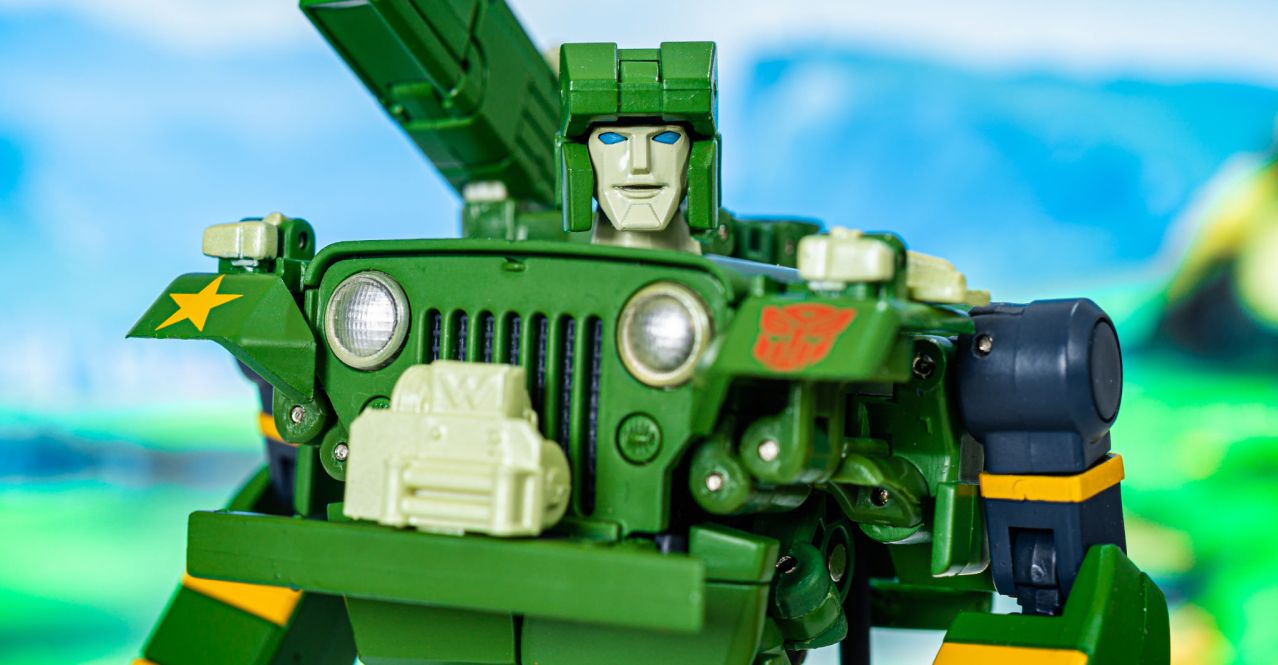 TFW2005’s MP-47 Hound gallery is online!  The Autobot’s trusty scout has finally joined the official Masterpiece ranks, complete with his military style Willys Jeep CJ-3B alt mode.  He features a look that favors the cartoon in bot mode, and also has a multitude of accessories to recreate scenes from it.  Articulation is great, and the transformation is complex but not crazy. There are some QC issues, specifically weak plastic and certain points that can lead to breakages.  Aside from that, it’s a great rep of Hound if you dig the cartoon focused bot modes.  Pairs great with recent MP-44 Prime and MP-45 Bumblebee releases aesthetically.

We’ve run him through a quick set, hit the link below to check out over 50 HD shots courtesy of TFSource!  He’s in stock and shipping now.

END_OF_DOCUMENT_TOKEN_TO_BE_REPLACED 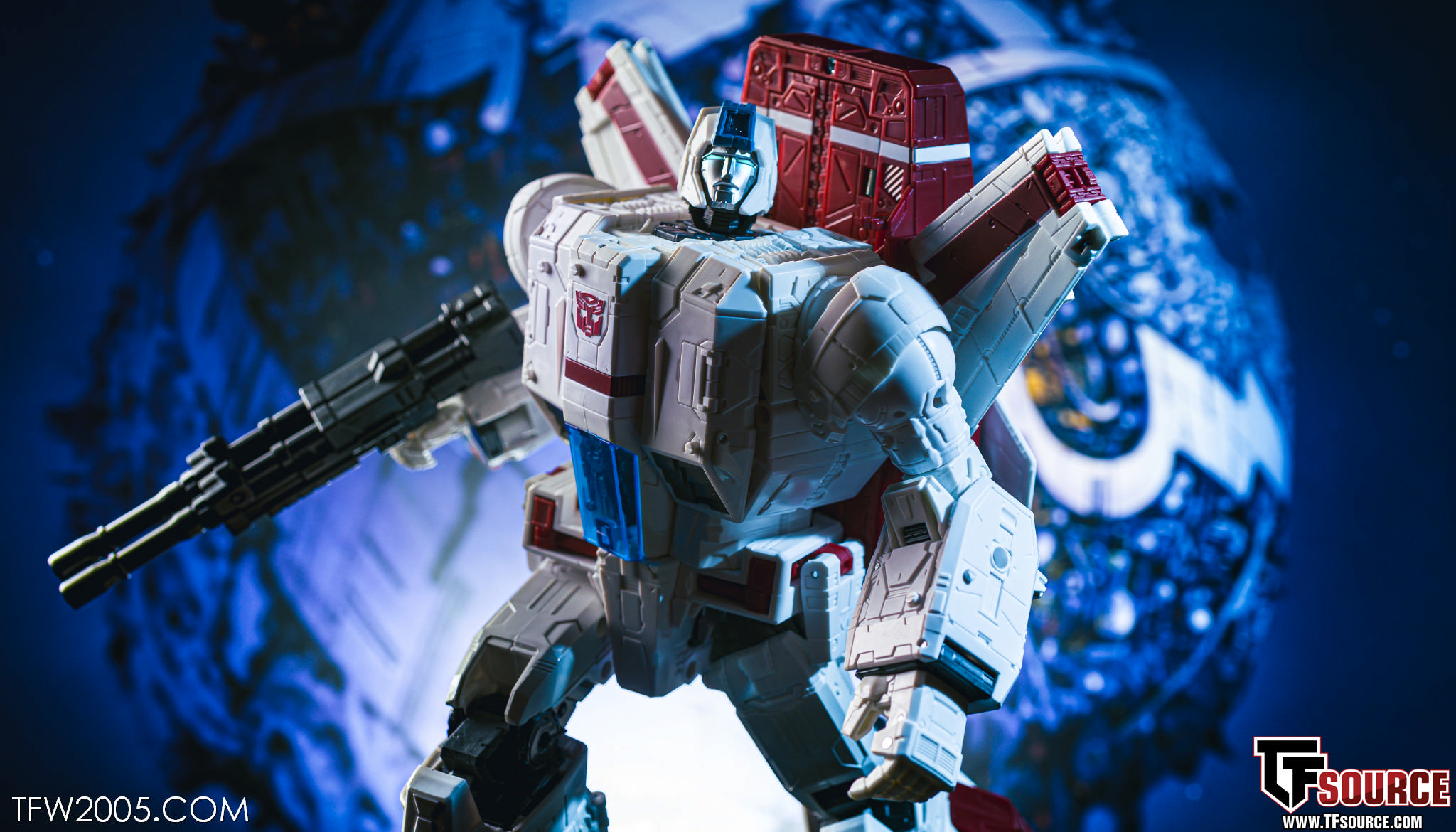 As time falls ever further behind us and we welcome the start of a new decade, it is time, once again, for the staff of TFW2005 to share their top picks from the year 2019.

Perhaps unsurprisingly, figures from the phenomenal War For Cybertron: Siege toyline have a strong showing in top place for many lists (nineteen times!), with Commander Class Jetfire standing out as the most frequent top pick (seven times) or placing as a runner up (eight times).

Continuing its own annual tradition, the long-lived Masterpiece line makes its presence felt in a majority of our lists (fourteen), albeit predominantly as runners up, with some special mentions for MP-43 Beast Wars Megatron (yeeesssss), and the latest incarnation of Optimus Prime, MP-44 Convoy 3.0.

The Studio Series line also proved highly popular for the team, with fifteen of us opting to nominate a range of figures either as top picks, or in runner up lists.

This exercise really emphasizes just how lucky we are, as a community, to have such an impressive variety of Transformers available to us. Here’s hoping that we continue to see this through 2020 and beyond.

We don’t want to spoil too much, so you’re now invited to jump on in and see what the team had to say. We’d also love to see what your own lists look like – please take some time to let us know.

END_OF_DOCUMENT_TOKEN_TO_BE_REPLACED 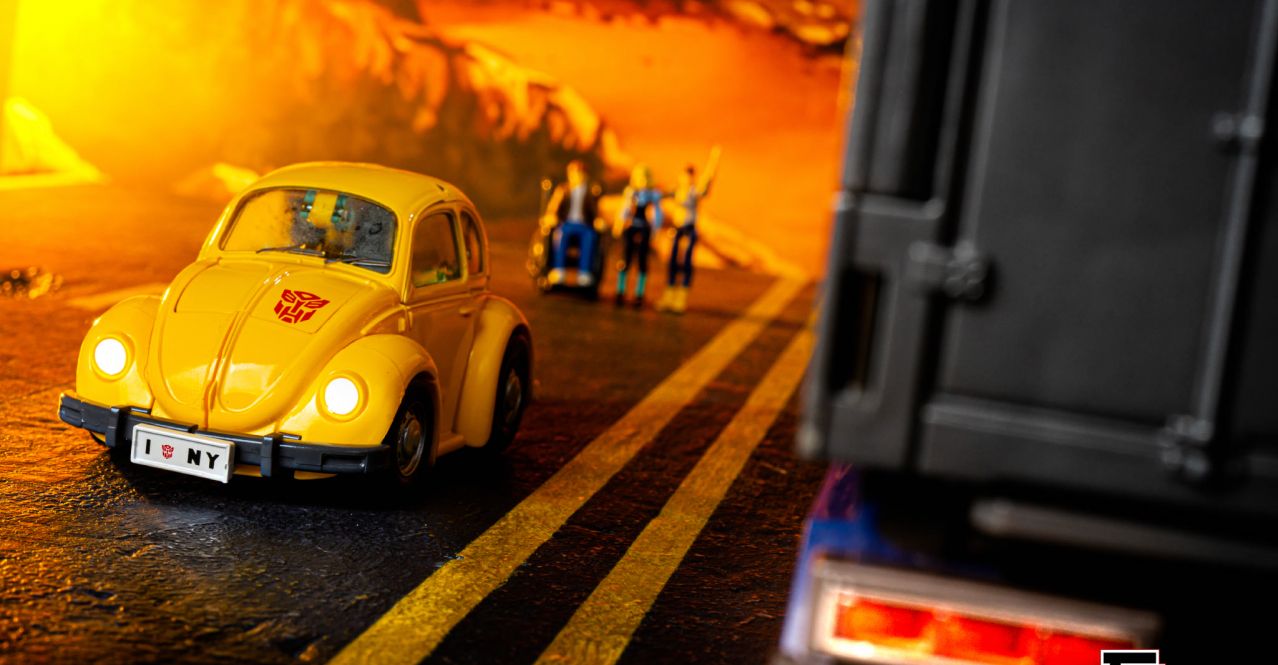 Happy New Year everyone!  While everyone is recuperating and celebrating the new year we are sharing out a gallery for one of the last Masterpiece releases of 2019 – MP-45 Masterpiece Bumblebee 2.0.  A lot of the fandom is torn on this little guy, some digging him and some thinking he wasn’t necessary in the grand scheme of things since the original was good enough.  Version 2.0 focuses on the animation look in both modes, capturing his overall proportions and look as seen in the original G1 cartoon.   He comes packed with a pistol, laser effect, I Heart NY license plate, 2 additional faces and a Spike Witwicky articulated figure similar to the one that came with MP-44, but without the hard hat.  He has a wide range of articulation and movement allowing for two handed gun aiming and dynamic posing.

My initial reaction was that he, and MP-44, were unnecessary.  MP-44 in hand changed my mind.  I handled an early copy of this guy, and wasn’t impressed due to some floppy joints and tabbing.  But the retail edition featured here tightened things up and he wound up being fun to mess around with.  The vehicle mode is really sharp if you are into the toon look, and that’s where he’s staying on the shelves.  Bottom line, as with a lot of the recent MP releases – if you dig the toon look, he’s worth a pick up.  If you prefer your MP to be toy influenced, then sticking with V1 is the way to go.

Check out over 55 HD images of Beezy at the link below courtesy of TFSource!  He’s in stock and shipping now.

END_OF_DOCUMENT_TOKEN_TO_BE_REPLACED 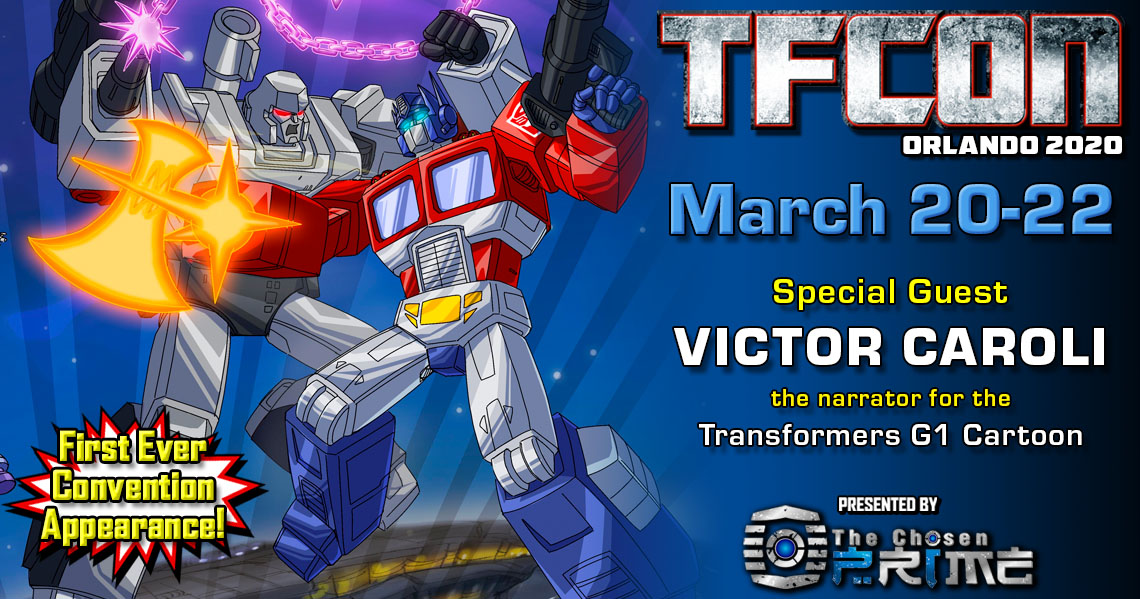 TFcon is excited to welcome Transformers Generation 1 Narrator Victor Caroli to TFcon Orlando 2020 for his first-ever convention appearance. He will be doing scheduled signings free of charge thanks in part to our presenting sponsor The Chosen Prime.

TFcon will take place at the DoubleTree By Hilton at the Entrance to Universal Orlando.  The discounted hotel room block is still available.

Tickets are on sale now at https://www.tfcon.com/tickets 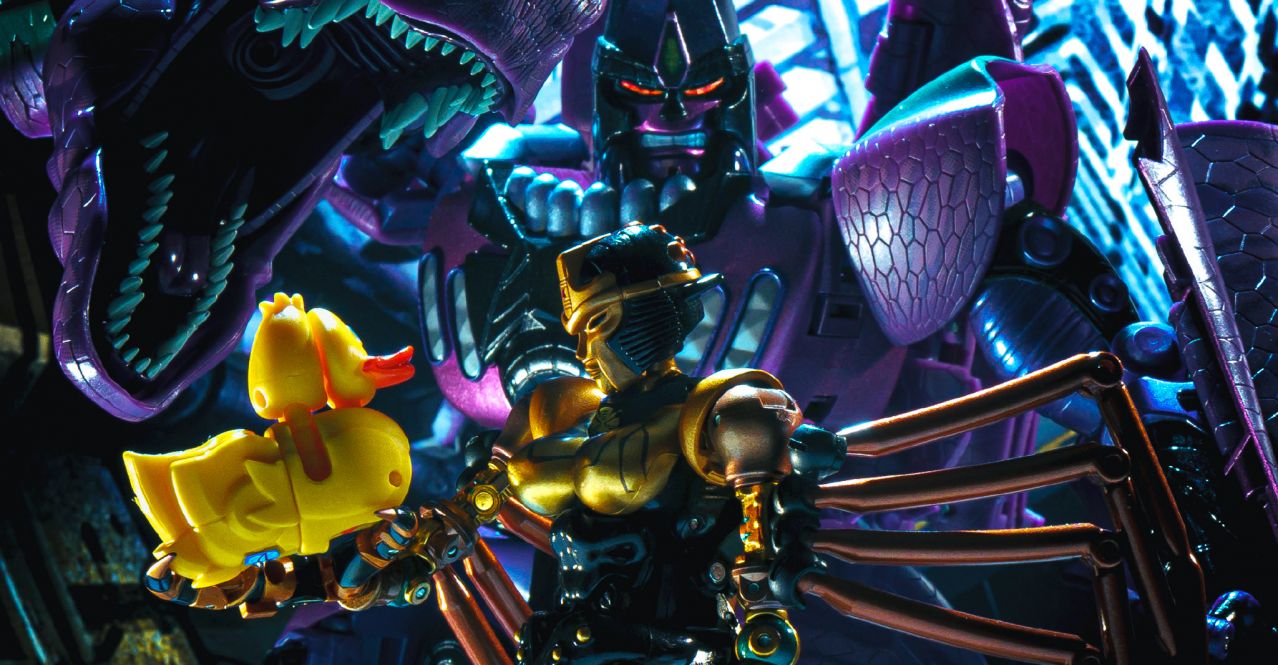 I like being a bad girl. And you know something else? Somewhere, deep beneath this squeaky-clean armor plating of yours… I think you like it too. BEAST WARS! is back with another Masterpiece offering in MP-46 Blackarachnia. BA was always one of the Beast Wars characters that didn’t translate well from toon to toy form (or vice versa), and until now, never had a really good show accurate offering. That changes though with MP46, as she hits all the notes in both modes. Engineering, paint, sculpt, articulation, accessories are all there and on point. If you are into the BW MP line, this is another home run release. We’ve done up pics showing what she can do so hit the links below for the full gallery of 60+ images!

She’s in stock and shipping now at TFSource!

END_OF_DOCUMENT_TOKEN_TO_BE_REPLACED 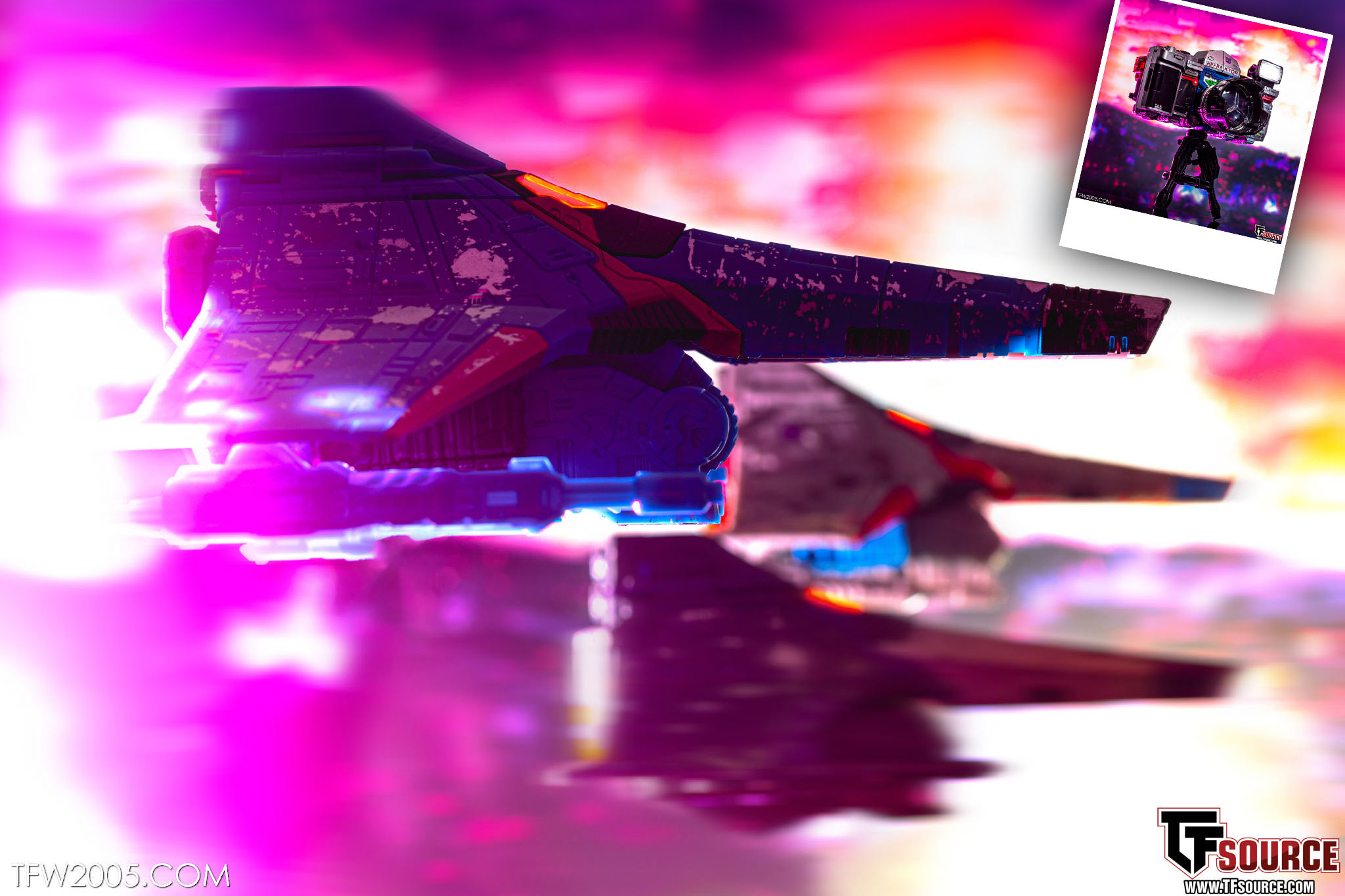 Time for another round of Siege catch up galleries!  Today we are taking a look at Thundercracker and the Refraktor (Reflector) Reconnaissance Team 3 Pack. Thundercracker completes the original seeker trio, pairing up with his brothers Starscream and Skywarp.  The Refraktor set gives us a really solid all in one offering for the photo squad, complete with toy colors and additional pieces for the original 80s camera mode.  The box presentation and companion booklet really expand the lore of the team with weapons and abilities all with photography based themes.

Both are well done and great rank fillers for the Siege line.  Check out their galleries below in full, or check some quick shots after the break!  They are in stock now at TFSource!

END_OF_DOCUMENT_TOKEN_TO_BE_REPLACED 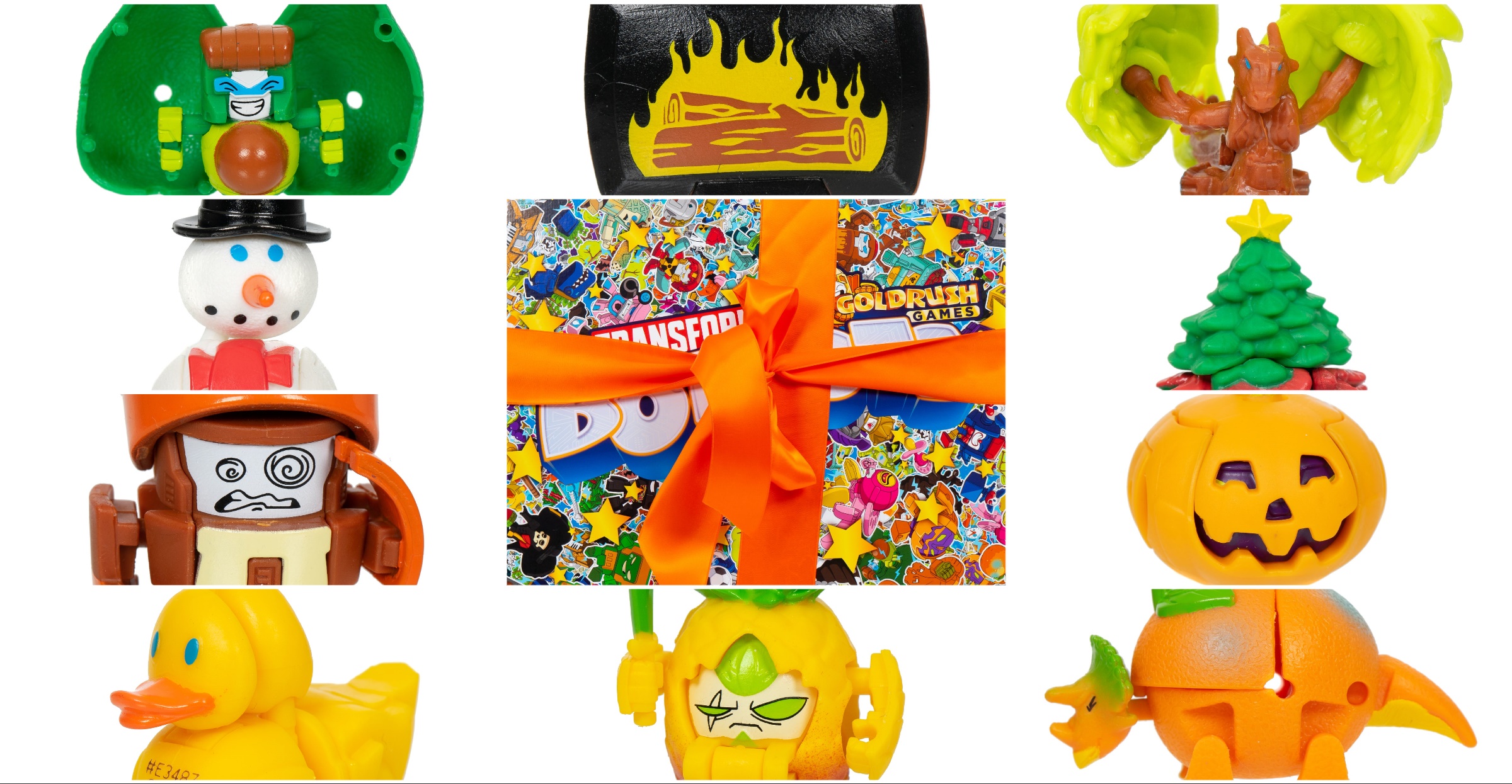 Hasbro sent out another promotional mailer for the Transformers BotBots line!  This round focuses on Series 3 (check our Series 1 and Series 2 galleries here), which is out on shelves now.  Series 4 is teased with a checklist sheet (they’ve even started showing up a bit early too).  Inside there were several 5 packs, 8 packs and a blind box case along with promotional materials for series 3 and 4.  The whole presentation is well done once again, including the box covered in BotBot artwork.  If you’d like to catch up one whats out there, Hasbro has a really good website for the line featuring info for everything released so far.  You can check that out here.

Read on to check out the promo material and some key shots for the little guys that made us giggle.   Hit your local shops and online retailers to grab your copies, they’re perfect stocking stuffers for the holidays!

END_OF_DOCUMENT_TOKEN_TO_BE_REPLACED 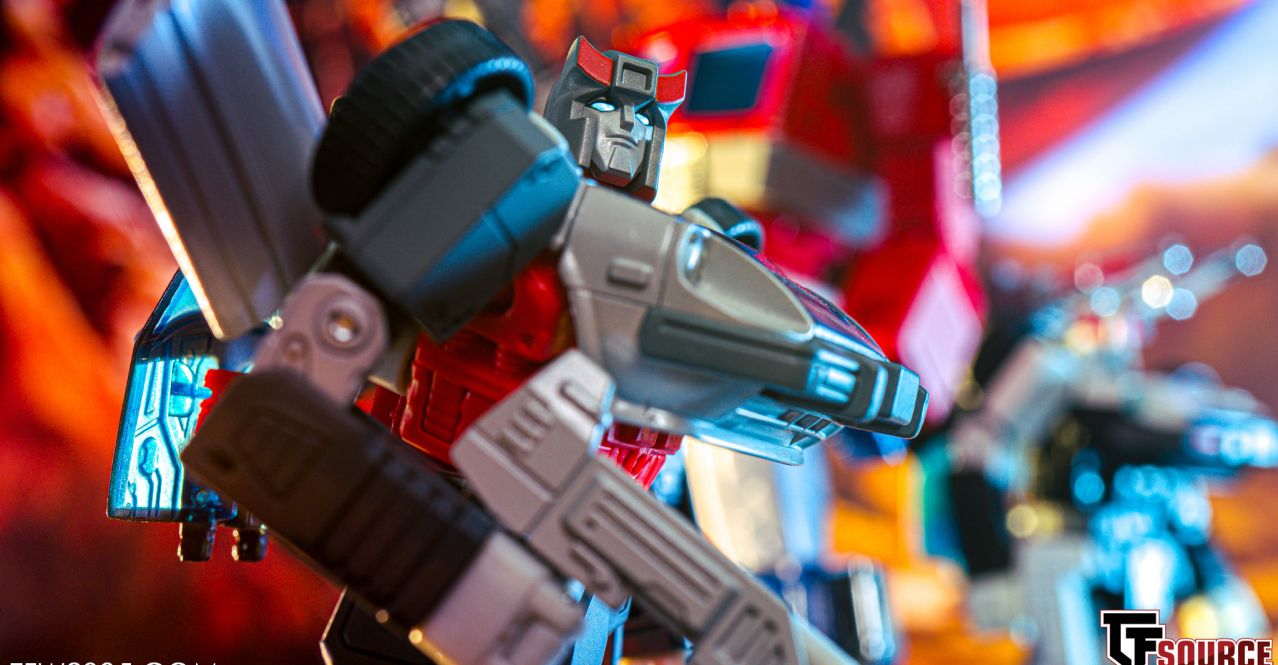 Thanksgiving, Black Friday and Cyber Monday have all come and gone here in the States, hopefully everyone had some good ones!  The holidays pushed back some galleries we had in the pipeline so today will start some catch up.  First up is the recently released MP-18+ Masterpiece Streak (Bluestreak).  This is the Anime / Cartoon inspired repaint of the original Masterpiece Bluestreak toy.  It features new heads, a more matte cartoon accurate color scheme and comes with additional laser effects.  Overall it’s a really sharp execution of the character so it comes down to your Masterpiece preference – toon or toy inspired.  Takara seems to be on a toon kick with recent releases so he will fit right in with MP-44, MP-45, MP-17+, MP-14+, MP-12+, MP-20+, and even Grapple, Inferno, Ratchet, Ironhide and Sunstreaker.  Read on to check out some key shots or hit the gallery link here to view the full gallery!

END_OF_DOCUMENT_TOKEN_TO_BE_REPLACED 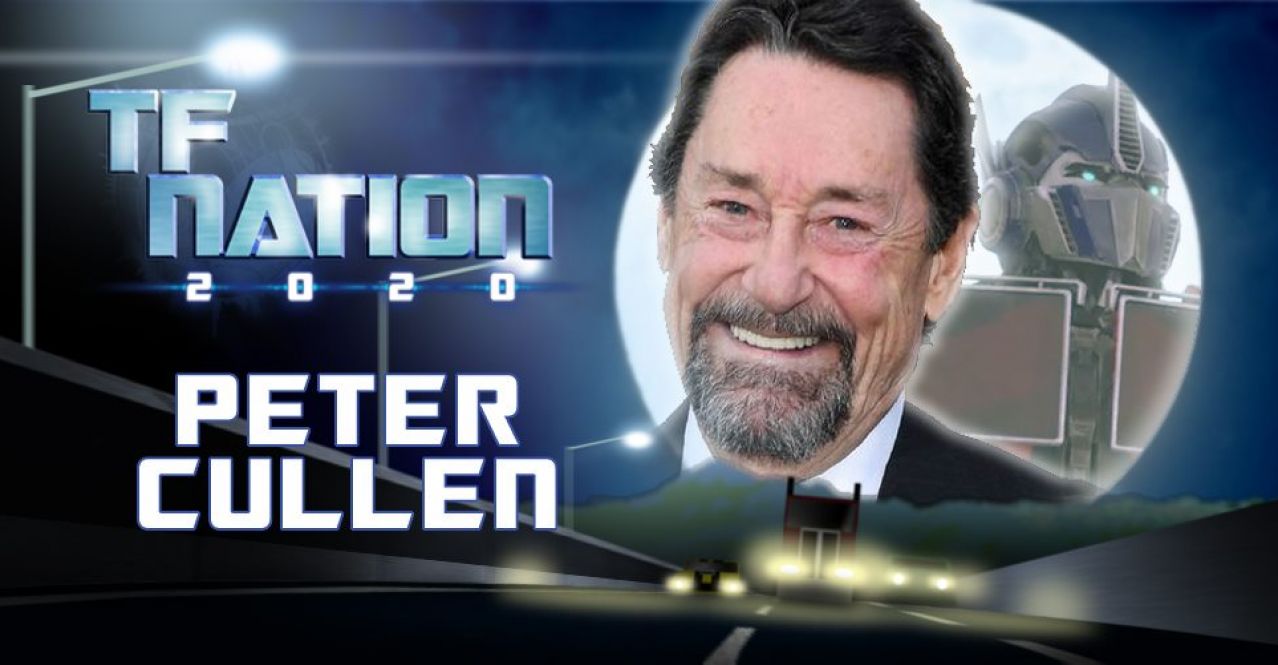 TFNation have announced an absolute bombshell this evening folks. They have arranged for the man, the legend, the voice of Optimus Prime himself, Peter Cullen to make his UK Transformers convention debut at TFNation 2020.

There’s not much else we can say about this huge news. For fans young and old, Peter Cullen’s voice performance as Optimus Prime is nothing short of iconic. So iconic, in fact, that there was a successful movement to bring Peter Cullen back to Transformers in 2007 where he reprised his role as Optimus Prime for the first live action movie, and then continued to provide his iconic vocal performance for the various movie sequels including the most recent live action movie, Bumblebee, as well as the animated series Transformers Prime and its sequel Robots in Disguise.

This is truly an amazing achievement for TFNation and an incredible opportunity for fans who’ve never been able to make it to meet Mr Cullen on his international and US convention appearances in the past. To guarantee a chance to meet Peter Cullen, TFNation are offering a special, “Leader class” package which includes a signing and early seating at Peter Cullen’s panels. For more information please visit the TFNation homepage. 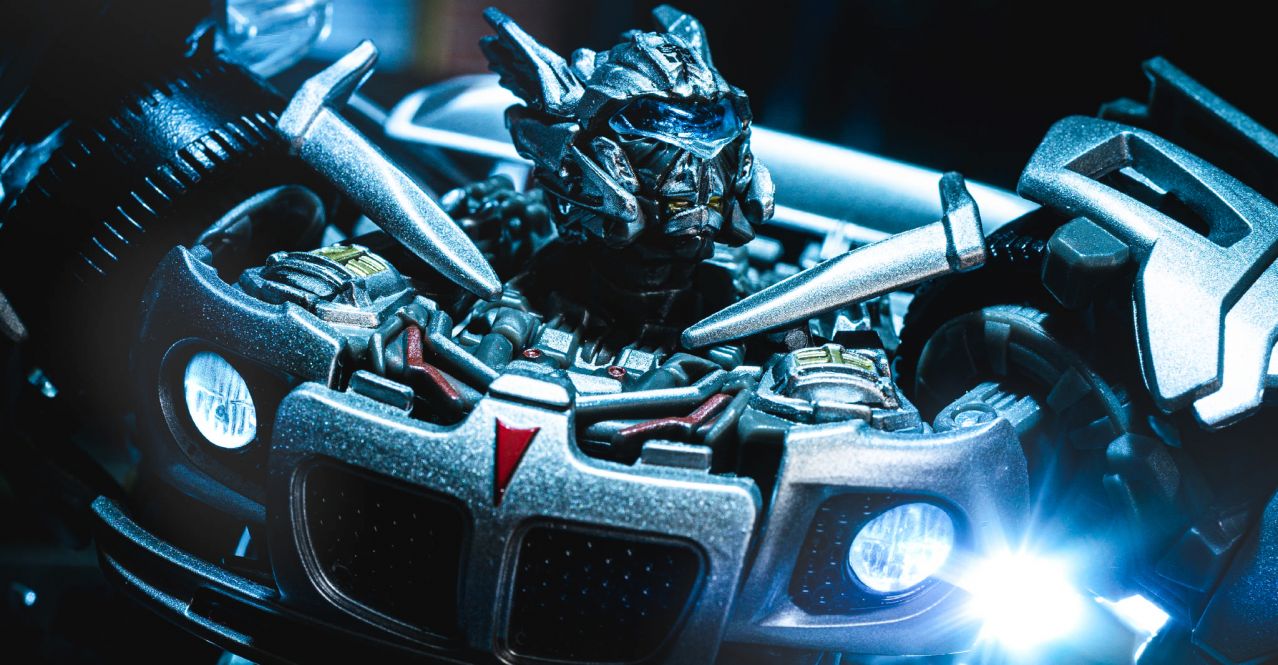 What’s crackin’ lil bitches? The Masterpiece Movie line continues to fill in the Movie 1 ranks with MPM-9 Jazz!  Keeping his look as the all silver Pontaic Solstice, Jazz comes ready for battle with his blaster, Sam running with the Cube, and an add-on robo spinal cord so you can recreate his tragic death at the hands of Megatron!  Yes, he does split in two, a feat of engineering since it essentially requires transformation elements to be in two separate halves.  He stays in scale being the smallest of the bunch both on screen and in MPM form.   All in all it’s a great piece, one of the MPM line’s sharpest in both modes IMO.  Read on to check some key pics or hit the full gallery here for 55+ shots!