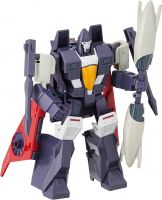 Via Amazon we can share for you new stock images of the recently revealed Transformers Cyberverse Ultra Class Energon Armor Ramjet.

This figure was first found in Singapore and then in Chile, in another case of a Cyberverse figure that has showed up without any official announcement. As we can see, this is a completely new Ultra Class mold featuring the “Energon Armor” gimmick and packed with the “Transformers Bumblebee: Cyberverse Adventures” logo. The new stock images give us a better look at robot and alt mode also revealing Ramjet’s weapon. According to the Amazon listing this figure will be ready to ship by Oct 14 – Nov 23 and you can pre-order it for $20.99.

See all the mirrored images after the jump and then sound off on the 2005 Boards! 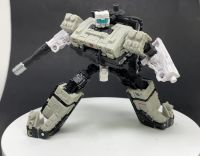 Via PrimevsPrime on Youtube we have our first in-hand images of the new Transformers Kingdom Deluxe Slammer.

Slammer is a completely new Deluxe mold which is similar to the War For Cybertron Weaponizers/Modulators, so he can split in part that can become weapons for other figures. It transforms into a tank inspired by the G1 Metroplex non-transformable companion Slammer. We also have comparison shots next to other War For Cybertron figures like the Centurion Drone, Sixgun and Warpath.

Check out all the images on this news post, as well as PrimevsPrime video review, after the jump. Click on the discussion link below and let us know your impressions on the 2005 Boards!

A very nice upgrade kit set for fans who want to improve their Masterpiece Optimus Prime. This kit is expected for release by January 2022.

Check all the mirrored images on this news post and let us know your impressions on the 2005 Boards!

We have some updates about Transformers Rise Of The Beasts filming over the world: Filming In Machu Picchu is finished, new extra shots in Montreal & information about new locations In Peru

Leading actor Anthony Ramos, via his Instagram account, showed a brief video during the filming in Machu Picchu. At this moment, filming in the ancient Inca fortress has finished. Some Peruvian media sources and tourists in the area were able to share some images with Anthony Ramos and Dominic Fishback shooting some scenes. As we can see from the images, production used several air drones for the filming.

We have also known that the filming crew has just flown to Tarapoto, a city near the Peruvian jungle, to continue their work. Still no news of any scene involving the cars.

While, in the other side of the world, the filming is back in Montreal for a new car scene in the streets with Mirage and some police patrols. We have images of some 90’s-style props and scenery that was used in the city. To top it all, we have images and a video of the supposed “Maximal cave” and “Manhole” from the set in Monntreal.

END_OF_DOCUMENT_TOKEN_TO_BE_REPLACED 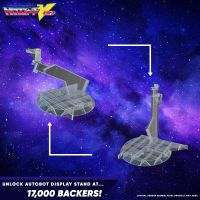 The official HasLab Victory Saber website have been updated with the reveal of the second tier of this crowdfunding campaign: the Autobot stand.

This is an articulated display base for Victory Saber for robot and alt mode as we can see from the images. This stand will be unlocked once the campaign reaches 17000 backers.

The official Transformers Instagram account also posted that Victory Saber prototype will be on display at Fan Expo Dallas this September 17th to 19th.

Don’t miss the chance to support the Haslab Crowdfund Transformers Victory Saber which has got more than 7800 backers at the moment and it’s closer to the goal of 11000 backers.

See all the images after the break and join to the ongoing discussion on the 2005 Boards! 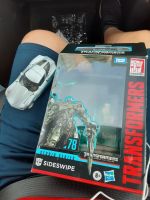 To our surprise, Reddit user justagamer135 has shared photographic proof of his sighting of the new Transformers Studio Series Wave 14 Deluxe SS-78 Revenge Of The Fallen Sideswipe at US retail.

According to the information shared, SS-78 ROTF Sideswipe was found (and bought) at a Meijer store. This is another case of a figure not officially revealed yet that shows up at stores (and we even had seen in-hand images before). He’s the only new mold on this wave which should consists of SS-78 Sideswipe, SS-86 Blurr SS-86 Kup and SS B-127. Time to check your local Meijer stores to try to grab this figure for your collection.

X-Transbots doesn’t stop! Via their Facebook account they surprised us with the color renders of their next project: MX-XXXV Caravaggio (Masterpiece Scale G1 Hauler).

We still have no concrete information about price or release date, but stay tuned with TFW2005 for more updates! See the mirrored images on this news post after the break and then sound off on the 2005 Boards!

Via PrimevsPrime on Youtube we have our first in-hand images of the new Transformers Generations Shattered Glass Collection Jetfire.

A redeco of his Siege Commander class figure, Jetfire here sports a color scheme that is very faithful to his villainous Shattered Glass incarnation. The images give us a closer look at his robot and vehicle new deco, as well as all of his accessories and some shots next to War For Cybertron Shattered Glass Optimus Prime. This figure is officially listed as a Hasbro Pulse exclusive for $91.99 and expected to be delivered in January 4th, 2022.

Check out all the images on this news post, as well as PrimevsPrime video review, after the jump. Click on the discussion link below and let us know your impressions on the 2005 Boards! 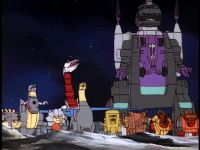 You now watch the classic G1 Transformers series for free and remember the classic episodes and characters that defined our franchise. Hasbro Pulse YouTube channel uploaded season 1 and season 2, and now the complete 30 episodes of G1 season 3 are available for free streaming.

Hasbro has stated that Season 4 will be uploaded next weekend! This is in order to support the screening of Transformers: The Movie 35 Anniversary at US theaters. Click on the discussion link below and share your impressions with us on the 2005 Boards!

Prime 1 Studio Facebook have updated an official gallery and product information of their upcoming War For Cybertron Optimus Prime Statue.

These statue is planned for Prime 1 Studio Museum Masterline line and it will come in two versions: Standard and Ultimate, each featuring different parts and base. Read on for more details:

Price and release date are yet to be announced, but stay tuned with TFW2005 for more updates. You can see the full gallery of each statue here: Standard version or Ultimate version via Prime 1 Studio Facebook. Alternatively, you can see some key mirrored images after the break. Click on the discussion link below and share your impressions on the 2005 Boards!