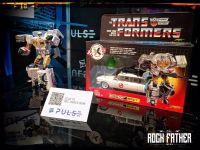 Thanks to @ToyBook on Twitter, we have a look at the packaging of the recently announced Transformers Ghostbusters Mash-Up – Ecto-1 Ectotron Figure, that was on display at Toy Fair.

It was a nice surprise after the first official reveal and the announcement of a new 5-issue comic featuring the new character. The packaging shows an incredible G1-retro packaging style with a beautiful art by artirst Emiliano Santalucia. The back of the box shows Ectotron’s tech specs, revealing his function as a Paranormal Investigator.

The ECTO-1 ECTOTRON figure will be available exclusively at GameStop in the US starting Summer of 2019 and for pre-order starting February 15 at GameStop. Check out the images after the jump and then join to the ongoing discussion on the 2005 Boards! 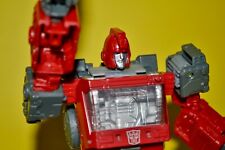 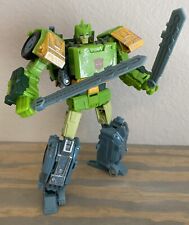 It's why I love Rescue Bots, they were affiliated with Autobots in the show but they were for the most part their own people just living on Earth, doing the same jobs they did on Cybertron, and adjusting to their new home. I would really like a comic series dedicated to the idea, just civilian Cybertronians that don't want to fight a war but rather live their lives for themselves doing whatever brings them purpose on Earth.

Ectotron: "Gigawatt! Go back in time and assassinate Megatron!"

Gigawatt: "Great Jahusivatts EctoTron, That could destabilize the timeline and cause untold destruction!"

Maverick: "Pretty sure they'll leave you alone unless you shoot at them. Speaking of which, I'm going to go shoot at some of them."

Ectotron: "Wai-!" *Maverick flies off and Gigawatt goes back in time, but since Ectotron never said when, well, it could be a while before he takes out Megatron.*

For anyone still looking for this in Canada, EBGames stores received quite a few copies recently. My local store had a small stack of them on the front counter. They're also selling them on their website with free shipping. At first I wasn't that interested in Ectotron but now that I know the Top Gun and Back to the Future crossovers are coming I picked one up for my future 80's movie TF collection. I also bought the Takara Tie Fighter that turns into Vader a few years ago. I like that one but the new Millenium Falcon was not very good so I sold it.

Anyway I'm liking these crossover figures and Ectotron looks really nice in person. It's definitely pricey for what it is and it would be nice if the next two crossovers were cheaper but that's probably not going to happen.

Just stumbled across Ectotron on Amazon (Prime) for $46.

I was wondering the same about Marvel blast effects. Blast effects being compatible across multiple unrelated lines would be a great cross sale.

I hope the new Plasma Series streams will be blast effect compatible!

Maybe someone on Shapeways will come up for something for Sound Barrier ?

I think some forum member here did some sketches of this, and it was so cool.

It was Spudmunkey. He drew up some Botbots of the GB equipment:
2D Artwork: – Ghostbuster BotBot WIP

Too bad there's no way anybody could afford a fully transforming Optimus or Ectotron upscaled for 3.75" figures to ride, and Ghostscream in scale would be as big as a small R/C plane. Hmm, maybe the old "Human Alliance" fiures ould be the right scale… or down to the pilot-figures of the old '90s "Flying Fighters" toy planes on joysticks.

Battlemaster or miromaster packs would be wonderful equipment bot ideas! I think a Ghost version of MP11 Starscream would be a good release to support. The Earthrise voyager would look nice in a ghost deco, but wouldn't scale well with OP-GB and Ecto. Beyond that I don't think there is a good chance of ghost decos.

Looking at other brands in their stable already: We know the Star Wars and Marvel Crossover figures didn't get the same love. I still think there might be something to it, but I feel even the recent Takara offerings do the same thing I'm not interested in and making the robot modes based on the other property instead of an existing or new Transformer. I wonder if a weaponizer could be made that would be useful with Marvel Legends figures?

GI Joe again makes good sense but many of the crossover figures were non-transforming. I have the Serpentor and think it is great despite what I said about robots above. The Old Snake with the B.A.T.s is great. It is too bad that GI Joe isn't currently doing well, because I would to see GI Vehicles turning into Transformers characters. Making them heavy headmaster retools and having the heads be GI Joe characters in Nebulon suits would have been fun.

Power Rangers probably has really good potential. Either the more animal/creature or the vehicle zords as Transformers that combine is obvious.

There are a few other of Hasbro's properties with really good crossover potential in terms of how good the toys would be, but would probably be a bit obscure. Then of course other properties that have wide appeal but might make for weird combinations.

Start with mainlining MP-10G or an Earthrise Optimus based on its deco (and if the latter, rescale Ectotron to match).

Ahhhhh that's right, I forgot all about that.