2005 Boards member Sloloris made the sighting and took plenty of pictures of the piece in package. He spotted it in a mall in Guangzhou, China. It retails for 999 RMB (~US$160). 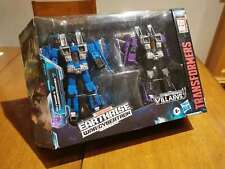 Actually I like some of the paint apps…and the Dragon is different but I could live with it as long as Optimus can.

You guys are looking at the wrong thing….DO YOU GUYS SEE THAT DISPLAY STAND RIGHT BELOW IT!!!

It might just look like nothing….but the figures are transformed corrected….it's almost like they enjoyed it(sort of)….buy all we got in the States are Opitmus Primes with truck legs butt humping Starscreams that have jet arms and stuff.

Its double the price.Really? Pass. .

If it's "double the price" it's becasue toy prices are heavily subsidised in some markets.

Can't believe that this shit piece sold out!!

Thank you for your considered insight.

Is BBTS really already sold out on the preorders for this thing?! WOW!

Can't believe that this shit piece sold out!!

i think it looks pretty neat in combined mode, just not so much apart. it'd look cool on a prime shelf!

The normal version of Ultimate Optimus Prime is already shelf warmer,i can forsee this piece to be the upcoming sheflwarmer too??

That trailer is admittedly really [email protected]#$ing awesome. I think Ultimate Prime is a crappy figure, but if this was stateside, I'd consider getting it. Not necessarily full price, but would definitely consider it and not outright shun it like the regular one.

The red grill is admittedly a disappointing thing, but you could find a way to spruce it up if you're only gonna display it in vehicle mode anyway.

Its double the price.Really? Pass. I'm still waiting for in-hand pics of the Dark Nightwatch Jet Prime. The only way I would get the Ultimate Prime mold is if it had a complete non Optimus paint scheme and was cheap.

This thing is so crazy that I actually kinda want it.

Is BBTS really already sold out on the preorders for this thing?! WOW!

It'll be cheaper wher Im at. That dragon-motif trailer is going to be paired with the Deluxe 'fire-burst' ltd edition (Walmart) Prime..

So so very close to this. Please, won't someone think of the Jack Burton?

*shudders* That is ugly. The cab is just awful. The price is a jawdropper.
And I see we're not the only ones with Leader Class shelfwarmers. lol

I'm getting another one. Armada Oprimus is one of my favorite Primes.

So much for a bad Photoshop hoax.

Its just that fugly I guess.

But check the price skyrocket.

I would really like to see images of the figure before judging it. The combined mode looks interesting since the armor is red, blue, and gold. The blue looks way better than the turquoise IMHO. I'm surprised there weren't any official images before release. We all know someone will buy it, just be man (or woman) enough to give us some high quality images.

looks like a KO to me personally
did hasbro hire some crazy KO maker to design this?

i want it, i might try to get that, it is so batshit insane that it is worth owning

I wanna see out-of-package pics first though. Also, all the red reminds me of this guy, so if I DID end up getting this, I'd probably call him Ginrai. XD

I actually have a LOT of nostalgia for Armada Optimus, possibly part of why I like Ultimate Prime so much…

Glad they made it "Limited" edition…, so at least not that many of them clogging shelves eventually being dumped into landfill.

This ultimate movie Prime should be the worst prime in term on sales figure… there were tons of these (the regular ones) unsold from BlackFriday even almost half off; and now being discounted a bit ~$10 (@TRU)… these are guarantee shelfwarmers.