Ozformers Transformers Collectors Australia has posted some details on a Transformers Animated Promotional event that took place in Australia this past weekend.

The event centered around a contest held by Australia’s Cartoon Network. Australian News site “The Warrnambool Standard” posted an article on one of the winners here. Kids under 15 were able to submit robot designs using parts from the Transformers Animated cast. 5 winners were chosen to win a prize pack and also got to meet designer Eric Siebenaler.

Along with doing a meet and greet, and doing some drawings for the winners, Eric was kind enough to share the following information with members from Ozformers:

Animated:
A new, smaller Animated Bumblebee mold is in the works. It is intended to be more in scale to other figures, and will come with a larger accessory.
A new Voyager Bulkhead repaint is being done. It will not be a new character, following in line with Animated repaints like Rescue Ratchet and Elite Guard Bumblebee. Hasbro will be doing more repaints without making them into new characters.
The Jetstorm/Jetfire toy concept was one he has had in mind for several years. It finally came to pass in Animated.
There has been some planning for a Fourth season of the series.
Arcee will be a new Deluxe class mold, and won’t be entirely pink.
Animated Swoop’s weapon was designed to have the flame spikes extend when pulling on the chain, but it did not pass safety tests.

Transformers, ROTF:
No Activators or Unleashed.
Eric is working on 2 of the size classes for this line, Voyager and Scout class.

You can read some more on Eric’s comments, and about the event here. 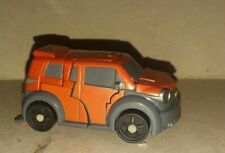 So? how much air time did cybertron mode Megatron get?

Autoboot Camp had three characters use the same design throughout it.

Although I could see the toy being either/or. I'm just going to wait and see with this one.

Why would you think that?

Because he is shown in earth mode in the show more than Cybertronian mode. I'd love to see a Cybertronian version and Wasp repaint.

im very curious to see what this new BB is-im happy with Cyb. mode or earth mode, but im curious to his accessory. that and im PRAYING he has stingers that are like the ones in the show (something that coulda/shoulds been done for the Deluxe)

Maybe he comes with the Autobots' couch?

Regarding the use of scout class in the upcoming ROTF line, my suspicion is that this is for scale but should also be good for profit. It'll be the perfect excuse for a new camaro Bumblebee mold to repaint ad infinitum. And by making such characters smaller, they'll be better able to make a large Devastator look massive and more correctly scaled. Since many of the autobot cast are returning unchanged, there's the opportunity to do new molds of old characters at smaller class sizes; like a Deluxe Optimus and Ironhide. Can't wait for more info.

I think Bumblebee is an earth mode version, smaller than a deluxe, but with an accessory that can fit with it in deluxe packaging.

Why would you think that? We already have earth-mode Bumblebee in Activators, Legends, Happy Meal, and Deluxe class. Anyone with scale issues has more than enough options to choose from. A Cybertronian BB with Wasp and Cliffjumper retools would be awesome. But maybe it'd be just a bit too awesome to happen, so you could be right.

But I also think it's a good sign in general. I don't get overly hung up on scale, but I like the idea of packing in an accessory so they can get the size more accurate. It also opens up the options to do things which might not be possible any other way. There's a lot of background stuff in the cartoon that wouldn't normally see toy form. It would also be an excellent way to do some of the human characters. Hopefully the 'accessory' is something cool, and not like the random traffic light thing that came with Prowl.

I know . I was just messing around.

I know . I was just messing around.

That sucks. Animated Anything >>> Movie Anything

Actual transforming construction vehicle?
That'd be pretty wonderiffic if I might say.

Well, that makes alot of sense for me, and still gives hope for toys later!

Eric has a great story to tell about what his original plans were with the Animated Constructicons, and I hope he's at BotCon next year for someone to ask him about it, because if I try to recall it all, I'll probably get something wrong or mis-interpreted.

The short version though, is that he originally wanted a full team of Constructicons in Animated, introduced throughout a season or two so that they could get decent character development and stories centered around them (as opposed to just dumping them all into the one episode and get no decent character development, like say, Gen1). And then down the track, they would then have been made to combine, with new toys to match.
Plans changed after two were already introduced, and now it is not on their Animated agenda to release them in the near future as toys.

You're more than likely quite correct about that, now that I think about it. Still, that does raise the question: when WILL we see Animated Constructicon toys? It would seem a major oversight not to release toys for two such prominent characters, but if the second movie line has anything like the longevity of the first, we might well into 2010 before the way is cleared for another line to use the Constructicon name. Will Animated still be going by then?

If I recall correctly, Kickback said current plans were to have Animated go to 2011, so… yes.

Y'know maybe they wanna wait after the movie when Constructicons get popular to sell 'em.

No Activators, no money from me. I think the Activators is the most brilliant idea out of Hasbro in years. Those little devils are FUN! They transform in seconds, and they show an amazing amount of detail for such small figures.

I was really looking forward to movie Activators. Oh well…. again I am disappointed by Hasbro.

I wonder what the new mold will be?

I'd like Cybertron mode, but a more in scale Earth mode would be exceptional.

I'm almost certain that the reason is that there's going to be a bunch of Movie Constructicons and they don't want kids or parents to get confused, but they can't actually say anything about the movie product officially yet, so…

You're more than likely quite correct about that, now that I think about it. Still, that does raise the question: when WILL we see Animated Constructicon toys? It would seem a major oversight not to release toys for two such prominent characters, but if the second movie line has anything like the longevity of the first, we might well into 2010 before the way is cleared for another line to use the Constructicon name. Will Animated still be going by then?

Random speculation on my part, but what if one of the G1 homage characters is Skyfire? Don't know if Hasbro has rights to that name, but since one of the Jet twins in Animated is Jetfire, Skyfire could be the animated G1 homage that most Jet/Skyfire fans want. *head explodes*

Ooo, yeah, I certainly hope so. A new mold would allow it to be repainted into Cliffjumper and/or pre-beast Wasp, too.

Wasp, yes. But I'd rather get a Cliffjumper out of the current BB mold.