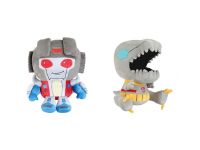 Unsurpassed in ego or ambition, Starscream is the scheming second-in-command to Megatron. His all-consuming hunger for absolute power overcomes what little reason there is in him, driving him to adopt ever more vile plots in his quest to unseat Megatron as leader of the evil Decepticons.

The strength of the Dinobot leader Grimlock is legendary. His prowess in battle is unrivaled. He respects strength beyond all else, but he doesn’t like bullies. It’s this that fuels his dedication to fight against those who would use their power for evil.

Secure your orders, then sound off on the 2005 boards!

New images from SDCC 2022 thanks to our team.

Well, well, well. I've been waiting for a Hound plush. Can't wait to get it!

Softness of plush before rashness of action.

The standard ones are 12 inches with a big ol head

The Unicron one is MASSIVE almost like a huge pillow

It's a real conversation piece.

I love collecting plush, I love collecting Transformers, I love Shockwave. Bought as soon as I saw this news post. I'm really surprised that he and Hound came out just now; I was honestly expecting a release closet to fall/winter, since the seeker announcement was pretty recent.

How big are these dudes? I\'m really tempted to get them

The standard ones are 12 inches with a big ol head

The Unicron one is MASSIVE almost like a huge pillow

How big are these dudes? I\'m really tempted to get them

These are adorable, and I just purchased the Grimlock for my 10 month old nephew!

I simply adore these things.

View attachment 29554308
Whaaat …. jeez,
It only a plush…i'll wait to see if another more reasonable chance to get it later ever happen 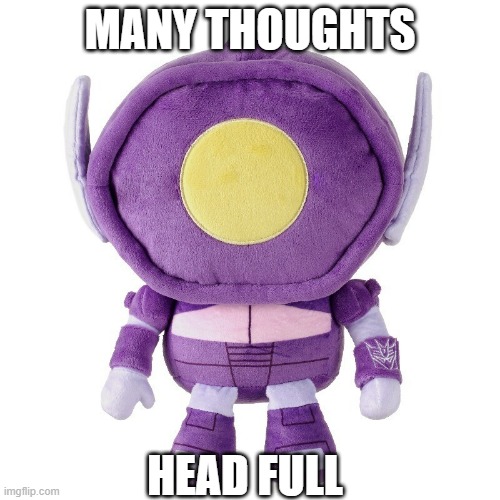 Revealed today on the live stream!

This San Diego Comic Con #SDCC we will be offering our first Catnip Bravo x #Transformers crossover plush and shirt. Only $29.99 plush and $19.99 shirt at #SDCC22 http://symbiotestudios.com/catnip-bravo Visit us at Booth 3249 for free pins and thousands of giveaways. Shirt art by @Jmanvelez

San Diego Comic Con #SDCC is almost here. Enjoy the tradition of Catnip Bravo at SDCC with these exclusive Surfing Catnip Bravo shirts and hoodies. Only $19.99 for the shirt and $39.99 for the hoody at #SDCC22 https://symbiotestudios.com/catnip-bravo Visit us at Booth 3249 for free pins.

Waiting for Grimlock to get back in stock – but this is awesome.

Still waiting on Grimlock to come into stock….

But this is cool too.

Now they have the excuse to make a thousand recolors of this.

If this is going to be the only other time I can get a skywarp, then I’ll take it