News related to the first Transformers Universe toy line from the early 2000s. Includes Robot Masters from Japan and the Universe releases up until 2007.

By way of The Spacebridge on Facebook, we can bring you a look at something rather cool. Back in the original Transformers Universe line in 2003, Hasbro had planned to release a redeco of G1 Thunder Clash / Machine Wars Optimus Prime as Motormaster. The line’s unpopularity with retailers curtailed the plans and other than the occasional prototype, nothing has ever been seen of this toy.

Today, The Spacebridge has added some Hasbro Color Guides for this unreleased Universe Motormaster to his Prototype Transformers gallery. These are the sheets used by Hasbro in determining the final deco, paint apps and other details – a rare look at the design process of any Transformers toy, but doubly so for one that was never released and is rarely seen. Be sure to check them out, along with all the other cool looks at rare and obscure items in that same gallery. END_OF_DOCUMENT_TOKEN_TO_BE_REPLACED

We previously reported on a new listing that had appeared in KB Toys computer system for a Transformers Universe Battle Pack. With thanks to our very own Kickback, we can reveal that this set is not, in fact, a new item, but a repack of the Transformers Classics Ultimate Battle set, which has previously been available in Universe packaging in stores such as Dollar General.

We have a special treat for all fans of rare and lucky draw Transformers today – A listing has appeared on Yahoo Japan Images for an extremely rare custom colors G1 Convoy (Optimus Prime) from the Robot Masters line. This piece was limited to ten only, and offered through TV Magazine. What is special about it, though, is that the colors were decided by the winner of the contest! The images also include a gallery of “runner up” colors, with the winner’s colors being the ones on the toy itself.

We have a double-bill update for you today – first, we bring you a full gallery of the Transformers Universe Chevy Aveo Swerve. Check out the extensive images of his vehicle and robot mode, as well as step-by-step photos of the transformation!
Second, our resources page for Chevy Aveo Swerve has been updated with all the information available on this new addition to the Autobot ranks, complete with a full review discussing all the finer points of what’s hot about this new Transformer.

The apparently Chevrolet exclusive Universe Swerve figure is has been shipped and in same cases received by buyers, as reported by the 2005 Boards’ own member zenith. Zenith has been nice enough to upload some shots of the figure, which can be seen here. We have also mirroed some of those images, which can be seen by clicking on the Discuss button. 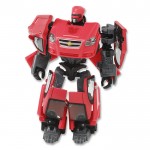 A prototype has been listed on eBay by another_buy for an unreleased Universe Menasor figure. Check out the one-of-a-kind item HERE at the auction, or click on the thumbnail to view all the photos!

A posting on Transformers newsgroup alt.toys.transformers reveals that Wal*Mart stores will have exclusive two-packs of Cybertron figures marketed under the Universe banner as a Black Friday (Day after Thanksgiving Day) shopping special. Available when stores open on November 23rd will be the “Opposites Attack” set of Excellion & Thundercracker and the “Search for the Pirate Moon” set of Downshift and Cannonball. These sets will be presented on a drop pallet that day, with over 200 sets available. Each set will sell for $10. The packaging for these figures have been seen already, as we previously reported a sighting of these sets in the Philippines in September.

Several posters from The AllSpark have reported finding two new Universe re-packaged two-packs at retail. All four figures were originally from the Cybertron line. The two-packs are:

Excellion vs. Thundercracker: Opposites Attack!
Downshift vs. Cannonball: Search for the Pirate Moon!

These items were purchased in the Philippines. Images of the front and back of the packaging can be seen here.