Players that participate will receive one Transformers TCG Booster Pack! If you’re in Las Vegas for the week, be sure to bring your cards and figure out strategies for utilizing Battle and Character cards! Share your in-game strategies on the 2005 boards! 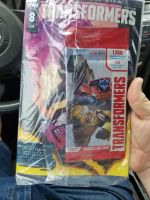 We have some good news for readers of the IDW’s new Transformers series. We can report that he booster pack promo deal for issue #7 appears to be rolling into issue #8!

Grab your copy of Transformers #08 this this week and look for your free booster pack inside your comic! Click on the bar to see the mirrored images and then sound off on the 2005 Boards!

Courtesy of Kotaku we have a new Transformers Trading Card Game reveal to share with you: The Firecons!

It’s time to heat the game with the new Firecons cards with impressive art by artist Marcelo Matere:

We are glad to see the Transformers Trading Card Game is bringing us a plethora of characters. Do you think we will also see the Sparkabots? Click on the bar to see the images on this news post and then sound off on the 2005 Boards! 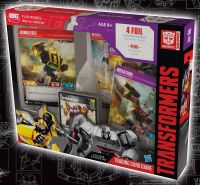 This 2-player set includes 4 foil character cards plus 40 battle cards and, as the name indicates, Bumblebee and Megatron cards. It will be available on May 3rd in the US and certain other territories.

Click on the bar to see the image on this news post and then sound off on the 2005 Boards! 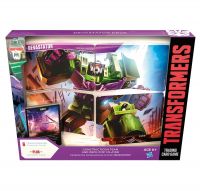 Via an article on ICv2.com we have images of the amazing Devastator Deck Box which is part of the new Rise Of The Combiners Expansion Wave 2 of the Transformers Trading Card Game.

The Transformers TCG: Devastator Deck contains all the cards one player needs to field the Constructicon team – and combine them to form Devastator, the six Constructicons and the battle card Constructicon Enigma needed to combine into the towering Decepticon warrior. Additionally, the box also contains a rules sheet and counters.

It’s good to notice that Devastator will be a standalone deck product, and it’s expected to hit shelves on March 29th, four weeks after the official release of the main series 2 booster packs on March 1st.  This means that the regular six combiners included in the first release would be:  Predaking, Volcanicus, Menasor, Optimus Maximus, Superion and Dreadwing. Devastator is an extra Combiner offered separately.

Check all the images of the box and the included cards after the jump and then sound off on the 2005 Boards! 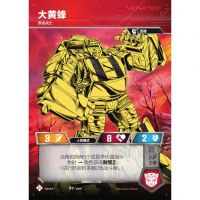 A post in the Transformers Trading Card Game Facebook Group brought the attention of fans about a special Chinese New Year Bumblebee Promotional Card included as a gift (together with the Omega Supreme Card) with the pre-order of the The Rise Of The Combiner Booster Pack Box via a Malaysian Online Store.

The card features a cool art of Golden Bumblebee (seems based on his Classics toy) written in Chinese. It was unclear how this card was available, but Wizards Of The Coast Brand Manager Drew Nolosco was kind to comment about his card on the Facebook thread:

So far, it seems it’s not possible to grab this card outside Asia, but you can check out the mirrored images attached on this news post and then sound off on the 2005 Boards!