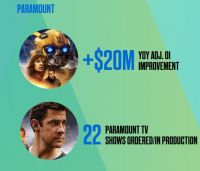 Thanks to a legal document submitted to the United States Securities & Exchange Commission yesterday, we have learned that Paramount Pictures will continue working with Hasbro to produce future Transformers movies.

“Paramount has several multi-picture production, distribution and financing relationships, including its recently extended agreement with Skydance Productions (“Skydance”) and a new overall deal with Hasbro Inc. (“Hasbro”). Under the Skydance agreement, Paramount and Skydance will continue to work together to produce and finance certain Paramount films, and Paramount has a first look on Skydance-initiated projects, including animated films. Paramount’s agreement with Hasbro involves the production, financing and distribution of live action and animated films based on Hasbro’s expansive list of properties. Paramount and Hasbro will also continue to work together on the Transformers and G.I. Joe franchises, including the first Transformers spinoff – Bumblebee – which is scheduled for theatrical release in December 2018.”

While we have heard of the agreement before, this is the first time we are seeing it on a legal documentation. It is also important to note that Transformers and G.I. Joe franchises are highlighted prominently and the fact that the term ‘first Transformers spinoff’ may indicate even more spinoffs in the future.

This submission came directly after Viacom’s annual conference call to close the financial outcome of Fiscal Year 2018. The parent company of Paramount Pictures reported a positive output after 2014.

“In addition to our internal executive team, we enter in — entered into multi-year relationships with Hasbro, which brought us the Transformers and G.I. Joe films.” said James ‘Jim’ Gianopulos, Chairman & CEO. “In film, we have a diverse slate of 13 theatrical releases versus fiscal 2018’s nine releases. These include the latest installment of the Transformers franchise, Bumblebee.”

What do you expect to see from future Transformers movies? Let your thoughts known, on the thread associated with this news post.