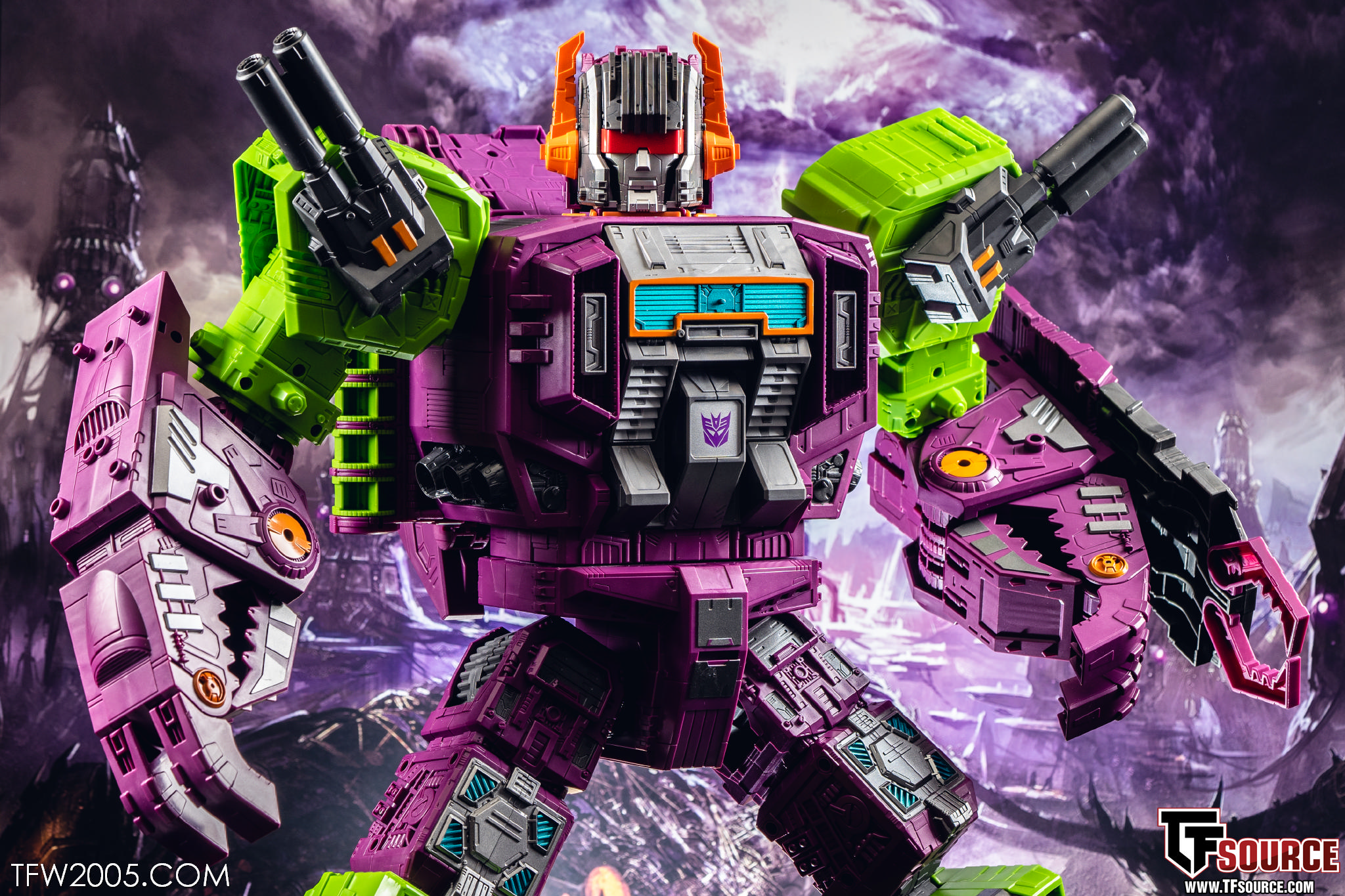 Time for another Earthrise gallery, this round is for the Titan Scorponok!  One of the last biggies need to complete the G1 re-dos, Scorponok joins Metroplex, Fortress Maximus, Trypticon and Omega Supreme to fill out your upper shelves.  He is another great G1 homage, taking the original vibe and general transformation then upgrading it for modern expectations.   He’s got rich greens and purples like the original, keeps the Headmaster gimmick (this time dual), and stays pretty faithful to the original scorpion and base modes.  I enjoyed running him once in hand, his base mode was a big fun display piece for the WFC Decepticons.  Engineering wise he handles like a Voyager or Leader – all the articulation points are there – he’s just way bigger.  That has been a welcome addition to the big guys over the last couple years, no shortcuts just because they are big.

Bottom line – great modern figure with good nostalgia for the old heads but holds it’s own now if you weren’t alive when his first toy was released :).

Check out our pics for him at the link below, we have 75+ HD shots, both basic and fancy available:

He comes courtesy of TFSource, make sure to grab your Earthrise pre-orders before they’re gone!

END_OF_DOCUMENT_TOKEN_TO_BE_REPLACED 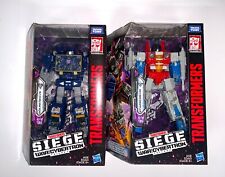 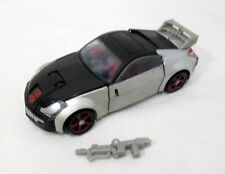 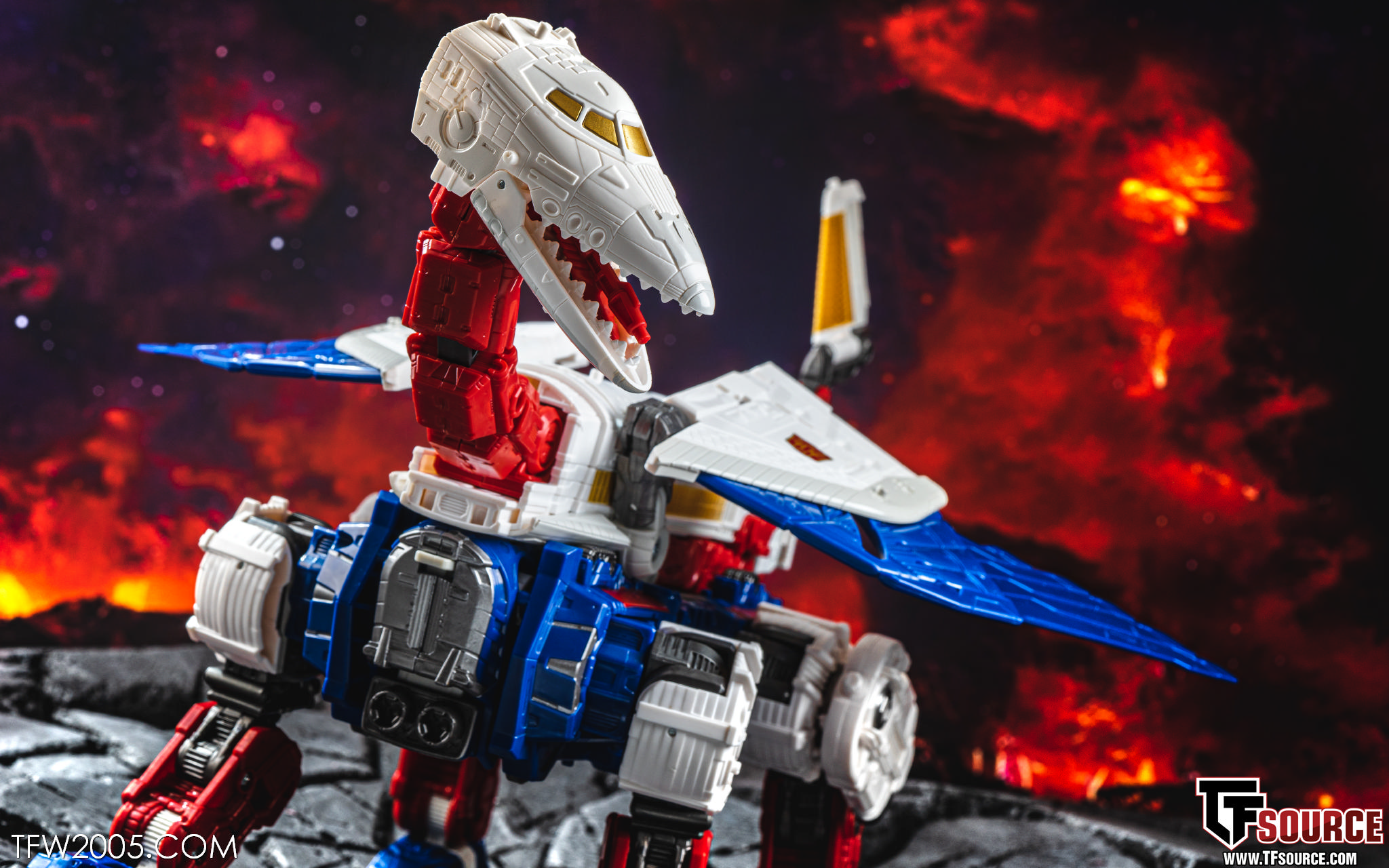 Time to take a look at this year’s Commander Class figure from Transformers Earthrise – Sky Lynx!  He joins WFC Siege’s Jetfire as that “bigger than leader, smaller than Titan” offering.  And he does that job well.  I’ve been looking forward to him since Toy Fair 2020 (man that was forever ago now).  While I personally prefer early run G1 characters, a select few movie+ ones hit a note with me and Sky Lynx was always one of them.  Is he ridiculous in concept, execution – yes.  Was the character in the show even more silly – yes.  Is he awesome – also yes.

The Earthrise Commander version captures the essence of the original – larger, space shuttle, stark white with red blue and gold mixed in, combination, bird and lynx modes.  Same transformation style with a couple extra flips and twists mixed in. Something new I thought was cool – an additional base mode where the lynx becomes the base for the shuttle launch pad.

I had a bit of a time with some engineering points – hard to keep together in combined mode.  Bird legs are floppy af.  Wings don’t hold position tight.  None of these really kill it, but it’s not as fine tuned as I would have liked.  Once I got him in his shelf pose though, he was fine an will be fine hanging with Omega and Jetfire in the Space Force corner.

We’ve run him for a set so hit the link below to check out over 40 HD shots, both basic and fancy.   We’ve also attached some to this story after the break.

He comes courtesy of TFSource, and is in stock / shipping from them now!

END_OF_DOCUMENT_TOKEN_TO_BE_REPLACED 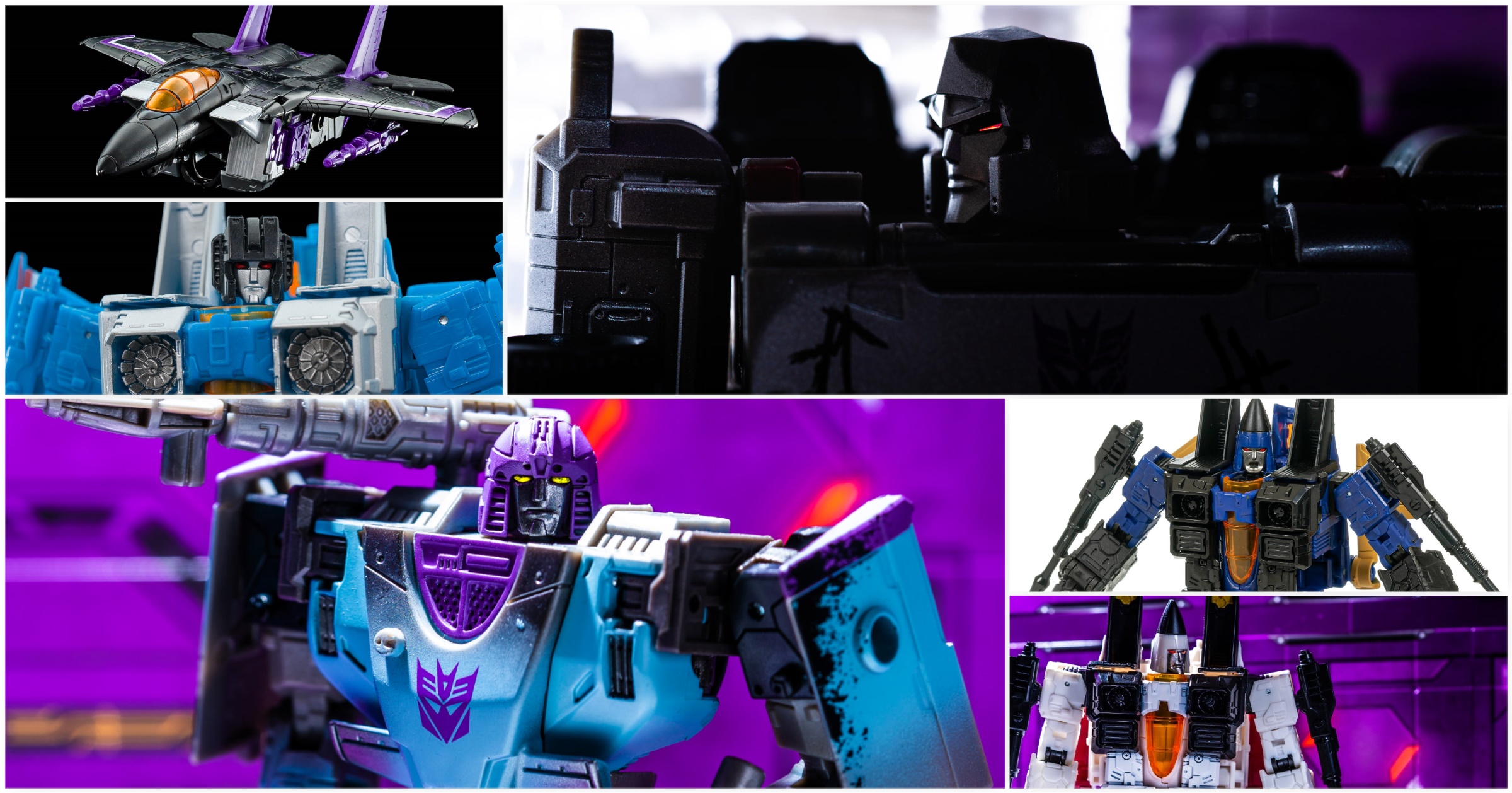 Time for some quick catch up galleries in a TFW2005 Photo Bomb! None of these are hot off the presses but we still like running figures for some old fashion still photos. This round is Seeker heavy with shots for the Target exclusive Skywarp and Thundercracker set, the Amazon Ramjet and Dirge set. Where are you Thrust?! I have a Prime grill with your name on it. In addition, the Netflix figures I ordered online back in February finally showed up after seeing them in person about 12 times so I ran Megatron and Mirage. Megatron is really sharp in person. Least favorite mold of Siege, and somehow I have 3 versions of him. And lastly, we have uploaded overview sets for the Fext Hobby Sci-Fi 04 and 05 Dioramas. These are modular dios that can be configured in different ways, using a brick style peg system. They come in many flavors, but the ones featured here look like purple and orange metal, go figure :).

Hit the individual links below for detailed pics of each. Or, read on to check out some featured shots!

END_OF_DOCUMENT_TOKEN_TO_BE_REPLACED 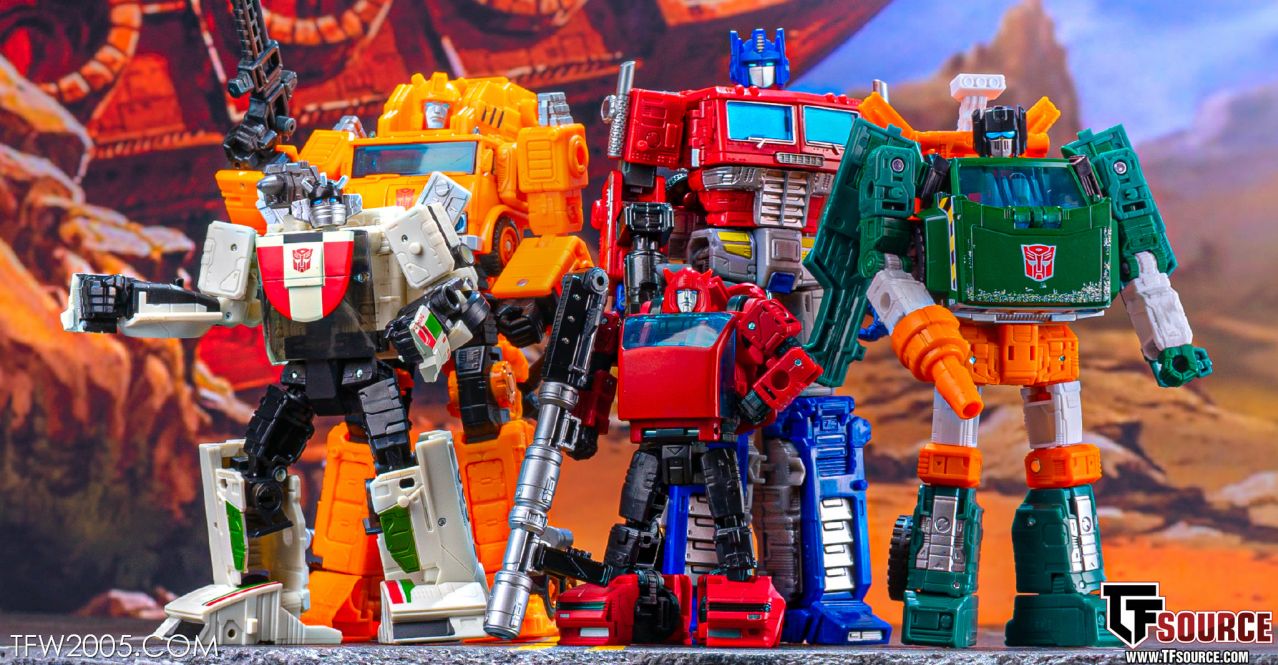 Today we have a big update for our gallery selection – 7 figures get dropped all in one shot!  We have the next rounds of Transformers War for Cybertron Earthrise figures – Leader Class Optimus Prime along with Deluxe Cliffjumper, Hoist and Wheeljack.  In addition to those, we also have some Siege stragglers which we are just now getting up – Apeface and the Ratbat / Rumble 2 pack (shout to Bulkhead!).

Earthrise continues to impress – the Prime is a work of art and is pretty much a baby Masterpiece.  Looks faithful and good in both modes with minimal gaps and kibble.  A little more paint or high quality finish would be nice but for 1/10th the price of MP44 you can’t complain.  Wheeljack also has some MP engineering inspiration and along with Cliffjumper, Grapple and Hoist, it is a VERY OG G1 looking bunch.

Apeface falls outside my normal focus of Season 1 and 2 cartoon characters.  But I had him as a kid and couldn’t resist going nostalgic for a bit.  He gets the job done but I still dig the OG jet mode a bit more.  Ratbat and Rumble are required pick ups for Communications fans of either faction.  It took me a bit to track them down but they are here hanging with Soundwave now.

All in all, Earthrise continues the Siege DNA of great toys and tight nostalgia while Siege still has some gems to hunt down if you haven’t yet.

Read on to check out all 7 figures below in our gallery system, 180 shots total.  These come courtesy of TFSource – depending on what you are looking for they have some in stock.  Grab your preorders for the next waves so you don’t miss out, some heat coming later this year (hopefully)!

END_OF_DOCUMENT_TOKEN_TO_BE_REPLACED 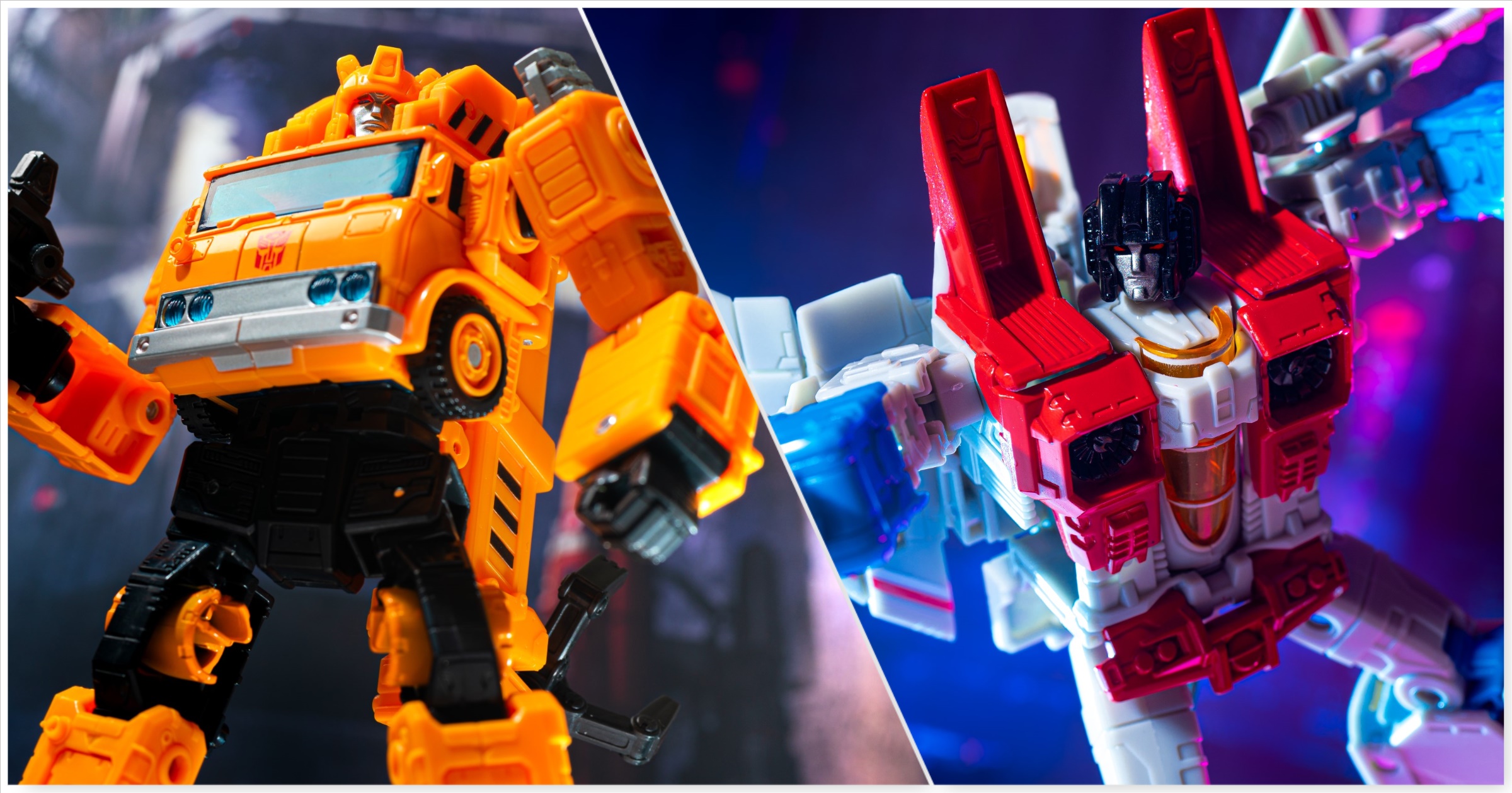 Transformers War for Cybertron: Earthrise is continuing the fantastic DNA of last year’s Siege line on the Transformers Generations front, and today we kick off galleries for it!  We are starting off with the recently released Starscream and Grapple – both are Voyager scale figures with Earth based vehicle modes.  Transformations are slightly complex without the need for a cup of coffee and a tech support call.  Starscream’s vehicle mode is tight, very faithful to the original toy with no major gaps on the top of the jet.  Grapple feels like a mini Masterpiece, like they started with MP Grapple and simplified it down.  He’s faithful in both modes and fun to play around with, even comes with a claw accessory to move that rubble around after battle.

These are out now, with many other wave 1 figs showing up State side after a slew of trickle releases going back to last year.   Last year was my first dip back into Generations in a long while, and I plan to dig into Earthrise again this year so stay tuned as more hit the wire!

Check out our galleries below. Check TFSource for your preorders because these things are moving fast!