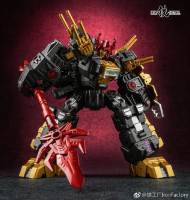 Iron Factory has updated their weibo with pictures of their upcoming IF-EX18D Lord Scorpion (Dark Matter Version). This figure is an homage to Black Zarak. The Dark Matter Lord Scorpion is a remold of their Lord Scorpion (Comic Version) that was released last year. This release has a new headsculpt along with a new weapon.  The figure is due out in May and can be found at most of our sponsors.

Will he be part of your pocket scale Transformers figures? Join the discussion after the jump.