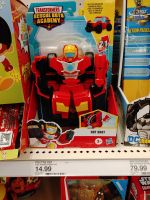 2005 Boards member Hotconvoy is giving us the heads up that the new Transformers Rescue Bots Academy Hot Shot has been spotted At US Retail.

We had seen our first stock images of this figure while back in 2019, and now the figure was found at Target in Grand Junction, Colorado for $14.99. A good price for this 11-inch toy. 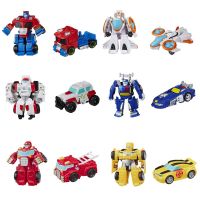 Via Entertainment Earth we can share for you new Transformers Rescue Bots Academy New Listings for 2020.

Additionally, we also have a listing for the Transformers Robot Heroes Academy Featured Wave 3 ($15.00). Scheduled for February 2020. No images yet.

The Rescue Bots Academy line is still bringing fun for young fans. Click on the bar and let us know your impressions on the 2005 Boards! 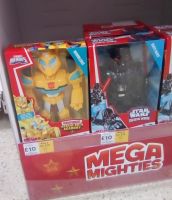 2005 Boards member Underlord is giving us the heads up that the Transformers: Mega Mighties Rescue Bots Bumblebee has beeb spotted At UK Retail.

Mega Mighties Bumblebee is cute super-deformed, non-transforming action figure with limited articulation (similar to the Titan Heroes/Guardians toyline) aimed to small kids. It was found at Tesco, Clacton on sea for £10 ($12.88), or two for £15. His wave partner Hot Shot should surface soon.

The new Rescue Bots series is starting on Thursday, November 14th at 7:00 am, on channel 9-Go. It can usually be found on 93 or 99 on the TV in the capital cities in Australia. There will be two episodes on each day. 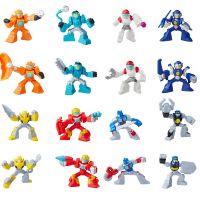 Via UK Hamleys toystore we can share for you our first stock images of the new Rescue Bots Mini-figures Blind Bags Wave 2.

These blind bags bring you small figurines of Rescue Bots characters like: Wedge, Hotshot, Medix, Whirl, Hoist, Optimus Prime, Bumblebee and Chase. Similar to the Rescue Bots Blind Bags Wave 1, each character has 2 different figurines for a total of 16 bots. Bumblebees, Optimus and Chase molds are redecos of Wave 1 while the rest are new molds and characters.

Check out the images after the jump and let us know your impressions on the 2005 Boards! 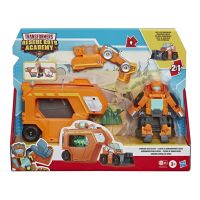 Thanks to 2005 Boards member TFtoycollector for sharing in our Boards images of the new Transformers Rescue Bots Academy Command Centre Hoist And Wedge.

The Hoist and Wedge images surfaced via Smyths UK website. These are simple and fun 1-step toys that include  a 2-in-1 mobile trailer that opens up to become a command centre playset. Kids can attach the included light-up rescue tool to the figure or trailer. Both toys are listed for £19.99 ($25.53) but there’s still no information on the release date.

Nice and fun toys for young Rescue Bots fans! Check out the images on this news post and then share your impressions on the 2005 Boards!

The newly updated episode count is listed as 62 X 11.

This particular pattern is identical to how we learned of the RID 2015’s episode count and the TV event.

We currently do not know if the show will move past Season 3 and the only way to know is to wait for the 2021 list.

Update: As revealed at the end of last year, Rescue Bots Academy receives 52 more episodes on Season 2 for a total of 104.

For those who are interested, the new list showcases the upcoming Micronauts animated series with a brand new image from the show.

Kids animation, 26×22 minutes. A team of alien space explorers come to earth in pursuit of Baron Karza, but in our world they are the size of action figures.

Allspark Studios will pitch the new list to broadcasters worldwide, at the MIPJunior Convention on October 12th, 2019. 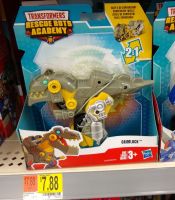 Thanks to 2005 Boards member zobovor has shared in our boards our first sighting of the new Transformers Rescue Bots Academy Grimlock (Motorcycle) At US Retail.

Our first images of this new Grimlock toy surfaced back in May and now it was found at Walmart in Riverdale, Utah for affordable $7.88. Grimlock is now a cute mechanical Tyrannosaurus that can transform into an adorable small motorcycle in only 2 steps. What else can you ask for? 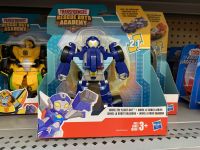 Thanks to 2005 Boards member Rookbartley for giving us the heads up that the new Rescue Bots Academy Whirl The Flight-Bot (Car Mode) has been spotted At US Retail.

We had seen our first stock images of this figure while back in August. This is a curious case since Whirl transforms into a car and not into her original helicopter mode. Not so flight-bot this time. She seems to be a remold and redeco of Race-car Heatwave. She’s similar in size to the previous Rescan Rescue Bots toys.

Whirl was found at Walmart in Fort Wayne, Indiana for only $7.88. A great gift for young Rescue Bots fans. 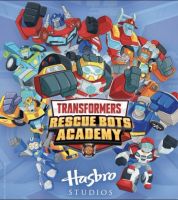 Rescue Bots Academy season 1 (currently 26 episodes aired) is coming back on Saturday 7th, September! Mark you calendars and get ready to roll to the rescue with more Rescue Bots episodes.