• My Little Pony: Friendship is Magic #88

We are sorry to miss everyone at WonderCon this year, but are wishing everyone health and safety at this time. We are still excited to connect with fans and offer great comics from our creators in our WonderCon Exclusive web store. We’re happy to present these special offers and hope you enjoy these comics. We look forward to seeing you at WonderCon in 2021!

Check out the cover artwork attached to this post, then sound off on the 2005 boards!

END_OF_DOCUMENT_TOKEN_TO_BE_REPLACED

In this week’s installment of The Barber’s Shop, IDW Publishing Editor-in-Chief and Author John Barber talks about the creative team working on and ideas built into the Transformers vs. The Terminator series.

Play the clip below, stay tuned for future episodes then sound off on the 2005 boards!

END_OF_DOCUMENT_TOKEN_TO_BE_REPLACED 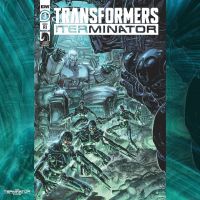 Recently announced distribution changes do not diminish appreciation of comic art on these pages so we are pleased to share with you another retailer incentive cover from artist Freddie Williams II, this one for the the third issue of Transformers vs. The Terminator as revealed by The Terminator Fans.

Check out the attached artwork, then sound off on the 2005 boards!

END_OF_DOCUMENT_TOKEN_TO_BE_REPLACED

On deck arrivals include a 100-page Giant Transformers ’84: Legends and Rumors, Transformers (2019) #22, Transformers ‘84: Secrets and Lies #3, Transformers: Galaxies starting its long-awaited Ultra Magnus arc with issue #10 and Transformers vs. The Terminator concluding its mini-series run.

Check out all the details and cover artwork attached to this post, then join in the discussion on the 2005 boards!

END_OF_DOCUMENT_TOKEN_TO_BE_REPLACED

Now is the time to feast your optics upon a 4-page preview of Transformers vs. The Terminator issue #1 via SYFY WIRE, featuring line art by IDW artist & TFW2005 member Alex Milne plus commentary by Editor in Chief John Barber and Editor David Mariotte.

“The Terminator is at its core a story about a freedom fighter from Earth’s future coming back in time to prevent evil robot beings from wiping out his kind and taking over the planet,” Mariotte explains to SYFY WIRE. “Transformers is about good and evil robotic beings battling for what they believe. So when you put them together like John, co-plotter and editor Tom Waltz, and I did, we ended up with a story about a T-800 traveling back to wipe out the Cybertronians before they can jeopardize his future.”

Remember to check out our reveals of additional variant covers for this issue by Francesco Francavilla and John Giang, then sound off on the 2005 boards!

END_OF_DOCUMENT_TOKEN_TO_BE_REPLACED

Joining the storm of excellence which you already know is incoming for this month’s first Transformers vs. The Terminator issue are the B cover, accompanying line art and pencils by artist & TFW2005 member Alex Milne.

Check out the attached artwork, then share your thoughts about it on the 2005 boards!

END_OF_DOCUMENT_TOKEN_TO_BE_REPLACED

PREVIEWSworld released another update to our May 2020 solicitations coverage, by way of the Andrew Griffith B cover for the third issue of the Transformers vs. The Terminator series.

The T-800’s mission is simple: Exterminate the Cybertronians and ensure the future belongs to SKYNET. When Optimus Prime offers his aid, suggesting they go after Megatron together, the T-800 faces his toughest decision yet. Is the enemy of his enemy his friend, or just another threat to the mission?

This issue becomes self-aware on your May 27th pull list. Check out the attached artwork, then share your thoughts about it on the 2005 boards!

END_OF_DOCUMENT_TOKEN_TO_BE_REPLACED

Highlights awaiting pride of place on your future pull lists include: Transformers 84: Secrets and Lies #2, Transformers (2019) #21, Galaxies continuing its Arcee, Greenlight and Gauge arc in issue #9, the third installment of Transformers vs. The Terminator and the entire four issue My Little Pony / Transformers Friendship in Disguise! mini-series.

Check out all the cover artwork attached to this post, then join in the discussion on the 2005 boards!

When Queen Chrysalis casts a spell looking for more changelings, she accidentally interferes with a malfunctioning Spacebridge! What’s this mean for our favorite fillies? There are suddenly a bunch of Autobots and Decepticons in Equestria! And as the dust settles, Rarity and Arcee find themselves teaming up against a hostile Decepticon force…

It’s Spike and Grimlock’s time to shine as they take on the Constructicons! Meanwhile, Pinkie Pie is determined to share as much knowledge about Equestrian and Cybertronian cuisine as possible with her new friends… which is why she invites Gauge to her kitchen for a live baking show! But things get a bit too spicy when Shockwave shows up.

When Fluttershy and Discord’s tea time is interrupted by Soundwave, it’s robot logic vs. whimsical chaos! And Rainbow Dash, sure that she can fly faster than any Autobot can drive, finds herself in a race with the one and only Windblade—let’s just hope the Decepticons don’t make things too dangerous.

*Retailer incentives:
Order 10 copies and get one free variant cover by Priscilla Tramontano!

When the Insecticons descend upon Sweet Apple Acres and begin devouring the Apple family’s crop, it’s up to Apple Jack and her family to rally to save the farm! Meanwhile, Optimus Prime and Twilight Sparkle finally band together the ponies and the Autobots to get things back to normal. The finale you’ve been waiting for is here!

*Retailer incentives:
Order 10 copies and get one free variant cover by Sara Pitre-Durocher!

The time has come for the Autobots’ Ark to launch—their goal: to save Cybertron from an imminent asteroid belt and the maniacal mayhem of Megatron. The Decepticon warship, the Nemesis, falls into the Autobot trap, following the heroes into the void. But… when the Ark crashed to Earth, the Nemesis did not. What skeleton crew remained and what was their business on the strange alien world below? A gripping new tale about the secret history of the original Transformers comic universe, by the fantastic team of Simon Furman, Guido Guidi, and John-Paul Bove!

*Retailer incentives:
Order 10 copies and get one free variant cover by Nick Roche!

“Rise of the Decepticons” continues! There are certain members of the Rise that if captured by Security Operations, would be bad news for both sides. When a convoy of them are being moved from one secret base to another, the only thing that could set them off track is a massive groundquake… which means the geologic survey team looking into Cybertron’s recent seismic events is about to be outgunned and outmatched.

*Retailer incentives:
Order 10 copies and get one free variant cover by Philip Murphy!

“Gauging the Truth,” Part Three! The Reversionists have a plan, a way to bring their world closer to purity and Primus. Arcee and Greenlight have a plan, to save the world from the Reversionist plan since it seems pretty drastic. Gauge has a decision to make: which side does she help?

*Retailer incentives:
Order 10 copies and get one free variant cover by Kei Zama!

The T-800’s mission is simple: Exterminate the Cybertronians and ensure the future belongs to SKYNET. When Optimus Prime offers his aid, suggesting they go after Megatron together, the T-800 faces his toughest decision yet. Is the enemy of his enemy his friend, or just another threat to the mission?

END_OF_DOCUMENT_TOKEN_TO_BE_REPLACED

Joining the first issue cover parade for the upcoming Transformers vs. The Terminator series is artist John Giang with a Comic Kingdom of Canada exclusive which is now available for pre-order through both CK and Slabbed Heroes.

Size up the attached artwork, then sound off on the 2005 boards!

END_OF_DOCUMENT_TOKEN_TO_BE_REPLACED 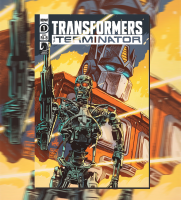 We join IDW artist Francesco Francavilla in sharing his retailer incentive cover B for the Transformers vs. The Terminator series’ issue #1 which is due next month.

It’s Skynet vs. Cybertron in a crossover for the ages! 1984: When a deadly race of machines emerge from another time, will a robotic guardian be able to protect the Earth from a dire future… or will the T-800 fail in his mission to prevent the world from becoming a plaything to the Decepticons?

Check out the attached artwork, then share your thoughts about it on the 2005 boards!