With the next arcs in both Transformers and Galaxies on deck, TFW2005 member Lucas35 alerts us to the Amazon pre-order of selected issues in book form as The Change In Their Nature, Volume 2:

Orion Pax, Chromia, and Security Operations have almost cracked the case of the Rise terrorists who killed Brainstorm and Rubble. But they aren’t the only ones worried about the Rise and with a bolder Ascenticon faction behind them, Megatron, Starscream, and Soundwave seek to save Cybertron from all threats–the Rise, the Nominus Edict, and the Autobots! Meanwhile, in Cybertron’s colonies, other bots find themselves dealing with the fallout of the rising tensions on Cybertron as they seek new avenues of Energon… and a way home. Collects Transformers #13-18 and Transformers: Galaxies #1-6!

Remember to place Volume 1 on your pre-order list as well, then join in the discussion on the 2005 boards! 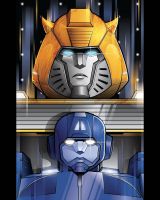 If you missed out on single issues of the first twelve entries in the Transformers series or want to revisit them in book form, IDW Manager, Creative Development / Senior Editor Tom Waltz and artist Cryssy Cheung have got you covered with The World in Your Eyes, Volume One.

The precise availability of this publication is to be determined, with Cheung indicating next week, the “coming soon” IDW listing also pointing to this month, Previews World showing “Advance solicited for October release!” and Amazon pre-order dates ranging from November 2019 to January 2020.

Check out the artwork attached to this post, then sound off on the 2005 boards!

Get ready to add these issues to your future pull lists, then sound off on the 2005 boards!

Share your thoughts about this series and the attached artwork on the 2005 boards!

The hunt is on! Chromia and Prowl launch a massive security operation, desperately trying to track down two murderers. Bumblebee visits an injured Windblade, Orion Pax, Sentinel Prime, and Megatron wrestle for control and influence-and nobody knows whose side (if anyone’s) Termagax and Starscream are on in all of this!

Put this issue on your October 16th pull list, then sound off on the 2005 boards! 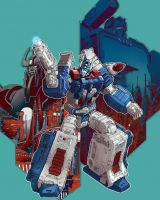 The June 2020 arc of the monthly Transformers spin-off series Transformers: Galaxies will turn the focus to Ultra Magnus, courtesy of social media posts by the creative team of author Brandon Easton and artist Andrew Griffith with colors credited to Teiowí:sonte Thomas Deer.

Check out the attached artwork fresh from IDW’s New York Comic Con 2019 panel, then join in the discussion on the 2005 boards!

The Haslab Unicron Website has updated a new exclusive bonus for their loyal supporters.

HasLab Unicron backers through HasbroPulse.com will now receive an EXCLUSIVE digital comic bundle, made in partnership with IDW Publishing and available only through ComiXology.

This release has a new special cover by artist Andrew Griffith. A great homage to the iconic Marvel Transformers #01 comic featuring Unicron, Cyclonus, Hot Rod, Spike, Daniel and one not-so-lucky Galvatron. You can treat your optics with the mirrored cover after the jump.

We are just a few days left for the Unicron crowdfunding to end. You can still support Unicron here and then share your impressions on the 2005 Boards!

END_OF_DOCUMENT_TOKEN_TO_BE_REPLACED

IDW artists Nick Roche and Luis Antonio Delgado dropped a real treat for the Ghosts of Cybertron conclusion, with two great looks at cover B plus a panel preview:

The day has come, the final issue of Ghosts of Cybertron debuts this Wednesday and everyone at IDW is excited for the world to see it! Optimus Prime with his proton ax vs a Megatron ghost! This happens every not once in a life time!

Enjoy the attached artwork and then sound off on the 2005 boards!

Artist Casey W. Coller has shared, via his Instagram and Twitter accounts, the amazing lineart of his Transformers Galaxies Retailer Incentive Cover B.

The Transformers Galaxies issue #01 is already out at comic stores, bringing us the Constructicon’s background story for the new IDW’s Transformers continuity. Casey Coller treats us with the lineart of his art featuring the Constructicons gang with Devastator. To top it all, Casey has also shared the clean version of this cover with colors by Josh Burcham.

Click on the bar to see the mirrored covers and then share your impressions on the 2005 Boards! 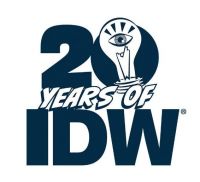 IDW Publishing’s New York Comic Con 2019 schedule is posted, and we’ve reviewed it to give you a sneak peek of several Transformers-related items:

Revealing behind-the-scenes secrets of your favorite IDW comics—Locke and Key, Teenage Mutant Ninja Turtles, Transformers, Sonic the Hedgehog, and more! Be the first to know about upcoming projects by the most exciting creators around! Ask the questions you’d only dreamed of asking to Editor-In-Chief John Barber and a host of fan-favorite writers and artists—plus some who soon will be!

Only available for pick-up at IDW’s NYCC booth #1844 throughout the convention!

Are you attending the convention? Check out the entire press release here then stay tuned for more New York Comic Con news on the 2005 boards!