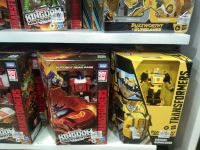 It’s time for our usual Transformers international sightings round up, courtesy of TFW2005 members all over the world. This week new Buzzworthy Bumblebee toys hits Australian shelves, the recently revealed Cyberverse Ultra Class Ramjet showed up in Chile, Transfomers Prime reissues spotted in Ireland, the exclusive Covert Agent Ravage 2-pack is out in France and collectors in Philippines have got a rain of new Kingdom, Studio Series and Buzzworthy Bumblebee toys in stores with even some US exclusives. 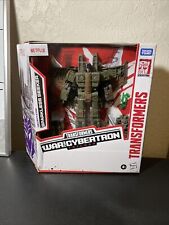 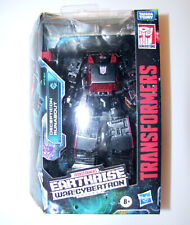 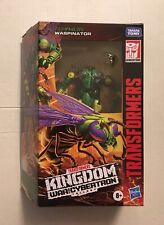 Blackarachnia has made her way to the Maximal ship, the Axalon, and encountered her first Maximal, Cheetor. The iTunes Apple Books 3-page preview of Beast Wars issue #8 reveals more about this close Energon encounter, so check it out after the jump then sound off with fellow readers on the 2005 boards!

END_OF_DOCUMENT_TOKEN_TO_BE_REPLACED 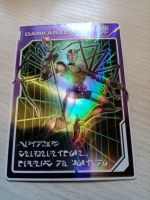 Thanks to 2005 Boards member LordZero, we can share for your our first look a the new Transformers Kingdom Darkarachnia Card.

This new card came with the Kingdom Waspinator figure which was recently spotted in Chile (together with Shadow Panther). Darkarachnia looks similar to the regular Blackarachnia design but she’s holding a long scepter.  The card also shows a Cybertronian message which translates as:

“Becomes Darkarachnia.. herald of Unicron”
This is pretty similar to the Dinomus card we had previously reported which showed Dinobot turned as a herald of Unicron. See the mirrored image of this new card on this news post and then sound off on the 2005 Boards! 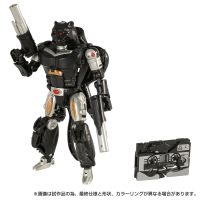 This is the official Japanese release of the Pulse exclusive War for Cybertron Deluxe Covert Agent Rave and Micromaster Decepticons Forever Ravage 2-pack which consists of a War For Cybertron Agent Ravage (Beast Wars inspired, an extensive Kingdom Cheetor retool) and a re-issue of G1 Ravage.

See all the mirrored stock images on this news post and then sound off on the 2005 Boards!

Courtesy of Transformers Chile Facebook Group we have our first look a the packaging of the upcoming Transformers Kingdom Deluxe Shadow Panther & Waspinator.

These figures (part of Kingdom Wave 4 Deluxe) showed up out of nowhere at Irion Toystore, a single Toystore at Santiacho, Chile. Both figures feature a nice packaging art of each character and both boxes keep the recent Kingdom style. Also, 2005 Boards member LordZero shared additional information about this sighting. Irion Toystore receives stock directly from Hasbro Chile, so these two figures just dropped without being officially revealed. Each figure is priced $33.37.

Update: Thanks to 2005 Board member Lapin for confirming that the case of Kingdom figures at Irion Toystore only contains Waspinator, Shadow Panther, Paleotrex and Tracks. No more new figures.

See all the mirrored images, including some in-hand images of the toys, after the jump and then sound off on the 2005 Boards!

END_OF_DOCUMENT_TOKEN_TO_BE_REPLACED

It’s time for our usual Transformers international sightings round up, courtesy of TFW2005 members all over the world. New Zealand fans can now pre-order the HasLab Victory Saber 2-pack, the latest Kingdom figures including the Ark have been released in Peru together with new Cyberverse Warrior toys, more Buzzworthy Bumblebee and Cyberverse toys are found in Russia, and stores in Singapore have got the Buzzworhty Bumblebee Power Charge Bumblebee.

Thanks to several reports from our 2005 Board UK residents we can confirm that the new Transformers Kingdom Autobot Ark, Commander Rodimus Prime and Wave 3 Voyager & Deluxe are finally out in the UK.

We have several sightings at different Smyths stores in the UK which now have Kingdom The Ark, Rodimus Prime, Rhinox, Scorponok, Tracks, Wingfinger and Arcee (ER repack) on shelves.

Happy hunting one and all!

Looks like this Beast Wars #10 cover has been revealed. Art by the Coller/Bove connection! @wordmongerer

I love Beast Wars and have seriously enjoyed the covers I’ve gotten to work on for this series. Really enjoyed using a different style to render this and always love any chance to work with my brother @CaseyWColler

Share your thoughts about the artwork for this upcoming issue by joining the November solicitiations discussion on the 2005 boards!

END_OF_DOCUMENT_TOKEN_TO_BE_REPLACED

Is a visit to Personal Diagnostics and Restoration necessary? Whose side is Blackarachnia on? Discover answers to these questions and more as the The “Pod” arc begins in the 5-page preview of Beast Wars issue #7, then sound off with fellow readers on the 2005 boards!

END_OF_DOCUMENT_TOKEN_TO_BE_REPLACED 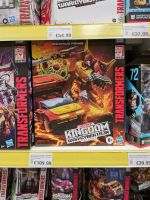 It’s time for our usual Transformers international sightings round up, courtesy of TFW2005 members all over the world. We have quite an active week this time. New Buzzworthy toy have showed up in Australia, Beast Wars reissues, Kingdom T-Wrecks and Rodimus have been spotted in Ireland, new Kingdom and Studio Series toys in Italy, Studio Series and Generations Selects Transmutate in Peru, new officially licensed merchandise in Russia, and to top it all, the highly anticipated Generations Selects Artfire & Nightstick has been found in Singapore.