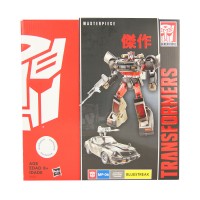 Hasbro Australia has added the Hasbro Masterpiece Bluestreak to their website, and with it, some official images of the release including a look at the box. The box is the now-standard “large” Hasbro boxes, which suggests Bluestreak will be packaged in robot mode and there may be some “dead space” around the edge of the figure.

(For those keeping track, Masterpiece Star Saber has also gone up for order. However, his box is the same as the Japanese release one, since he is being imported from that region for the Australian market.) 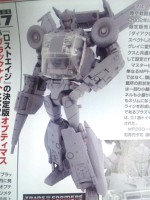 Via Taghobby, Masterpiece MP-26 has been revealed as Road Rage, a remold of the upcoming MP-25 Tracks. Giving us out first ever female Masterpiece, she looks to have a different head sculpt, but no word on what other differences this mold has as compared to MP-25.

I’m sure the specifics of Road Rage’s release date will be coming shortly, as well as any other accessories that will be included with the figure. TFW2005 will keep you updated as new info comes out! For now, sound off after the jump! 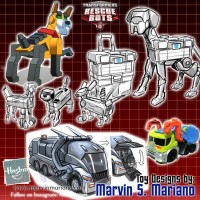 Marvin Mariano has posted the concept art for Salvage, Blurr & Servo to the Transformers Rescue Bots Facebook page. This artwork shows some of the early concepts for the characters as they were initially imagined alongside the finished designs. Check them out!

Great news for fans that have purchased the Metallic verision of Gigapower Guttur according to their Facebook page he is shipping to your favorite retailers in a matter of days. The chrome is still a work in progress due to some mold changes. This is Giga’s first 3rd party release and going by some of the video reviews of their pre-production sample they have done a great job video links below.
Vangelus
Benscollectables
Thew Adams

If you have not placed your order this massive Dino here are some retailer links.

It looks like WB-01E Fierce Attack “Onslaught” the final figure in Warbotron’s WB-01 “Bruticus” combiner will be getting it’s release soon due to several members on the Weibo site posting pictures of the figure in their hands. The members WHEEL_JAEHEE, Blood Messiah & Micky_hEr晔 have also posted pictures of WB-01F X-ray Warbotron’s “Shockwave Kit” that comes with additional weapons for all five combaticons plus a small transformable Shockwave figure. It looks like some assembly will be required for said figure, also it’s not clear on how to get this extra “Shockwave Kit” yet but you can put your order in for WB-01E at your favorite retailer with the links below.

There is a ton of pictures after the break so please take a look it took some time to gather these all together.

The fourth figure in Warbotron WB01 lineup will be hitting your favorite online retailers possible this week. These boxed images come from Toyzone’s Weibo page. Whirlwind (Vortex) will have some replacement parts for Warbotron Airburst (Blastoff) figure. There are some more pictures after the break, also some TFW members already have the figure in hand so check out the thread with the link below to see some more photos. END_OF_DOCUMENT_TOKEN_TO_BE_REPLACED

Following the news of the Combiner Wars Voyager figures being found at retail in Canada it looks like Deluxe & Legends are out now too. Cybertron.CA member Echotransformer found them at a Toys R Us store in Ottawa. END_OF_DOCUMENT_TOKEN_TO_BE_REPLACED

Amazon has a listing for Transformers: Drift – Empire of Stone with an expected release date of June 16, 2015.

This volume collects the four issue miniseries penned by Shane Mccarthy, creator of Drift, and will feature bonus content like interviews, an art gallery, and other behind the scenes info. END_OF_DOCUMENT_TOKEN_TO_BE_REPLACED 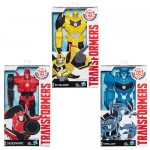 Entertainment Earth has posted a picture of the RID Wave two Titan Heroes releasing in February that has Sideswipe in his box. Each 12-inch figure has moving limbs and is ready for big action. END_OF_DOCUMENT_TOKEN_TO_BE_REPLACED

It looks like Warbotron’s first figure in their WB-03 Computron combiner series Turbor Ejector or Afterburner will be releasing soon thanks to these new pictures of the figure in it’s box. The pictures were posted on Toyzone Weibo page. The discussion link below will take you to the post the pictures were posted. END_OF_DOCUMENT_TOKEN_TO_BE_REPLACED