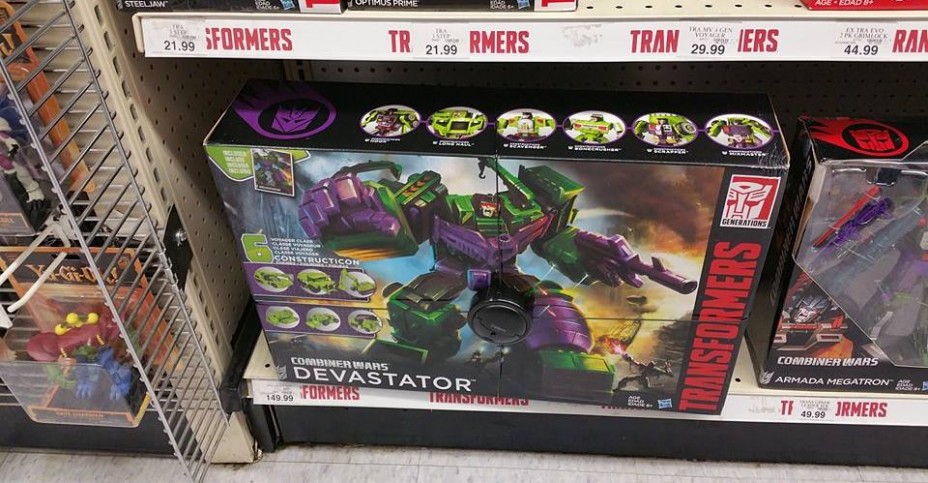 Run for the hills, protect your children, prepare for a rampaging fandom as they run to stores.  Combiner Wars Devastator has been sighted at a Toys ‘R Us store in Sunnyvale, California.  Devastator can devastate your home for the wallet-emptying price of $149.99.

Just in time for Christmas, Wave 3 of the Transformers: Age of Extinction Power Battlers has been release in the United States. Power Battlers The wave has been sighted at the CityTarget in downtown Chicago, IL. New figures in Wave 3 include Galvatron, Grimlock, Lockdown, Slug, and Snarl. All but Slug was found during this sighting. END_OF_DOCUMENT_TOKEN_TO_BE_REPLACED

2005 Boards member D-Drive has sent us the Diamond Comics shipping list for next Wednesday, September 18th. Shipping will be:

TRANSFORMERS REGENERATION ONE #0
(W) Simon Furman (A) Jeff Anderson & Various (CA) Andrew Wildman, Guido Guidi
ZERO POINT! Adventure in the time stream, as HOT ROD desperately attempts to identify the rogue elements that are leading him, and the entire CYBERTRONIAN race, inexorably towards the catastrophic end of time itself. What hidden stories do the DEATHBRINGER, BOLTAX, BUSTER WITWICKY, and GALVATRON have to tell, and what-if any-solutions are there? Or is it already too late?
Ships with 2 covers in a 1-to-1 ratio, 1 by Andrew Wildman and 1 by Guido Guidi. Also shipping 1-in-10 variant and Giant Robot Comics TRANSFORMERS REGENERATION ONE #0 exclusive cover.

TRANSFORMERS ROBOTS IN DISGUISE TP, VOLUME 4
(W) John Barber (A/CA) Andrew Griffith
Megatron’s back… and CYBERTRON will never be the same. Everything BUMBLEBEE and his AUTOBOTS have built teeters at the edge of collapse-and STARSCREAM has to make the choice his whole life has been leading to. And meet the new PROWL-deadlier than ever, colder then any other AUTOBOT, and ready to end the DECEPTICON threat.

Phil Jimenez, one of the artists of the upcoming Transformers cross-over vent – Dark Cybertron, conducted an interview with Previews World. Within the interview, Phil talks about how he came about this job, the style and development of the artwork, and how his working relationship is with the other artists on the series. Additionally, the interview contains several clear preview pages from Dark Cybertron!

Be warned that these images do contain some minor spoilers regarding a recent event in IDW’s Transformers storylines. END_OF_DOCUMENT_TOKEN_TO_BE_REPLACED

2005 Boards member D-Drive has sent us the Diamond Comics shipping list for next Wednesday, September 11th. Shipping will be final issue of the Monstrosity print collection, featuring the final three issues of the originally-online comic.

TRANSFORMERS MONSTROSITY #4 (OF 4)
(W) Chris Metzen, Flint Dille (A/CA) Livio Ramondelli
THE RETURN! In the early days of the war on CYBERTROIN… MEGATRON’s journey into the abyss is over. OPTIMUS PRIME’s grip on the planet is slipping. GRIMLOCK and the DINOBOTS hold onto sanity by a thread. Now, all the threads draw together… and the world will shudder.
Ships with 3 covers in a 1-to-1-to-1 ratio, all by Livio Ramondelli. END_OF_DOCUMENT_TOKEN_TO_BE_REPLACED

Zap2It has posted a press release from the Hub Network announcing that the Transformers Prime: Beast Hunters – Predacons Rising movie will air on The Hub Network on October 4th at 8 p.m. ET/5 p.m. PT with an encore at 10:30 p.m. ET/7:30 p.m. PT.

The network airing is four days before the release of the movie on DVD and Blu-Ray.

PLEASE BE WARNED THAT THE LINK ABOVE CONTAINS MAJOR SPOILERS ABOUT THE MOVIE. CLICK AT YOUR OWN RISK END_OF_DOCUMENT_TOKEN_TO_BE_REPLACED

2005 Boards member D-Drive has sent us the Diamond Comics shipping list for next Wednesday, August 14th. Shipping will be the big 30th Anniversary Collection Hardcover as well as the Dark Prelude trade paperback that captures the most recent six Spotlight issues.

TRANSFORMERS 30TH ANNIVERSARY COLLECTION HC
(W) Jim Sorenson (A) Various (CA) Alex Milne
It’s a celebration 30 years in the making! Relive the landmark comics that helped define the legacy of TRANSFORMERS and read along with the creators that made these great comics as Jim Sorenson provides insight from a range of writers and artists that breathed life into the denizens of CYBERTRON. From Marvel to Dreamwave to IDW and other iterations in-between, this book is a must have for TF collectors!