2005 Boards member RATCHET 208 is reporting that Australian retailers have put up pegs for the mainline and gimmick lines of Transformers: Rise of the Beasts toys.

It is likely that toys will be hitting retail very soon. Currently, several listings suggest a February 2023 release window.

February 2023 issue of SFX magazine is out today and we picked up a copy to take a look at an exclusive interview with Alan Tudyk for his role as Optimus Prime on Transformers: EarthSpark.

What goes through your head when you learn that you’re going to be part of such a well-known franchise?

I got an email asking if I wanted to do it. I read it and my brain rejected the idea that I would even be asked to play Optimus Prime. I read it as Prime. I saw Prime and I was like, “Oh, right. There are other Primes.” Because I did [2011 live action film] Transformers: Dark Of The Moon, and there was another Prime [Sentinel]. There was Optimus and then this other guy showed up.

It was like one of the original Primes and so I thought I was like Optometrist Prime or some other, you know, Amazon Prime. I was like, “Cool. I’ll be talking about Transformers. I’ll probably have like two lines an episode and I get to do this cool thing.” It wasn’t until just a few days before I ever had to record that I started working on it and saw that all the lines in the script that were highlighted were Optimus, and I freaked out.

Like, there’s no way! [Laughs] What are you talking about? I’m more like Uncomfortable Prime, I shouldn’t be… That’s usually my characters that I play: Indecision Prime, left or right? We really had a blast, I came in and worked on it, and we had a really good time. The first time I got to say “Autobots, roll out,” I got chills, literally chills. And then they turned up the heat. And then we continued the session.

What’s been your main take-away for your character?

I would say it’s just so much fun. I love this new iteration; there’s areas of grey here because it’s now after the war, and Megatron and Optimus Prime are working together, but it’s not clean-cut. Some of the Decepticons are still fighting this war, so they’ll capture them and it’s like, “Are they your enemies? Are they your friends? You’re all part of the same species. So what is it?” There’s a question there. It’s about looking after ourselves as a species, which is a good message at any time in history, but working together for the common good.

I also took away how cool the animation has become. From when you first watched it to now, this big animation is so cool, it looks really, really good. It’s very entertaining, there’s a lot to it. There’s a story family, a lot of that part of the story, but then there’s also some really great action.

You can read the rest of the interview on SFX Magazine – February 2023. 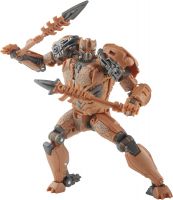 Amazon Australia is giving us our first look (and an official one at that) at Transformers: Rise of the Beasts Studio Series Cheetor.

The listing lacks product information, but we believe that all will be revealed today during Hasbro’s Transformers Tuesday reveal.

END_OF_DOCUMENT_TOKEN_TO_BE_REPLACED 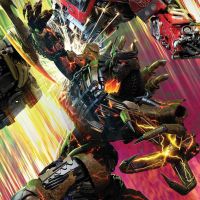 Not too long ago, we reported the news of the novelization of Transformers: Rise of the Beasts aimed at pre-schoolers.

Today, we have the cover art of the two books titled ‘Mission At The Museum‘ and ‘The Search Is On‘.

The cover for Mission At The Museum is also giving us our first look at the Hasbro Control Art of Scourge.

You can check out both covers, after the jump.

We have with us a brand new set of listings for the Transformers: Rise Of The Beasts toyline. While some listings are known before, their Hasbro Codes were previously unknown. 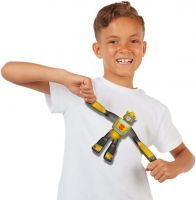 A while back, Character Group received a master license from Hasbro to produce toys based on their Stretch Armstrong brand.

At the end of last year, Bumblebee became the first Transformers character to be a stretchable figure.

The UK company is now planning to expand the Stretch Armstrong Transformers line in 2023  along with Star Wars characters.

The company stated that new products will be on display at this year’s UK Toy Fair. Visitors can take a look at the new rage at stand N16. 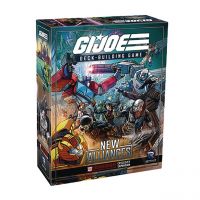 Ahead of Renegadecon Virtual 2023, we now have our first reveal for the year 2023.

G.I. Joe Deck Building game is set to host a new expansion pack featuring a crossover with the Transformers franchise.

The Joes get a visit from an unexpected ally, Bumblebee, who warns that their arch-enemy Cobra has teamed up with their enemy, the Decepticons, and that what they are planning will not bode well for planet Earth or the people who call it home. The forces of Cobra have new allies in their plot to take over the world! Alien robots have landed on Earth and it’s up to G.I. Joe to figure out if they’re friend or foe! In this expansion, the Joe’s will have to team up with the Autobots and investigate the Cobra/Decepticon plot. Take advantage of the Autobots’ different modes to ride into missions or add some cybernetic muscle to your teams! This is an expansion. G.I Joe Deck-Building Game is required to play.”

You can check out additional details (and preorder) from Game Nerdz. 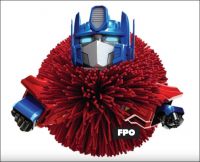 Back in 2020, Hasbro outsourced the engineering and development of its Koosh brand to Playmonster.

Today we received news that the Transformers brand is inducted into the Koosh Balls under their Cameos line.

For the moment, we have Evergreen Optimus Prime and Bumblebee, but it is likely that we will see more in the future.

Buyers can play with Koosh Balls like Yo-Yos or use them for decorating their Christmas tree or use them as a wrecking-ball accessory for ROTF Devastator.

See what new Transformers games are on the horizon!

Following the listings and reveals of the ROTB 2-In-1 Convertible Mask Assortment (Optimus Primal & Bumblebee), we now have the character listing for the Transformers: Rise of the Beasts Basic Roleplay Mask Assortment.