Twitter user Tagoal has just tweeted new screengrabs of a recent broadcast in Japan which revealed Masterpiece Optimus Primal in gorilla mode, for the first time in color! We also see a closeup of the swords and arm guns. In addition, Beast Wars Dinobot makes an appearance…..

Read on to check out the new images! 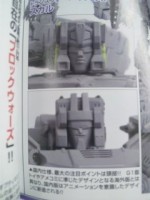 Twitter user gadepon has tweeted scans from a Japanese hobby magazine showing TakaraTomy Titans Return prototypes. These are thought to be planned for release as part of their Transformers Legends line. Shown are Skullcruncher and Hardhead, note the new heads on both, with Hardhead having a full face rather than a faceplate!

Read on to check them out. 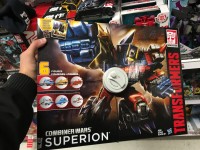 The wait will soon be over for those of you waiting to find the Combiner Wars G2 Superion gift set! Boards member AutobotMirage just found one today at a Toys R Us store in Amherst, New York for $99.99. Happy hunting and don’t forget to post your sightings in our Transformers sightings forums! 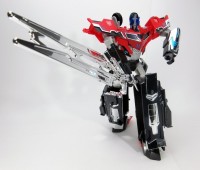 TAV33 Optimus Prime Supreme Mode is due out for release next month and designer Hisashi Yuki has tweeted some new, in-hand images! Also shown is Warrior Class Sideswipe holding that giant sword Supreme Mode Optimus comes with. Read on to check them out!

A new issue of IDW’s Transformers Robots In Disguise comic is due out tomorrow and we’ve got the preview!

Transformers Robots In Disguise #3
BUMBLEBEE’s investigation of a mysterious DECEPTICON’s past uncovers a new lead? but unraveling this mystery may not reveal the answer he wants to hear.

Read on to preview this issue!

DX9 Toys has updated their Facebook page with new images of their D07 Tyrant figure in color! Previously we had only seen test shots sans paint and molded in grey. Shown in this batch of images are the accessories, card and comparisons to other figures including the Takara 2005 G1 Galvatron reissue. Read on to see Tyrant in color!

This set retails for ¥16,200 and is planned for release in February 2016. Read on to check out all the new images!

Perfect Effect has just revealed their upcoming Leonidas repaint on their Facebook page. Named “Xerxes”, it has the teal and black commonly associated with RID Scourge but with a whole lot more red. Read on to check it out!

So if you missed out, next year is your chance to get the biggest Optimus Primal figure ever released and celebrate the Beast Wars 20th Anniversary! Images are from Starscream on Weibo. Read on to check out the images! 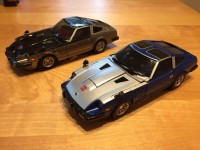 The long awaited MP-18B Bluestreak figure has been released! This figure is a dream come true for fans that have wanted a blue Bluestreak since the G1 days. Read on for in-hand images from Monari & TCracker and check out the MP-18B Bluestreak review thread already in progress!