Courtesy of DM-Toys黑骑士模玩官微 on weibo we have images of the next upcoming figure from Zeta Toys in their ongoing Armageddon (Masterpiece-styled Bruticus) project.

Zeta Toys consists of former ToyWorld designers who are embarking on their first third-party project as a follow-up to ToyWorld’s Constructor (Devastator). The new project – Armageddon – is scaled similarly with an absolutely massive combined mode and Masterpiece-scaled alt and bot modes for the individual figures. We have already seen finalized, full-colored and painted test-shots of their Vortex and Blast Off as well as prototypes of their Brawl and Onslaught.

Jump into the discussion on our boards to weigh in with your thoughts on this newest figure. Are you pleased with this modern take on a classic G1 character or does it offend your sensibilities? Let us know what you think.

Thanks to the impressive detective work of our very own TFW2005 staff member Black Convoy, we have more information about the upcoming re-release of the Transformers 2007 Leader Optimus Prime figure. He was able to track down the first in-package image of Prime courtesy of Tfcn賽博坦新聞台 on Facebook.

According to the packaging, it appears this re-release will be part of a sub-line called “Transformers Tribute” and features new artwork of Optimus Prime as well as a 10th anniversary sticker.

As we previously reported, this figure is based on the original release of Leader Class Optimus Prime from Transformers 2007, but has additional paint apps and extensive chrome work added to really give Prime a premium feel. It does not however feature the remolded weapon or head from the 2007 Premium Optimus Prime.

Does this figure strike a nostalgic chord with you? Did you miss out on this figure the first time around and are thinking about picking up this improved version? Feel free to sound off in the ongoing discussion on the TFW boards.

Update: The same Facebook user has also shared the back of the box.

FansToys is at it again, this time bringing us colored test shot images of their upcoming figure FT-22 Koot, a Masterpiece-styled homage to Kup, everyone’s favorite (or possibly second-favorite) grumpy old soldier.

Koot is scaled to blend seamlessly into your Masterpiece collection and features a high level of articulation, impressively detailed and screen-accurate interchangeable faces, including one that gives him his signature cigar. He can be further customized with optional chest pieces to give your figure either a clear chest that showcases more of the finer details of the sculpt or an opaque chest for more cartoon-accuracy. He even comes with a Targetmaster that can be used in either bot or alt mode to add further playability by providing him with a second weapon for duel-wielding action when paired with his G1 toy-accurate rifle.

Koot is currently available for pre-order from all of the site sponsors. Be sure to secure your pre-order today and add this figure to your Masterpiece collection.

Thanks to 2005 Boards member D-Drive we have a look at what’s dropping next week at your local comic shops.  Check it out below and pick em up next Wednesday!

REVOLUTION is over-but the danger to Earth is just beginning. As OPTIMUS PRIME pulls Earth into the larger universe, he’s painted a target on Earth… and a new alien incursion begins when a corkscrew shaped craft drills into our world! Collects issues #1-6.

(W/A/CA) Art Baltazar
After learning that his favorite comic book character SNAKE EYES is real, BARON KARZA, along with his new ally COBRA COMMANDER, tries to capture him and claim SNAKE EYES as the ultimate collectible! WHAT?! Someone call G.I. JOE! What will happen when the JOES get involved in the battle, you ask? That’s right! A showdown between Snake Eyes and the Ninja STORM SHADOW! But what happens next…would be a SPOILER! Beware BARON KARZA! Or the world will be crushed in his grasps!

Coming as no surprise and just a few days after the reveal of Optimus Prime, Prime 1 Studio has teased on their Facebook page the upcoming release of Transformers: The Last Knight Megatron.

For anyone unfamiliar with Prime 1 Studio, their products are high-end, premium collectible statues that feature finely detailed, screen-accurate sculpts and intricately painted decos with an attention to detail rivaled by no one. These statues bring fans as close to the real thing as possible and could be and rightfully should be considered the absolute apex of collectibles for Transformers Movie fans.

That amount of detail does come at a cost. Expect this statue to set you back a little bit as they typically average anywhere from $1,000 to $2,000 apiece. 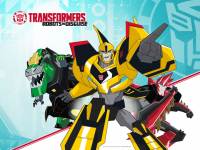 Courtesy of board member SeanTF1967 and his amazing cyber-sleuth skills we have airing dates and episode descriptions for episodes 8-11 of Transformers: Robots In Disguise airing on Cartoon Network. These episodes look to be centered around everyone’s favorite cadet, Strongarm. So if you are fan of her character or just want to catch up on this latest iteration of the Transformers cartoon, you should plan to catch these episodes as they air later next month.

Episode 8: Get a Clue – Strongarm flexes her detective muscles to solve a baffling series of Decepticon thefts. Can she stand up to her teammates in order to bring a perp to justice?

Episode 9: Out of the Shadows – The Bee Team learns about Drift’s past when his former mentor Shadow Raker comes to Earth to recover something Drift has taken from him – Slipstream and Jetstorm!

Episode 10: Disordered Personalities – An experiment in combining accidentally causes the Autobots to swap personalities. Stuck in the wrong bodies, the team is called on a mission to defeat the Stunticons in a road race.

Episode 11: Guilty as Charged – Strongarm worries that her Academy classmate Chicane may still harbor a grudge, but when a powerful foe comes after her old friend, Strongarm an the Bee Team put their sparks on the line to protect her. 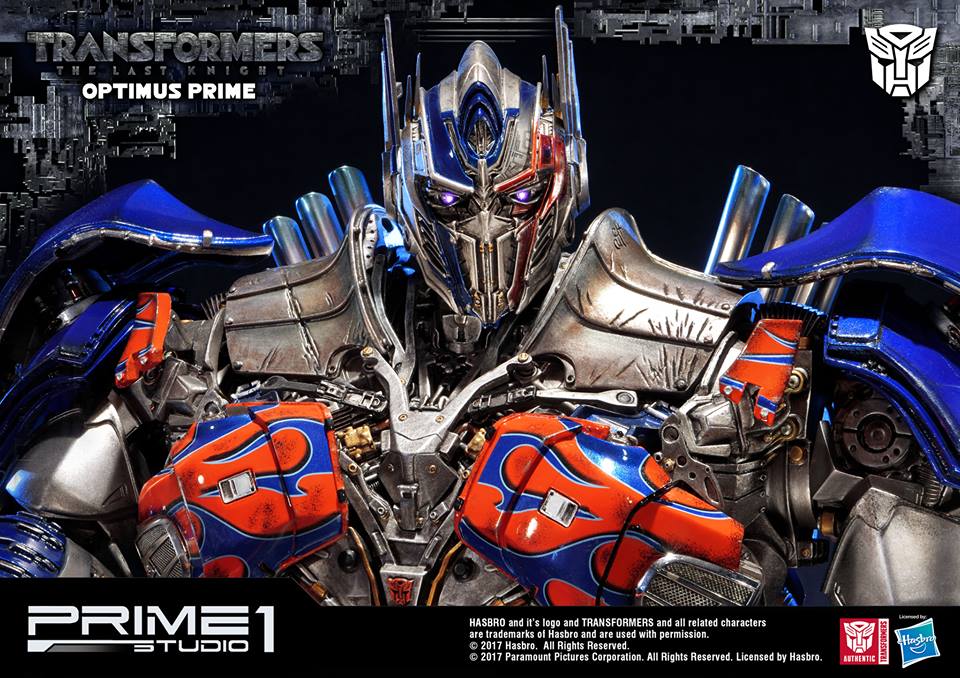 As we have come to expect, Prime 1 Studio continues to astound and impress with their line of high-end, movie-accurate statues. This time around they have announced via their Facebook page an amazingly accurate The Last Knight Optimus Prime, purple-eyes and all.

Prime can be displayed in a number of ways: with his sword slung over his shoulder, or held point-down at his waist, as well as with his shield attached to his forearm or stored on his back. He also comes with the wrist blades that we have seen featured in the preview trailers. The most striking difference to the previous Optimus Prime release is of course the color changes to his eyes and head. This is undeniably the “evil” Optimus Prime that we expect to see in theaters in just a few short weeks.

“For my world to live yours must die.”

Prime 1 Studio is proud to present MMTFM-16: Optimus Prime from The Transformers: The Last Knight. Optimus Prime is the leader of the Autobots, the last Prime. In the absence of Optimus Prime, a war has commenced between the human race and the Transformers. The key to save their world, the future lies buried in the secrets of the past, in the hidden history of Transformers on Earth.

END_OF_DOCUMENT_TOKEN_TO_BE_REPLACED 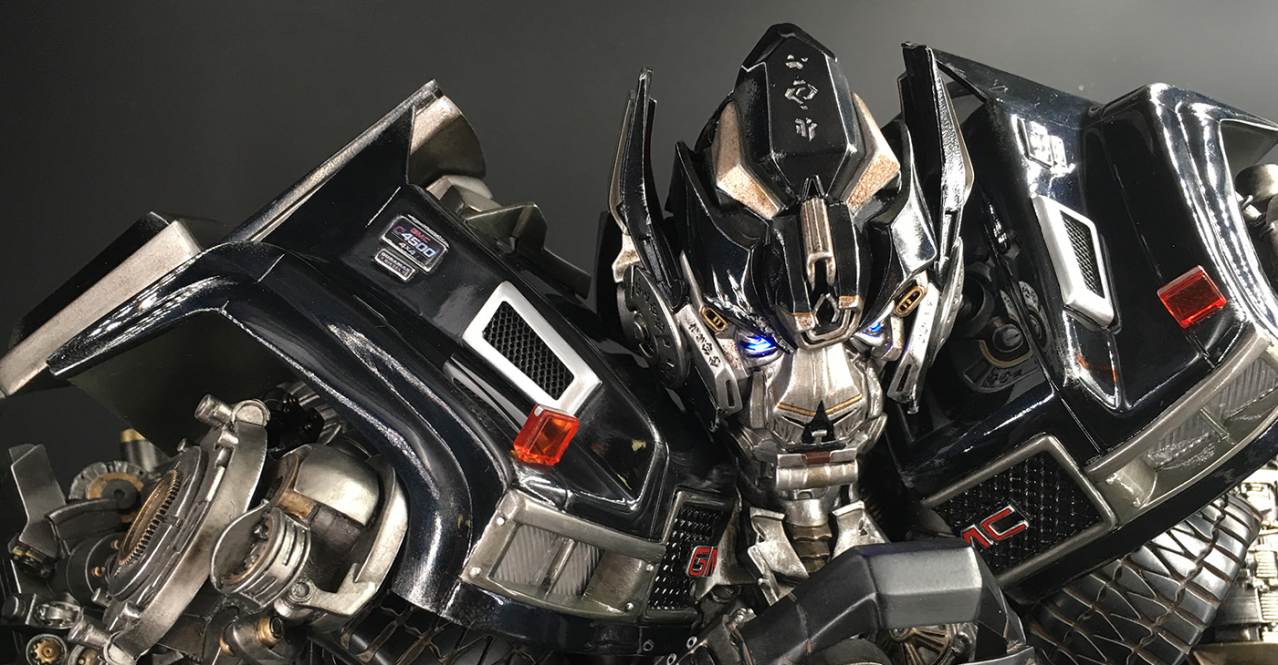 Prime 1 Studio continues to impress and amaze with its line of incredibly detailed statues from its Movie Masterline series. This time they bring us the release of Transformers (2007) Ironhide in all his bulky and well armed glory.

We have a number of images of this 24-inch tall masterpiece from a user on baidu.com that include the packaging, the unassembled pieces and of course, the fully assembled figure.

For anyone unfamiliar with Prime 1 Studio, their products are high-end premium collectible statues that feature intricate screen-accurate sculpts and paint decos with an attention to detail rivaled by no one. These statues could be considered the absolute apex of collectibles for Transformers Movie fans.

Read after the jump for more details.

END_OF_DOCUMENT_TOKEN_TO_BE_REPLACED

Always striving to give Transformers fans the figures they want and need for their collections, Fans Toys continues to expand on its upcoming ’86 movie roster with the addition of FT-24 Rouge (Masterpiece Arcee). She is obviously meant to scale with their upcoming releases of Hoodlum (Hot Rod), Koot (Kup) and Apache (Springer) as well as their already released Sovereign (Galvatron).

Thanks to board member and Fans Toys spokesman dalianjj, we now have official prototype images of Rouge which showcase the articulation and attention to detail that we have come to expect from Fans Toys’ figures. In addition, these pictures display the swappable chest piece accessory which allows collectors to give the figure a more movie-accurate appearance. It is also reported that Rouge will come with four swappable faces for further customization.

Unfortunately we do not have a release date or pricing information for this figure, but be sure to drop by the discussion thread in the link below to share your thoughts. In the meantime, keep your eyes peeled for the pre-order to drop at your favorite site sponsor.

Brad Grey, the former chief of Paramount, died on Sunday from cancer at his Holmby Hills home with his family by his side. He was 59.

Grey stepped down as chairman and CEO of Paramount Pictures earlier this year after leading the studio for 12 years. He came to Paramount from Brillstein-Grey Management, the talent agency he co-founded with the late Bernie Brillstein in 1984.

While Grey left a mixed legacy behind at Paramount — during his tenure the studio relied on such franchises as the Transformers movies, Star Trek films, and Mission: Impossible series and also saw the Al Gore climate change documentary An Inconvenient Truth win an Oscar — as a manager, he left an even more indelible mark on the culture, playing a role in bringing such iconic TV series as The Larry Sanders Show, The Sopranos, and Real Time with Bill Maher to cable TV.