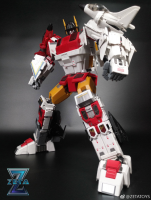 Zeta Toys brings us the latest batch of pictures from their on-going project Kronos (Masterpiece Superion).

As has been the case in past projects, Zeta’s hallmark is the use of parts-forming in order to create the largest and most stable combining figures currently available. As you can see, Kronos is no exception and is capable of dynamic poses and a degree of articulation that has never before been possible of a combiner of this size and complexity.

Zeta is making this amazing Superion as their follow up to their very well received figure Armageddon (Masterpiece Bruticus). While only the first two Aerialbots have been released, Silver Arrow (Silverbolt) is set to release soon, followed shortly by the remaining two figures, so it won’t be long until collectors will be able to form this impressive and literally MASSIVE combiner.

Now is the best time to get your preorder in for this set as it’s extremely affordable and likely to be highly popular with Masterpiece collectors.

Feel free to jump over to the discussion on our boards to weight in on this highly impressive figure.

Direct from the Gigapower Facebook page comes pictures of their newest entry into their Gigasuar line, HQ-04 Gaudenter (Masterpiece-styled Swoop).

As per usual, GigaPower goes above and beyond for their versions of the vaunted Dinobots. Their Gigasaurs are the largest versions of the Dinobots available, typically have more of a toy-based aesthetic and are massively impressive and imposing display pieces.

Gaudenter features intricate and detailed paint apps over the entirety of the figure, numerous chrome pieces of varying colors, as well as an impressive array of the weapons associated with the classic character of Swoop. Giga did go one step further and added in their hallmark flame effects for not only the dual swords, but also flame effects to simulate the rockets firing!

Gaudenter comes in both blue and red torso versions and will be released in both chrome and metallic finishes. This amazing figure is listed for pre-order from our sponsors and should be available in the coming months.

And the hits just keep on coming…

As a direct follow-up to their amazingly well received figure, Sovereign (Masterpiece Galvatron), Fans Toys has released colored test shots (colors not final) of their upcoming FT-29 Quietus aka Masterpiece Cyclonus. This figure was previously announced under the banner of Fans Toys sister company, Perfect Fusion, but appears to have been redesignated as a Fans Toys release. Initially it was unclear whether or not Fans Toys would include the add-on accessories that would have given collectors the ability to turn Quietus into the IDW iteration of Cyclonus, but additional pictures have been released and these pieces, as well as a Targetmaster figure, will be included with Quietus.

As of right now, there are no details regarding pricing or release date, but with Quietus at such an advanced stage of development, let’s hope a pre-order is available soon and that this incredible looking figure comes out sometime later this year.

In the meantime, feel free to jump into the discussion on our boards to let everyone know your thoughts about this figure. 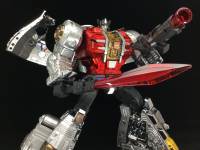 It’s been awhile since we’ve seen anything from GigaPower and their Third-Party Masterpiece-Styled GigaSaurs (Dinobot) line, but it appears the wait is over and it was well worth it. Giga recently released the third bot in their collection, Graviter (Masterpiece-Styled Sludge) and as expected, Graviter is one MASSIVE bot. He towers over both the standard scale Masterpiece figures as well as the previously released and slightly smaller in scale Fans Toys Dinobots.

Graviter features an incredible amount of chrome, a gorgeous, deep cherry red paint job on his torso, silver paint over the rest of the figure, plus extra paint apps throughout to really make the details pop. All of which comes together to give this figure the look of the high-end collectible that he is!

He comes with his plasma rifle, dual misleading launchers and energy sword, plus toy-accurate clear pieces for the head, neck and tail. He even comes with a flame effect piece for his sword!

Does this massive figure have a place in your collection? Does its sheer size and level of detailing leave you thoroughly impressed? Feel free to jump into the discussion thread to make your opinion known.

Graviter is currently available and shipping from many of our site sponsors. 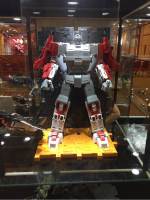 We have our first look at the prototype combined mode of Zeta Toys Kronos (Masterpiece-styled Superion) courtesy of 图片】回复：貌似来早了【变形金刚玩具吧】_百度贴吧 .

We had previously seen prototypes and colored test shots of the first two figures from Zeta’s Aerialbots project, specifically their take on Air Raid (Air Strike) and Fireflight (Flyfire), which can be seen here being used twice for each arm and leg. In addition, we recently also saw the line art of the remaining three figures as well as the combined mode, but this is the first time we have seen a prototype of the combiner torso.

Kronos is expected to scale with your Masterpiece figures and stand an impressive 18-20 inches tall when combined.

These figures, along with their Combaticon counterparts from Zeta, can be ordered through all of the TFW2005 sponsors. 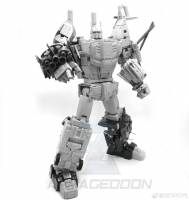 Courtesy of resident cyber-sleuth and TFW2005 board member daimchoc, we bring you the first clear image of Zeta Toys Armageddon, the combined mode of their take on Masterpiece-styled Bruticus/Combaticons.

The combined mode does feature an extensive amount of parts-forming to achieve the impressive size, amazing proportions and incredible stability that was showcased in Constructor (Masterpiece-styled Devastator), the previous figure from these designers. Armageddon appears to have parts-formed hands, feet, thighs, waist, lower torso, head and chest plate, but as stated, these added parts lead to a dramatically more stable combined figure.

These figures are intended to match with your Masterpiece collection, but in this case, at a fraction of the cost. The first two members are currently available for pre-order through a number of our site sponsors for roughly $60 each, with an upcoming release date in late August. 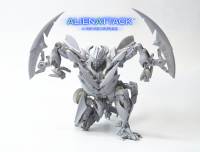 It may have taken a few years, but it appears that a third-party company has once again come through to provide a badly needed figure for a inexcusably neglected character.

TFW2005 board member and purported XTB and KFC owner, ibot (aka Keith) has released prototype images from yet another company with which he is affiliated. Alien Attack Toys has announced SFT-01 Firage, a Masterpiece-styled homage to Transformers: Dark of the Moon Dino.

This prototype involves some truly mind-blowing engineering that somehow manages to take a Ferrari and turn it into an unbelievably screen-accurate representation of Dino.

“This figure is a Deluxe figure with about 15cm robot height, rubber tyres, ABS+ Die cast material, due to arrive by 4th quarter of 2017.”

“Should be around $55.00 retail from AAT reliable source.”

From this description, it appears that this figure is meant to scale with the newly released Movie Masterpiece line and looks like it would fit in right next to Bumblebee and Optimus Prime.

How do you feel about Alien Attack Toys taking on this neglected movie character? Feel free to share your thoughts on our discussion boards.

TFcon, the world’s premier and most popular fan-run Transformers convention, returns for 2017 with a bang. As we have come to expect, all of the major third-party companies are in attendance and ready to showcase their upcoming products for the eager masses.

The ever-vigilant TFW2005 staff will be updating this thread periodically throughout the day with new information and new reveals, so be sure to check back to see what new and amazing figures are on display at the convention. If you are fortunate enough to be in attendance, feel free to share any pictures you feel warrant our attention and we will be sure to add them to the round-up.

Credit to daimchoc, deathsheadIII, Turbuine027, Seth Sunthay and many others from the 2005 boards, as well as dogcades on Twitter and our site sponsors Toy Dojo, The Chosen Prime and Ages Three and Up for their contributions and continuing support of our coverage.

Stay tuned for the TFcon product panel later this afternoon for the full spread of product images from all of the major players.

No, your eyes do not deceive you, that does appear to be a woman’s arm in that picture and not a toddler. This is one project that undeniably lives up to it’s name.

Given it’s enormous size and sheer mass, Fans Toys has decided to release Terminus Giganticus (Omega Supreme) in two parts over the next few months and we have the first in-package images of both sets of this gigantic figure. While we currently do not have box art to share with you, we are fortunate enough to have in-package images featuring a finalized version of the figure including G1-styled decals pre-applied to the various parts, which seem to indicate that this figure is pretty well set to go.

Part A of this set (which includes the torso, wings and backpack) is scheduled to be available from your favorite retailer hopefully sometime this month with Part B (the arms and legs) set to follow in August.

Feel free to click through to the discussion forum to weight in with your thoughts on the enormous, gigantic, humongous-ness of this literally awesome figure. Also, don’t forget to secure your pre-order for this impressive beast.

Finally throwing their hat in to the ring for third-party Masterpiece-styled combiners, X-Transbots recently announced their first entries into their Monolith (Menasor)/Berserkars (Stunticons) project.

These figures are being marketed as true homages to the Generation 1 cartoon characters they are meant to represent and feature more of a block-style design with few extraneous details, more in line with what we know and love from G1.

The first of this set is scheduled to be released in the 3rd-quarter of 2017 and can be pre-ordered from a number of our site sponsors for absolutely unbelievably reasonable prices.

See more details, including the price you need to see to believe, below the cut and feel free to jump into the discussion on our boards. So far the reception by the fandom seems to be very favorable, but feel free to add your voice to the conversation.