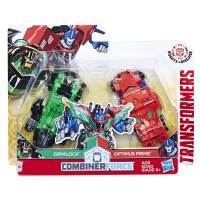 TFW2005 board member Dilbertron has found a One-Step Soundwave from the Transformers Robots in Disguise Combiner Force toy line in Indiana.

The Decepticon figure was spotted at a Target in Indianapolis this past weekend, so now is the time to start keeping an eye out if you are in the United States.

For those interested in adding this one to their collection, good luck and happy hunting!

Just after TFW2005 member Nevermore spotted the next wave of Transformers: The Last Knight Tiny Turbo Changers at German retail, fellow member, Omegastoopreme, has also just found them at an Asda in Shoeburyness for £2.25 (normally £3).

It looks like the series 2 figures are starting to come out in full force, so now might be the right time to start your search if you’re looking to pick up more of these tiny blind bags.  The characters in this wave include Shockwave, Megatron, Berserker, Cogman, Bumblebee, Sqweeks, Chopter, Barricade, Optimus Prime, Starscream, Drift and Hot Rod.

If you don’t want to leave your pickings to chance, you can also check out our identification guide. 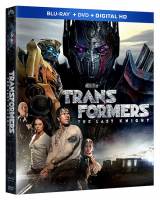 Transformers: The Last Knight topped Wonder Woman for the top spot on both of NPD VideoScan’s national home video sales charts. One chart is solely dedicated to Blu-ray Disc sales, while the other includes sales for both Blu-rays and DVDs. Third place overall went to 47 Meters Down, while Guardians of the Galaxy Vol. 2 had the third most Blu-ray sales. The Transformers 5-Movie Collection ended the week in the 14th spot in the overall chart. The results are from the week of Sept. 24  (The Last Knight hit store shelves on Sept. 26).

During that first week, 70% of the film’s sales came from Blu-rays, which was just a small step down from Wonder Woman‘s 73% during its first week.

As for home video rentals, The Last Knight debuted in the second spot behind Wonder Woman on Home Media Magazine’s rental chart. This is partly due to Wonder Woman not being available through Redbox during its first week on disc. The Last Knight, however, was released through Redbox during its first week. 47 Meters Down followed in third, while Captain Underpants and Baywatch rounded out the top five.

Have you bought your copy of Transformers: The Last Knight yet? If you haven’t, make sure to check out our complete breakdown of every single version available!

The latest wave of the Transformers Robots in Disguise Combiner Force one-step changers have been spotted in Germany by TFW2005 board member Nevermore. They were found at a Toys ‘R Us in downtown Essen.

The figures in stock included Heatseeker and version three Strongarm. 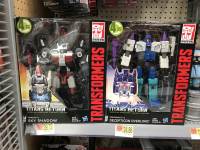 Great news for those looking to grab Titans Return leader class Overlord, especially for those in Maryland. The figure was spotted by TFW2005 user Deathy G1 at a Walmart in Hagerstown.

Overlord is packaged with a Titan Master Dreadnaut figure and can transform from robot to a jet, tank and battle station.

LAIKA Studios tweeted out an image from the Transformers Universe: Bumblebee set of director Travis Knight standing next to what looks to be a red, modified 1971 Plymouth GTX.

LAIKA is not involved with the Bumblebee spinoff however, as they simply posted the image due to Knight being their president and CEO.

The vehicle does seem to have a Cliffjumper vibe, however as board member Dotmshockwave pointed out, it actually seems to have a Decepticon insignia below the hood.

“Bumblebee” is currently filming in Vallejo, California and seems to be taking place in a fictional town called Brighton Falls. Filming is expected to wrap in November, while the movie is set to release December 2018.

Who do you think this Transformer will be? Sound off on the TFW2005 boards!

Actor Jason Drucker recently posted a photo from the set of Transformers Universe: Bumblebee. The image features Hailee Steinfeld, Drucker, Pamela Adlon and director Travis Knight. There has been speculation that the trio of actors will be playing daughter, son and mother, respectively.

The background is scribbled out, however they seem to be at a location that will represent their home in the film. We learned a few days ago that production is currently in a residential neighborhood in the Peacock Gap area of San Rafael.

Filming for Bumblebee began on July 31 and will take place entirely throughout the state of California until Nov. 15.

In a recent hour and a half long interview about his career, Steve Jablonsky briefly talked about the difficulties and frustrations of creating the music for Transformers: The Last Knight.

“I do think the first film was kind of more put together than maybe some of these more recent ones, like the Last Knight, it was great to work on, we had a blast, but there were a lot of picture changes right up ’til the end,” he said.

Probably the biggest challenge for Jablonsky while working on the Last Knight was the constant shortening of film. After critics and audiences alike complained about the runtime of Transformers: Age of Extinction, the latest film was continuously compacted down to avoid the same issue. This even extended to the end credits, which only lasted through the duration of one song as the credits flashed rather than the traditional scrolling.

“Bay, up until the last minute, was really trying to shorten The Last Knight. So every cut we would get, the scenes would all kind of be [shortened],” Jablonsky said.

The shortening of the film ultimately messed with the timing and tempo of the music, which led to some issues as it would start to no longer fit in the scene, leading Jablonsky to throwing out sections of the music and starting over.

“That’s one of the reasons why I released such an obnoxiously long soundtrack for this new Transformers, because we had so much music and I said ‘I just want to release everything the way I wrote it, not the way it’s in the film, because it’s hard for me to watch the film when I just hear every edit,'” he said.

Jablonsky noted that toward the end of production, it would get to the point where editing changes to both the picture and the music would be made without being notified, which he understands since there was so much going on and it would be impossible to relay that information back and forth so often, however he feels that the music was not the best it could be in the final version of the film.

The entire interview can be viewed after the jump. Jablonsky discusses things such as beginning his work with Michael Bay for the first time, writing the music for Transformers: Revenge of the Fallen and more. His words on The Last Knight begin at 31:07.

END_OF_DOCUMENT_TOKEN_TO_BE_REPLACED

The final domestic numbers are in for Transformers: The Last Knight’s third weekend in theaters. The film collected $6,376,578 July 7-9 as nearly a thousand theaters dropped the film, including all IMAX showings, to make way for Spider-Man: Homecoming. By comparison, Age of Extinction collected $16,302,415 during its third weekend.

Internationally, The Last Knight has earned $376.8 million, bringing the worldwide total to $495.8 million. After Age of Extinction’s third weekend, the film had totaled $752.3 million across the world.

The movie is still enjoying success in China however, earning $218.3 million so far. After the success of Age of Extinction, The Last Knight was marketed heavily to Chinese audiences.

The Last Knight has yet to be released in most of Latin America, Israel, Japan and Spain. The film opens in Egypt tomorrow (July 12).