Well it’s Saturday and with it comes a nice surprise (and no, it’s not me actually posting something.) Red Leader (TFW Supporter, owner of Kapow Toys, and all around nice chap) has splurged a bit on the bay of E and garnished a new Reveal the Shield Turbo Tracks which he has been so kind as to review for us today.

A bit of unfortunate news as he reports that it cannot do a flying car mode due to the placement of the wings. Otherwise this figure looks to be a near identical, more poseable, update to the G1 character.

Click on the title to see all of Red Leaders pictures and read his full impressions of the figure!

The next issue of Transformers Ongoing will be coming out on Wednesday and, thanks to Comicbookmovie.com, we have a little preview for you all.

But first a couple questions: Do you like character depth? Do you like the idea of a Decepticon working with the Autobots? Do you like the Predacons? How about Optimus Prime barehand fighting Rampage? If you answered yes to any of these questions, then it looks like this issue is going to be for you!

Click on the title for 2 more covers (they’re all so good) and the first five pages of this issue! 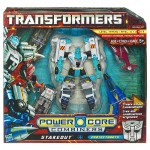 Entertainment Earth adds more pictures of interest! This time it’s the next wave of Powercore Combiner 5-packs which includes Stakeout with the Protectabots and Crankcase with the Destrons.

Both these sets are listed as pre-orders with expected release dates of September.

Holy TRU 3-packs Batman! Toys R Us has been throwing out the newest of new toys recently and they don’t seem to want to let up as their newest exclusive 3-pack, dubbed Rampage Among the Ruins, has been found in an Orange County Toys R Us.

This pack doesn’t include any new characters, but rather 3 deluxe repaints (two of which have been repainted several times *cough* Canon Bumblebee and Ravage *cough*) Like the Gathering at the Nemesis TRU 3-pack, the biggest draw of this set is probably that it’s the only way to get a certain deco of a specific character. In this case, it is a movie accurate deco of Deluxe Rampage in red. Now Hasbro did release a red version of Rampage by itself, however, that had very limited (and poor) distribution and was not as detailed as this version.

If you like Bumblebee, Ravage, or never got a Red Rampage, this is a set for you!

Our inside man D-Drive has sent over another list of spiffy items slated to ship next Wednesday September 1st:
TRANSFORMERS DLX AF ASST 201002

More characters from the rich history of Transformers join the Transformers action figure line in the Deluxe scale! With characters such as Elita-1, Tuner Skids, Sidearm Sideswipe, Hailstorm, Ironhide, Jetblade, Sea Attack Ravage and Battle Blades Bumble Bee to choose from, collectors will find more than meets the eye to these figures! Blister card packaging.

The AUTOBOT special ops crew, THE WRECKERS, are sent to investigate Garrus-9, a prison that fell to the DECEPTICONS three years ago with no communication in or out since. Who’s really behind the prison siege, and what dark secret awaits SPRINGER there? The answers to those questions will send this mission to the razors edge!

Let the wallet crying continue as Hasbro continues to release everything at the same time! First it was HftD Scouts wave 2, the new coloring of Legends Devastator, HftD Legends, and finally Wave 2 of Deluxe HtfD figures.

Now we have several members reporting that Generations Wave 2 (which includes War for Cybertron Megatron, and Darkmount(Straxus)) is on shelf and waiting to be picked up. It’s been located up and down California’s coast as well as seen (and photographed) in Bettendorf, IA. I know once I get time, money, and a lot of luck, I’ll be out there hunting with my fellow TF fans so good luck to you all!

Update:2005 Boards member exomega255 reports finding not only the Wave 2 but also Generations Wave 3 at the Toys ‘R Us in Carle Place, New York. Wave 3 introduces Red Alert and Cybertronian Soundwave. Check out the picture proof!

For those eagerly awaiting the release of Fansprojects newest upgrades (like myself), they have started showing up in the US (and Canada) and our own daelite20 has already picked up two sets so that we may live vicariously through him until BBTS and TFSource get their shipments.

I won’t spoil the transformation by posting all the pics of the instructions here (which *spoilers* are included in this review) however, on the last page is an interesting little feature showing the line of Fansprojects Crossfire products. Included is of course 01 (Superion) and 02 (Bruticus) but also there is a space for 03 (?). What could this be? The new combiner they are working on? Or perhaps Devastator will be getting the Fansproject treatment as well.

Check out daelite20s full gallery of pictures by clicking on the title and I hope it helps sooth the wait by even just a little.