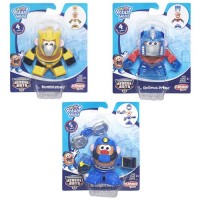 Entertainment Earth has posted a pre-order page for Transformers Mr. Potato Head Minis Wave 2.  These toys function like regular Mr. Potato Head toys with pieces from robot characters.  The newest wave will be available in March and is inspired by Transformers: Rescue Bots.  Characters featured in this wave include the Rescue Bots versions of Autobots Optimus Prime, Bumblebee, and High Tide.  Fans and collectors who want to pre-order this wave can do so at the link above.

Thanks to Australian fan site Ozformers we have an in-store photograph from the Belconnen Toys “R” Us of Transformers: Robots in Disguise Titan Changer Sideswipe and a brand new redeco of Three-Step Changer Grimlock.  The former is a first for Australia, and the latter has not been seen at retail anywhere yet.  Good luck to those Australian Transformers fans interested in acquiring these figures.

My Entertainment World has recently listed the currently untitled Transformers 5 on its web site.  While not many details about the Summer 2017 film are known at this point in time, there is an interesting tidbit revealed nonetheless.  The site mentions a filming start date of May 2016, which is in line with the beginning of production for the previous Transformers films.

Where filming will begin is unknown at this point, although director Michael Bay recently mentioned that production would return to Chicago at some point.

TFExpo has announced via Facebook that long time Transformers voice actor Michael Bell will be in attendance at TFExpo 2016.  Bell is the first guest announced for the event, which runs August 5 and 6 in Wichita, Kansas at the Hotel at Old Town.  He will be available for speeches, greetings with fans, and autographs throughout that weekend.

Mr. Bell has voiced a number of characters in shows and games over the decades, including the Generation 1 versions of Prowl, Brainstorm, First Aid, Sideswipe, Swoop, Bombshell, and Scrapper.  He is also the voice of Transformers: Rescue Bots High Tide and Transformers: Devastation Sideswipe and Scrapper.

Today Collider posted a video of an interview with Transformers 5 director Michael Bay.  The interview is largely focused on his latest film, 13 Hours: The Secret Soldiers of Benghazi.  However, near the end Bay discusses Transformers 5 and the future of the Transformers Cinematic Universe.  While Bay does not reveal any details about Transformers 5, future spin-off movies, or their plots or characters, he does say that the writer’s room produced some cool ideas and tried to connect things together.  Click the video link in this article to check out the full interview.

The description is as follows:

It sounds like this may be the perfect Transformers comic to get into the holiday spirit!  Check out the preview pages attached to this post. 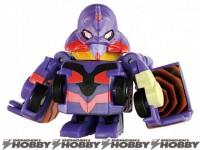 Thanks to TFW2005 member ericepy for snapping a picture of new toys of Transformers: Rescue Bots characters Chase and Blades.  The new figures were spotted and purchased at a Wal-Mart on Central in Toledo in Ohio, so they may be available at a number of locations in the States.  Additionally, it is reported that they were purchased for around eight U.S. dollars, which is less than the Hasbro-listed retail price of $9.99.  Whether that is the price at all Wal-Marts or just certain locations remains to be seen, but either way the figures are available at retail. We also have reports that the same pair have been spotted at UK retail by UK based TFW member incapable hulk.

IGN recently had an interview with Transformers 5 script writer Akiva Goldsman, who recently headed a writer’s room room to pen story ideas for a Transformers Cinematic Universe.  In the interview Goldsman talks about the writer’s room, the connectivity of future Transformers films, and the importance of the human element in Transformers.  Here is what he had to say about that last subject:

Furthermore, Goldsman also mentions the animated prequel that takes place before the events of the previous live action films.

Check out the full interview at IGN!

Thanks to TFW2005 member Ra88 for sharing with us some artwork from the Twitter account of Takara Tomy designer Yuya Onishi.  The artwork shows us some lovely renditions of Voyager Class Galvatron from the 2016 Titans Return toy line, which is a part of the Transformers: Generations toy line.  The art shows Galvatron in both his robotic glory and his powerful artillery cannon alternate mode.  Check it out!