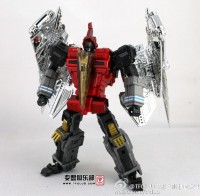 Next up we have in-hand pictures of the latest figure from GCreations, SRK-04 Blade! Thanks to TFClub on Weibo we have our first look at this version of Swoop in his pteranodon, arm mode, and robot mode. There is also a look at the multitude of accessories that come with him, which include a giant red sword, two smaller shortswords, and a pair of blasters/missile launchers. This figure is looking particularly impressive, and hopefully we have a full view of what this combiner will look like very soon.

Thanks to site friend and sponsor ToyArena on Facebook and Guan Cheng Photo, we have a glance at the latest of TFC Toys’ Hades combiner members. Here we have a look at not just of Cerberus, but Rhadamanthus as well. The newest figure is looking mighty awesome just like his predecessor, and appears to transform into a sort of combat buggy equipped with missile pods. With how quickly these guys have been coming out, is there a possibility we might have the full team assembled before the fall? Only time will tell! 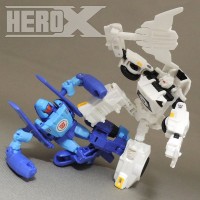 Thanks to HeroX on Twitter, we have some new in hand images of the Transformers Adventure Dogfight And Runamuck set! This set, the mail-in exclusive for Million Publishing’s Generations 2015 book, are some nice, sharp redecos of Combiner Wars Viper and Transformers Adventure Runabout. Check out the new images attached to this post.

While Botcon weekend was all about the latest and greatest to be coming from Hasbro, the third parties were hardly silent. We’ve rounded up some notable third party info and updates – check out the full low-down after the break.

END_OF_DOCUMENT_TOKEN_TO_BE_REPLACED

Venksta dropped by once again to give us an update on a new project that’s taking preorders already at the Renderform Store, one that should please the Generation 2 Enthusiasts whom also liked the first set of Stunticon weapons he released. Generation 2 colored weapons! Each of the weapons seems  to be tailored to match the accent colors of each of the Stunticons, and more, there are also three variants of the Menasor/Motormaster cannon, a nice purple, a generation 2 turquoise that is color matched to the Hasbro Hands and feet, and a final Prototype Green surprising varient that is color matched to the Generation 2 Prototype toy. Also teased is a weapon for Blackjack, which will be a freebie and in one of the same three colors as the Eliminator Rifle for those who purchase the four gun set and the Eliminator Rifle.

Additionally, those whom may have been turned off by the roughness of the original prototypes of the Road Bandit and Road Shogun heads might want to give the generation 2 colored ones a look as these are actual production pieces and represent the impressive final product that includes two different faces!

These items are set to be limited with only seventy five sets of the weapons being made available and only thirty sets of each of the Menasor heads. So act now or miss out and join the discussion on these items! 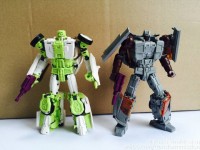 Boom! Coming from TransformMission’s Weibo and spotted by the eagle eyed TFW2005 user icemanff23; we have our first test shot images of TransformMission’s take on WildRider and Breakdown. These guys are MP scaled and styled after the pre-Combiner Wars Menasor and are looking really good. Come along and take a look at the pictures and discuss this Masterpiece IDW project with the rest of us! 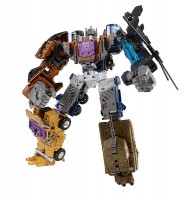 Coming to us from E-Hobby and Amiami, and spotted by eagle eyed TFW2005 members Type-R and PoweredConvoy, we have our first crystal clear images of UW-07 Bruticus and the rest of the Combaticons in all their cartoon glory. Of note, Blast Off seems to ditch his esoteric looking robot mode and actually looks good, now that we have clear images of him. In addition Vortex is also looking pretty cool as well while Swindle seems to lack any changes at all except for a three barreled blaster. As to if they fixed the waist issues with Brawl, that has yet to be seen, but we can hope! Take a look at the pics and join the dicussion gang!

Well, if anyone was ever wondering if a third party might enter the ring to take on HasTak’s Unicron, you now have your answer! Spotted by TFW2005 user Daimchoc on Garatron’s Weibo, we have our first look at the tower of planet munching power that is G.O.D. 02 – Galaxy Demolisher! This guy looks to be the largest single third party figure to date, towering over both Cybetron Primus, and Armada Unicron both. This bad boy features rings and an aesthetic similar to the regretfully unproduced Beast Wars Neo Unicron(MAKE IT HAPPEN HASBRO AND TAKARA!), and LED functions included in the small moon that transforms into a gun, and inside of the figure itself which will hopefully transition to the rings in the full production piece. Now come on in, munch on some planets, open the matrix and tell us what you think!

Update:  IT IS THE BW NEO UNICRON REMADE! 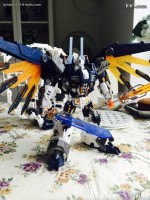 Well look what we have here folks via TF Upgrader’s Facebook Page! Coming out yesterday and taking everyone surprise is the latest in Mastermind Creations Reformatted line, and perhaps, one of it’s most anticipated figures yet, Seraphicus Prominion. Originally slated for an April release, this figure seems to have come out a bit early in limited numbers via Planet Steel Express, and has made it’s way into various fans hands in Asia. Apparently the orange blade is exclusive to PSX and is only available to those who order the combo including Seraph, and the trailer together as long as they are preordered before the first of February.

Something of note that is rumored but not completely verified is the fact that the figure itself, sans cab, will not come with any swords. So, keep that in mind if you’re on the fence about ordering the combo pack. For now though, join the discussion and check out the pictures after the jump! Also of note, the two katanas the figure comes with are apparently glow in the dark swords, so they may or may not be gray or a pale blue.

THUNDER! THUNDER! THUNDER! THUNDERCLASH….! HOOOOOO! And here we are folks with another offering from Renderform. Hot on the heels of the popular Combiner Wars Stunticon Upgrade kit, TFW2005 Member Venksta has dropped by to offer up another amazing upgrade kit for your Combiner Wars needs. This time gang we have a kit that enhances the Reprolabels kit that helps turn Combiner Wars Battle Core Optimus Prime into Thunderclash, by offering a new head and rifle to complete the transformation! The first run of these things has already sold out, so head on over to the Renderform Store, secure your copy of the second run which is limited to fifty units and make your Combiner Wars Hot Rod figure feel like he does in the IDW Comics by placing him next to this bad boy!