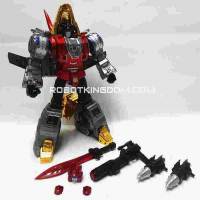 Thanks to site sponsor RobotKingdom we have our first look at the final production colors of their take on a Masterpiece-styled Generation 1 Slag as well as it’s box art. The version show is the chrome version which is 1 of 2 they have planned with the second to be a metallic version. Some of the accessories this figure will come with are a sword and blaster, along with dual missile launchers,  clear plastic covers for his dino-mode head and tail to replicate the look of the original G1 figure, switchable red and black heads as well as alternate facial expressions. What really makes this figure stand out is it’s impressive paint job covering nearly the entire figure! Due to be released soon get your pre-orders in now by placing an order with one of our site sponsors.

Click the link to view additional images and take a gander at this impressive beast of a bot! 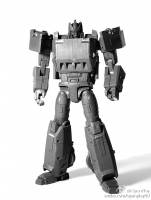 Coming from OpenPlay’s Weibo page we have our first look at the resin prototype of their take on a Masterpiece styled Generation 1 Springer. Some key features of this piece include an adjustable hatch/cockpit between car and helicopter alt modes, pop up headlamps for car mode and a robot height of around 24.5cm/9.6 inches. This is OpenPlay’s first venture into the world of 3rd party robots and while the name may not yet be finalized I for one cannot wait to see more of this amazing piece.

Great news coming in from IndieWire.com, “Transformers: The Last Knight” is being shot using ARRI Alexa 65 6K cameras. The first film to use these remarkable cameras was in the film “Captain America: Civil War” and is being used to film Marvel’s “Doctor Strange” as well as “The Avengers: Infinity War” parts 1 and 2. So what does this mean to us every day movie goers? Expect to have a stunning  visual experience for those who will watch the 5th instalment of the Transformers live action saga in Imax theaters.

Great news for our fellow Transformers fans across the pond. Hachette Partworks is offering the complete collection of Generation 1 graphic novels, both Marvel US and UK as well as the Dreamwave era, for the first time as one epic hard back series. Some key features of this set are:

With 60 issues planned for the collection this is a must have for any Generation 1 fan lucky enough to live in the UK. You can get your subscription started to day by ordering here: The Definitive G1 Transformers Collection.

Just a few short days after reporting that Robots in Disguise Mini-Con Wave 2 was spotted in Germany, TFW2005 user Nevermore now shares with us that Wave 3 of Robots in Disguise Mini-Con’s have now been spotted in 2 separate Real retail stores in Germany. Decepticon Hammer and Blizzard Strike Slipstream were found at the Real store in Tönisvorst, while the entire wave consisting of Decepticon Back (also known as “Decepticon Forth”), Decepticon Hammer, Blizzard Strike Slipstream and Swelter were spotted in the Real store in Monchengladbach.

Click the link to check out the images and join the discussion on the boards.

Thanks to long time TFW2005 user Nevermore we have our first retail sighting in Germany for Combiner Wars voyager wave 5! Scattershot was found at a Reiner Frütel Sport & Spiel in Duisburg-Rheinhausen while his case mate, Onslaught, was not on the shelf it’s been reported that he was spotted else where in Germany. Happy hunting to our friends across the pond!

Please click the link to join in on the discussion.

Once again thanks to long time TFW user Nevermore we have our first retail sighting of Wave 2 Mini-con Deployers for the Robots in Disguise line for Germany. Wave 2 consist of Blizzard Strike Drift and Jetstorm also Overload and Backtrack. This pair of deployers were spotted at the Toys”R”Us  located in Bochum’s Ruhr Park shopping mall. So to our fellow collectors in Germany happy hunting!

Thanks to long time TFW member Nevermore we have our first world wide retail spotting of Robots in Disguise Legion class Blizzard Strike Optimus Prime and Ratchet. This pair was found in a Real, which is a chain of retail stores, in Bochum-Wattenscheid. Optimus Prime is a repaint of his previous legions class toy and is a cool blue where as Ratchet is a redeco of Strongarm. With any luck we will start spotting this pair pop up in other countries soon! 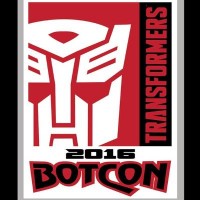 Via Botcon’s twitter page this years convention comic is going to be a partnership with  IDW dubbed Transformers: Dawn of Predacus. Botcon hails John-Paul Bove as the lead writer along with Corin Howell as it’s artist. Mr. Bove worte “The story is completely in continuity (the wibbly wobbly G1, G2, BW continuity) and features some HUGE moments in TF history.” While Botcon tweeted “This years story is set within the IDW Transformers continuity that features The Ascending and The Gathering. Going to be great!”

This comic will be made available first at Botcon, have a convention exclusive cover and all the Botcon program information.

Thanks to site sponsor TFSource we have a look at Mastermind Creation’s division Ocular Max take on a G1 masterpiece style Inferno dubbed Backdraft. Backdraft features retractable supports for the ladder truck as well as a collapsible ladder. This fantastic figure also comes with a very G1 inspired blaster, tinted windows and some nicely applied chrome!

Available for preorder now at some of your favorite retailers with up to $30USD off early bird discount and an additional cartoon inspired head lasting until March 1st. So get your orders in soon!

Click the link to join in on the discussion and view the additional images.