Prime 1 Studio, via their Facebook account, they have uploaded an extensive set of official images of their MMTFM-33 Dark Of The Moon Jetwing Optimus Prime statue.

This movie-accurate rendition of Optimus Prime, as stated by Prime 1 Studio team in their Next Level showcase, was planned to be the most impressive and detailed movie Optimus Prime statue ever. Read on for the product specifications:

Price and release date are yet to be revealed, but you can check the complete official gallery here. Alternatively, you can see some key shots after the break together with the full product description. Let us know your impressions on the 2005 Boards!

END_OF_DOCUMENT_TOKEN_TO_BE_REPLACED

We have another confirmed actress for the next Transformers live-action movie. Luna Lauren Velez, who played María LaGuerta in “Dexter” and the voice of Rio Morales in “Spider-Man: Into the Spider-Verse”, has joined the cast of “Transformers 7″.

Talking to us about her new movie Rogue Hostage (which is now available to watch in select theaters and On Demand after being released on June 11), star Luna Lauren Velez (Dexter, Spider-Man: Into the Spider-Verse) confirmed that she recently boarded the cast of the seventh Transformers movie.

“I’m doing Transformers 7 which I’m very excited about,” Velez told us earlier today. “I play Anthony Ramos‘ mom in that film, so there’s some exciting stuff coming up.”

When we put it to her that it must be incredibly exciting to board a big budget franchise like Transformers, she added: “It really is. I have to confess that I haven’t seen any of the films, so to come in a project like this at this moment was really great. I’m excited about that. It’s going to be fun stuff.”

Click on the discussion link below and let us know your impressions on the 2005 Board! 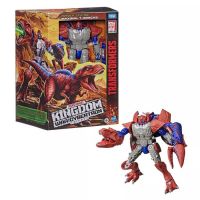 To our surprise, the still not officially announced Transformers Kingdom T-Wrecks has just been listed at Target.com.

The listing, found by Twitter user @id_armed, indicates that T-Wrecks will be sold for $49.99 as a RedCard early access exclusive and limited as 1 item per customer but pre-orders are not live yet. According to the official product description, the street date is July 25, 2021.

Stay tuned with TFW2005 for more updates! Read the official product description and details after the jump and then share your impressions on the 2005 Board!

END_OF_DOCUMENT_TOKEN_TO_BE_REPLACED 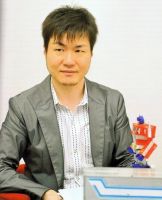 Thanks again to 2005 Board member opoptimus who has posted in our forums the second part of the English translation of an interview with Takara Tomy designer Shogo Hasui.

This interview was originally published in the Japanese Transformers Generations Book 2020. The source of the first translation (in Chinese) comes from ‘Cybertron 600″ on Weixin. On this second part of the interview Mr. Hasui focuses on the design process an early ideas of the Earthrise line and other products like Studio Series Devastator. A very interesting reading for sure.

If you missed part 1 you can find it here. Alternatively, you can read the 2 parts of the interview after the break. After that click on the discussion link below and share your impressions on the 2005 Board!

END_OF_DOCUMENT_TOKEN_TO_BE_REPLACED

Following Premium Finish Optimus Prime in-hand images, now we have a closer look at PF WFC-02 Megatron figure itself. This is a special redeco of the War For Cybertron: Siege Voyager Megatron in a special cartoon-accurate deco.

This figure may have an official US release as it happened with Premium Finish Studio Series Bumblebee and Siege Optimus Prime, so stay tuned with TFW2005 for more updates.

See all the images after the break and the let us know your impressions on the 2005 Board!

Via Chefatron Review on Youtube, we have our first in-hand images of the upcoming Kingdom Earth Mode Sideswipe.

Kingdom finally brings us an Earth mode Sideswipe mold. This is basically a retool of the Siege Sideswipe mold with several new parts and a clean deco with no battle damage. We have several comparison shots next to the original Siege mold for you to spot all the differences. Earth Mode Sideswipe is packed with Maximal Skywarp in the Amazon exclusive Battle Across Time Collection Deluxe WFC-K42 2-pack.

Check out all the images on this news post, as well as Chefatron video review, after the jump. Click on the discussion link below and let us know your impressions on the 2005 Boards! 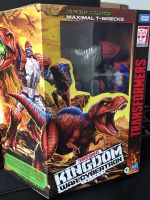 June second week is over and we have another slow week of Transformers sightings. Kingdom T-Wrecks hit shelves in New Zealand and Siege Soundblaster (Mercenary insignia variant), G1 Optimus Prime reissue, and Kingdom Wave 3 Deluxe toys were found in Singapore.

Courtesy of TransFans, BB7 TOYS Newsstand, BBC Actoys and Capcomkai we have a nice set of images taken from Wonder Festival Shanghai 2021 with some Transformers related reveals to share with you. Click on each title to surf to the respective threads in our 2005 Board:

Also, while not a Transformers reveal at all, we would also like to share a fun display of three Robosen Optimus Prime in action. You can watch it here thanks to TF-HK香港變形金剛狂熱份子 Facebook or you can watch a YouTube mirror after the jump together with all the images from the event.

END_OF_DOCUMENT_TOKEN_TO_BE_REPLACED 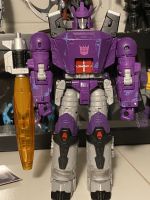 Attention War For Cybertron collectors. Some Kingdom Galvatron copies have been spotted in the US showing a different shoulder assembly compared to the first figures available at stores.

One of the main concerns with the Kingdom Galvatron toy was that the shoulders looked too low in robot mode. Some fans noticed that it could be a misassembly since shoulders looked better if you turned the arms, leaving the metal pin visible. Today, Twitter user @tfradio (in San Diego), 2005 Board member Patrickab7 (in Illinois) and 2005 Board member Dah Padre found copies of Kingdom Galvatron with visible fixed shoulders which look more natural and give Galvatron better proportions in robot mode.

Stay alert when you find Galvatron at retail and check the boxes to try to find this variant. See all the images with comparison shots with the first Galvatron toys after the break and then sound off on the 2005 Board! 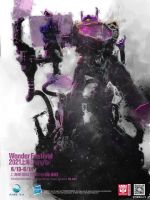 Via the Azure Sea Studio Facebook group, we have our first teaser image of their new G1 Shockwave statue.

The image lets us see part of the design of this statue which seems to be in the same stylized style of other Azure Sea Studios statues in the market. This piece will be on exhibit at the upcming Wonder Festival Shangai this June 13/14, 2021, so stay tuned with TFW2005 for more updates.