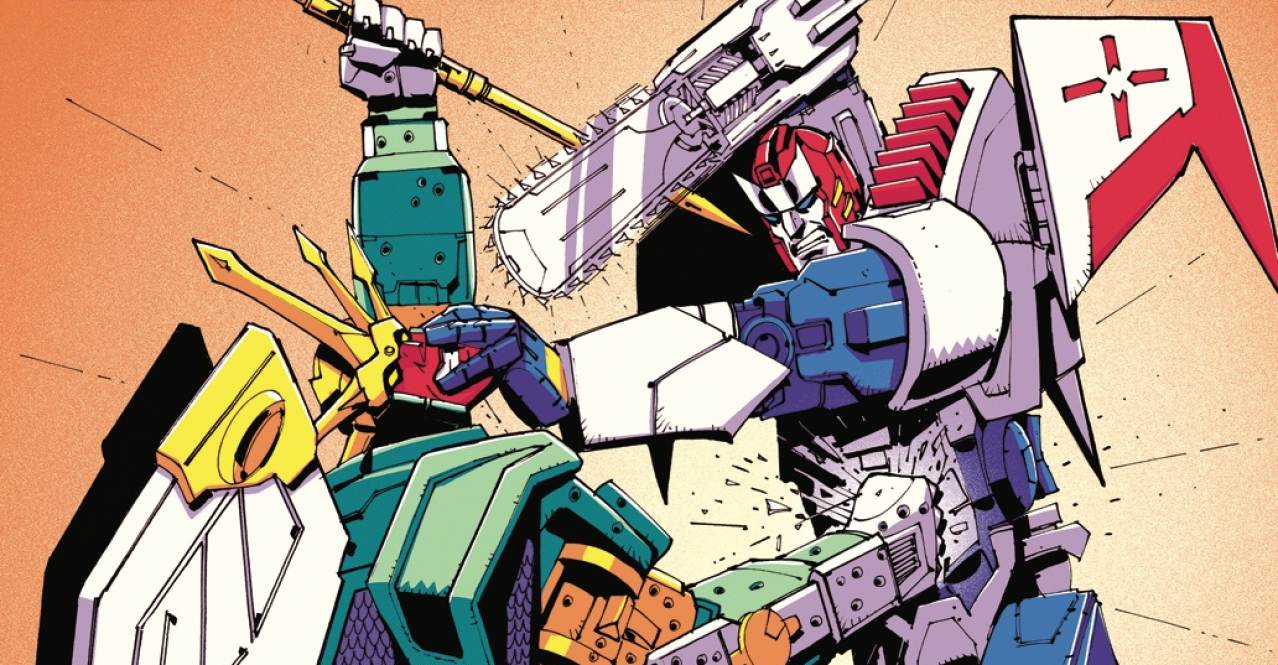 Via Previews World, we have a look at veteran Transformers artist Geoff Senior’s alternate cover for the upcoming Lost Light issue 23. The cover features two of the main antagonists of the series, Pharma and Tyrest, having a free and honest discussion of their differences. Chainsaw hands may be involved.

END_OF_DOCUMENT_TOKEN_TO_BE_REPLACED 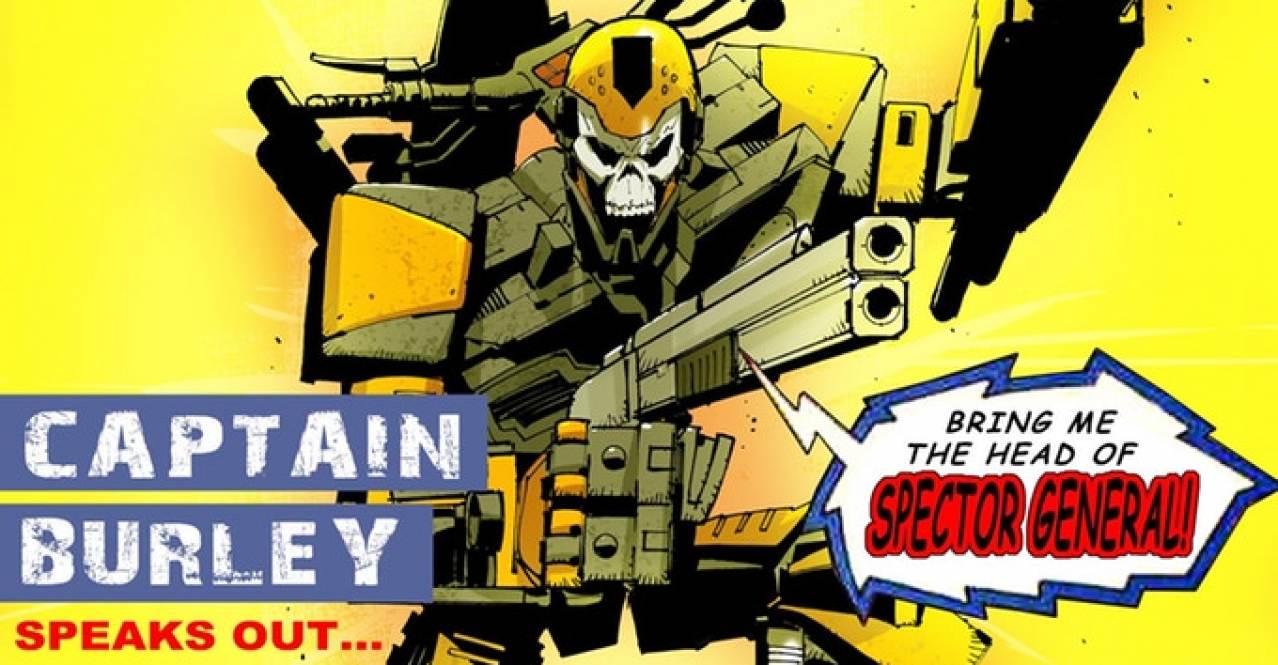 The Unrustable Bastards is a line of all original transforming figures, mostly futuristic bikes and riders.  They had a successful Kickstarter a while back and while not based on Transformers per say, but they do have the same DNA.  The crew behind it are long time TFW2005 Boards members and we’ve followed their progress over the years.  The crew is now running a new Kickstarter to fund their comic book based on the toys, building an all original world for the many figures we’ve seen so far.   We wanted to share that with you today, check out their official press release and hit the KS page here for more details.  Oh, and Transformers comic artist extraordinaire Geoff Senior is doing some art on the project too!

You can follow threads for the toys and comics on the 2005 Boards here: Comics, Toys.

Following on from the success of their Unrustable Bastards Kickstarter campaign and subsequent toy line launch, Mayhem Mekanics is back with a fresh Kickstarter project and an exciting and ambitious new aim: to bring the Unrustables universe and characters to life with a six-issue comic book series.

The Unrustables comic will tell the stories of the Unrustable Bastards – a transforming robot-biker gang – and the conflicts that tear apart their desolate, dystopian home planet of Tombstone and threaten to destroy the gang from within. This original, dynamic fiction will follow Unrustable leader – Burley – and mysterious prodigal – Iride – along with the rest of the Bastards as they clash with rival biker gangs the Spector Rogues and the Yamazuki, as they all try to stay one step ahead of the crooked and brutal Enforcers, stormtroopers for the corrupt and oppressive Oligarchy that presides over the central planets, controlling populations with its choke-hold on information and technology. Featuring high-octane action beats, character-driven narrative and epic world-building, The Unrustables offers a foray into a grimy world of mechanical outlaws, grudges, turf wars, tyranny and betrayal.

These and other characteristics will make The Unrustables a sure hit with fans of such properties as Transformers, 2000AD, Sons of Anarchy, Serenity, Jason Aaron’s Scalped, and Pacific Rim. Its vivid, in-your-face visual style recreates the smash-mouth sensibilities of many of the 1990s comics now remembered with fondness and nostalgia by a generation of adult readers and collectors. Meanwhile, its gritty themes and characters and its robustly satisfying story arcs are more evocative of an HBO or FX drama.

The Unrustables creative team draws upon collective decades of experience and passion to bring their vision into being. The series is written by Sid Beckett (a.k.a. C Z Hazard, author of comedy-horror, Generic Vampire Novel, and Kickstarter-born satirical novella, Not In The Eye), and Ceno Kibble (well-known, long-standing contributor within the toy industry and collectors’ market). The vibrant, engaging art is provided by Bryan Sevilla (whose excellent work has elevated many pack-in comics), with colouring by Nate Hammond and variant cover art by comic book legend, Geoff Senior, whose seminal work on Transformers in the 1980s helped inform the medium’s zeitgeist.

The Unrustable Bastards toy line Kickstarter campaign enjoyed tremendous success, crashing through its most ambitious goals and resulting in the release of a line of transforming toys that have delighted backers and drawn in a multitude of additional fans across the globe. Designed by trusted third party mainstay, Nick Calloway (aka Cassy Sark), these sophisticated toy sets each comprise a robot rider and bike which combine to become an awesome “Mech Machine”, with incredible detail, great poseability and options for customisation, as well as an array of appealing weapon accessories.

The Unrustables team now looks forward to creating something that elevates and expands upon the legacy of the Unrustable Bastards toyline. After all, we always root for the bastards, right?

To be part of this latest Unrustables phenomenon, visit the Kickstarter page. 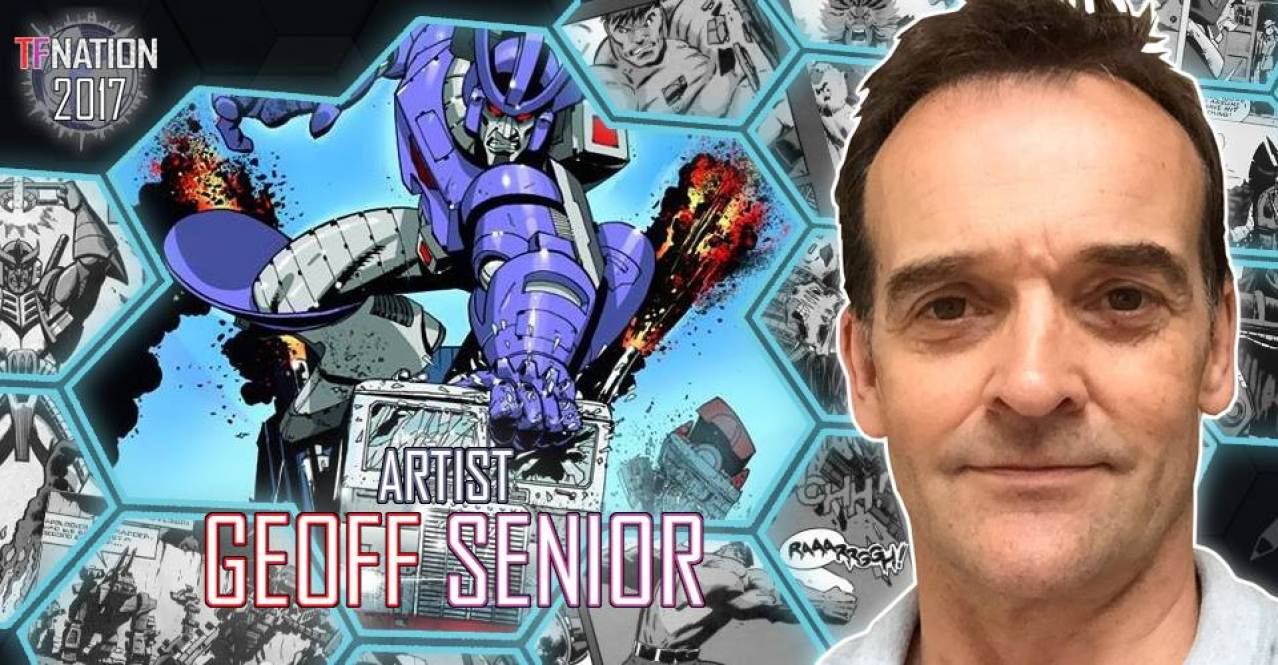 Geoff Senior is one of the best known artists from the Generation 1 comics. His work with its bold angles is considered to be a complement to the work of Simon Furman in the Marvel UK and US comic series, and his work is often looked to by modern Transformers artists as an inspiration. You may also have enjoyed his work in the Generation 2 comic series or IDW’s Regeneration 1, amongst others. He’ll be signing autographs, selling artwork, and even taking commissions via www.geoffsenior.com/.

While strictly not Transformers related, we thought you, our readers, might like to know about a project which Transformers writer Simon Furman and artist Geoff Senior are working on.

To The Death is a creator-owned project, a digital comic book saga set in Earth’s future that echoes the hard-edged sci-fi of Dragon’s Claws and Death’s Head (both of which were co-created by Simon Furman and Geoff Senior) and some of the heavy mech of Transformers. It’s a little different to most digital fare, in that it’s presented in successive full-sized frames (one per screen), really showcasing Geoff Senior’s kinetic, muscular art and letting the story breathe. To say it’s full bore and action-packed is something of an understatement. Its mix of future war, corporate greed on a massive scale, and the more personal story of one man against the system — in a kind of lone samurai way. A battle he can’t possibly win, but can’t back away from either.

Simon Furman has kindly shared with us some artwork of this project, along with the wording above and a press release, which you can check out after the break. Be sure also to check out the first episode, which will be going up on September 10 at www.to-the-death.com.

END_OF_DOCUMENT_TOKEN_TO_BE_REPLACED 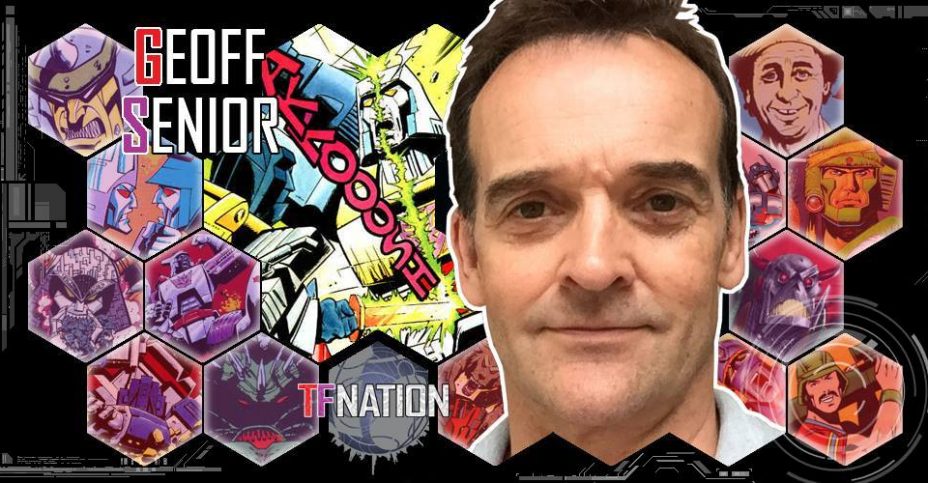 TFNation have announced another guest for TFNation 2016. Joining their debut 2016 show will be one of the most iconic artists of the Marvel era of Transformers, Geoff Senior!

Starting with the UK Transformers #42, Mr Senior has worked on Transformers for nearly three decades, with his work spanning not only the Marvel era of Transformers, but also contributing to the Titan Movie series comics and Regeneration One for IDW. One of his most enduring creations is the freelance peacekeeping agent, Death’s Head, who he created with Simon Furman.

2005 Boards member Josh has shared with us something really cool – the artwork for the Geoff Senior retailer incentive cover of the upcoming Transformers Regeneration 1 #81, which he colored! Geoff Senior for those not aware worked on the original Generation 1 book for Marvel UK and brought to life many memorable pieces of artwork for the series. This retailer incentive cover goes right back to the original Marvel run’s style with a big serving of nostalgia, resurrecting the classic retro style of the original comic series. Click the thumbnail at left to check it out. END_OF_DOCUMENT_TOKEN_TO_BE_REPLACED 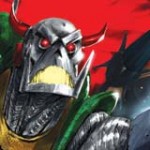 Another guest announcement comes your way from the team at Auto Assembly – today, Geoff Senior has been announced as attending the 2011 convention. The legendary artist who co-created Death’s Head (pictured left) with Simon Furman is making his return to Auto Assembly. Meet him and the other guests including David Kaye, Gregg Berger, David Wise, Nick Roche, James Roberts, Simon Furman, Andy Wildman and many more at the UK’s largest Transformers convention August 12 – 14 at the Holiday Inn Birmingham!

We have received more artwork by Geoff Senior to be used in the upcoming UK Transformers Comic by Titan Publications. This update includes a colored page from the upcoming UK title. Remember this UK Transformers Comic goes on sale on July 19th, for more information and subscription information head on over to the Titan website by clicking here. You can see the image and discuss this topic by clicking here.

Thanks to Ricky Claydon at Titan Publications for the news.

We have received more artwork by Geoff Senior to be used in the upcoming UK Transformers Comic by Titan Publications. There are two pages shown with pencils and then in inks. Remember this UK Transformers Comic goes on sale on July 19th, for more information and subscription information head on over to the Titan website by clicking here. You can see all of the images and join in on the discussion in our forums by clicking here.

Thanks to Ricky Claydon at Titan Publications for the news.

We have just received the first penciled page from the first issue of the new Transformers UK comic. This is Geoff Senior's first Transformers work since 1989. The first issue will be released on July 19th, and for more information you can head on over to the Titan site by clicking here. After checking out the Titan site you can head on into the TFW2005 forums to view the penciled page and discuss this topic by clicking here.