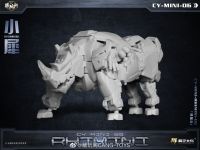 While Cang Toys is already working on their own Masterpiece scaled Predacons, they also revealed a new version for the Legends scale market. This take on G1 Tantrum brings us a very interesting design, stylized for sure but still recognizable as the classic G1 character. We have images showing the robot and beast mode, comparison shots next to CY-Mini-02 Landmini (Legends Scale G1 Tantrum) and pics of the combiner foot parts which can be used as a stand for his scale-partner CY-Mini-01 Firmament (Legends Scale G1 Divebomb).

Click on the bar to see the mirrored images on this news post and then sound off your impressions on the 2005 Board!

yeah he is looks cool, except those dick like thing hanging on his crotch

Well, at least Thorilla doesn't have his. Otherwise, that would create a lot of chaos for both him and Thunderking. The final design change for Thorilla did more wonders than before..

yeah he is looks cool, except those dick like thing hanging on his crotch

I have to say, I'm truly impressed on how these are turning out. Even if they are their miniature shrunken down counterparts of their MP selves. Can't wait to complete this set as well

This Predaking will dominate my S3 shelf. Firmini does all by himself as it is.

The arrow on his bot-mode crotch lol

Looks like his gorilla fists just rotate up onto his forearms

Thormini's looking good, there's a bit of me that will miss the silliness of the flying monkey, but it's good overall that they managed to get rid of the winged backpack. I wonder if there's a way to attach the combiner fists to the wrists to give him some kind of power gauntlets – even if there's nothing official, I hope there's a fan-mode way to do it.

What ? No gauntlet ? Boooo

Looks like his gorilla fists just rotate up onto his forearms

What ? No gauntlet ? Boooo

I love how these keep coming out looking so much better than the designs we were initially shown.

okay, enough with the teases and give us these already! it's been ages since we got firmini and in that span of time, i even picked up two!

King of Queens is a sitcom. Poster requested a reference to that. As desperate as he wanted one given to him by his community is as disappointed it is not only getting nothing, but also having to do it itself

These are the realities of the law in terms of the use of the right to trademarks.

…. beginning to think I'm not got to use this guy as a Predaking but instead Onyx Prime….