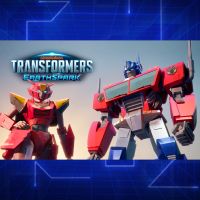 Thanks to 2005 Boards member Ratchet2007 for giving us the heads up that the first episode of the new Transformers EarthSpark cartoon is available online right now in the UK.

Transformers EarthSpark episode 1 (21 minutes) has just been uploaded via Nickelodeon UK YouTube channel. As you should imagine, the video is region locked and available only for UK viewers but it’s interesting to see how Nickelodeon is trying to promote the new Transformers cartoon.

Transformers EarthSpark will premiere this Novermber 11th via Paramount + in the US. If you live in the UK, you can watch the full episode after the break. Click on the discussion link below where you will also find a brief episode summary of the episode thank to 20005 Boards member Purple Heart (marked as spoilers of course).

I watched Eps 2-4 with my kid recently and continue my summary / review here:

I really like the show but honestly the only thing that bugs me is Prime's truck mode. It lacks a sun visor, and he looks naked.
View attachment 29719459 so I took the liberty of editing one on.
View attachment 29719460 Considering all other long nose truck Primss have one, this one stands out looking a bit odd.

Alright, Earthspark. You've got me wanting to know more about Dot and Megs' relationship.
He's the only character on the show to call her Dorothy.
Not even her own husband calls her that.

Seriously. What happened between these 2?
I NEED to know!

Also curious as to what Dr. Meridian and Alex worked together on in the past.

Overall, love the show.
Though there was one bit in episode 10 which elicited an audible "ugh. Really?"

I think I saw a theory somewhere that Dot was captured by the cons during the war, during that time her and Megs bonded, with that same theory they said that her prosthetic leg could have been what led Megatron to change, perhaps she lost her leg because of Starscream or someone.

My theory, I hope it's something like the Star Wars Rebels ep where Zeb and Calus are stranded, two enemies who are forced to work together and learn to care for one another. Perhaps Megs and Dot were in a situation like that and she saved his life and he saved hers. I do wonder if Megatron respects her for her military background as well, maybe this Megatron has some of his own?

Either way I love that they are exploring this, and that Dot clearly likes Megs more than she does OP, there's probably some story to that as well.

This is now a Earthspark Skywarp stan account. Best Skywarp this far.

Alright, Earthspark. You've got me wanting to know more about Dot and Megs' relationship.
He's the only character on the show to call her Dorothy.
Not even her own husband calls her that.

Seriously. What happened between these 2?
I NEED to know!

Also curious as to what Dr. Meridian and Alex worked together on in the past.

Overall, love the show.
Though there was one bit in episode 10 which elicited an audible "ugh. Really?"

Got through the third episode. Finding it really hard to watch. Twitch, Elita and Thrash's designs are really difficult to get used to. All of them have weird heads and I can't imagine them transforming.

whats the target audience for this one. I enjoyed TF : Prime. Is it in the same vibe?

Kids, and no in the sense of tone but I think the show is very enjoyable and has really cool action scenes.

I thought this show was pretty neat, I wonder when the rest of it is dropping

For those wondering where to watch this show, currently finished the first 2 episodes on Hurawatch. Quality and audio are good but recommend an adblocker.

whats the target audience for this one. I enjoyed TF : Prime. Is it in the same vibe?

So, the family and I sat down to watch this on Paramount+.

My son, who had just finished watching Spongebob, wasn't interested at all.

…until about 10 minutes in and laser-locked his eyes to the screen. We took breaks, but we ended up binging the entire 10-episode run (thus far, of course).

Pros:
-Sporadically, mind you, but a surprising amount of depth at times. (More than a puddle, but not thought-provoking, let's not lie about it. lol)
-Tries to be funny and sometimes sticks the landing. (We laughed more than once, and quite loud.)
-The animation, while not my visual style, is crisp and speedy with no jitters like some animation of the same type. (Spider-Man: Into The Spider-verse, anyone?)
-Megatron is Scottish, this time. (I approve!)
-The human kids aren't actually annoying this time.
-Alan Tudyk is really great for a funny, lighthearted Optimus Prime. (An absolute shame that Peter Cullen has become the grimdark Optimus Prime. =\ )
-G1 makes an appearance. (Yes! Really!)

Cons:
-Monumentally stupid at times.
-Tries to be funny and about 98-99% of the jokes aren't funny. (Absolutely cringeworthy at times. A lot of puns and dad jokes. Ugh.)
-It feels an awful lot like how Animated changed the visual game, this show is trying to do the same. (This feels like a run-of-the-mill Nickelodeon show. Take that as you will, I'm negative on that aspect.)
-You can't tell if is supposed to be in the G1 universe or its own. (And yes, you're absolutely confused because they reference and show G1 throughout the show.)
-If it *is* supposed to be in the G1 universe, then the gender-swapping feels unnecessary and (insert thing here I can't speak of because of the no politics rule). (If it's a new universe, then have at it!)

Final thoughts:
Surprisingly charming, overall, and sweet at times. Tries to be funny and generally falls flat on its face in that department but it has a lot of heart and keeps trying.
The characters aren't the horrible mess you'd think they'd be from the looks of them. Dr. Meridian/Mandroid actually *is* a legit threat, even as a human, I'm really impressed by that.
The adults of the show *are* the weak point. While the show is trying to deliver a message each episode, it gets annoying when you know the kids are right. (The parents are absolutely right, overall, and they only want the best for the kids (both the humans and the Terrans, since the Terrans

) The acting is a bit hammy, mainly from the human cast. I expect the Transformers to be at least slightly bombastic and they deliver it with successful style. (McCann as Megatron, especially.)
Optimus and GHOST (the human alliance) aren't actually right all the time, Megatron has legitimate points this time and you can tell it's going somewhere with this plotline.
The more sensitive among us will find a couple of things offensive to their sensibilities (can't go into that here), that's a heads-up, not a judgment.

I enjoyed it more than I thought I would, I liked the overall story and the characters. It's like…22 minutes without commercials and you could do a heck of a lot worse than this show. I'm pleasantly surprised by it. It gets better and better as the episodes go on.

Honestly I don't get this mentality, the whole point of fight scenes is they're sprinkled throughout the episode/season and move the story forward but also a cool spectacle.

The mentality is called "these scenes make the adult man forget for a second they're watching a show for kids". See also: G1 fans who pretend the G1 movie's bulk is the opening warzone scene.

There's 26 but there will be a break in between.

So are they doing what Netflix did on cuphead and splitting season 1 into 2 batches so that they pay the animation studio less?

Watched the first episode.
This is just my personal opinion:
The entire family were as annoying as the Bayverse Witwickys.
Elita was more like Chromia, personality wise.
Twitch and Thrash were okay.
I did like the different spin on Megatron.
Swindle and Hardtop were okay.
I heard Ghost, I immediately thought of Cemetary Wind ( ghost/cemetary).
The animation was similar to RiD2015.
Mandroid was both creepy and irritating.

I really want a toy of

. She has a really cool design.

I’m halfway through after watching the first 5 episodes, and loving every minute of it. The animation is solid, good story/lesson learned each episode, and hats off to the voice actors on some A+ performances. Megatron takes some getting used to, but I like the change and direction with him and hope that it sticks. Very proud to have this show join the pantheon of Transformers shows. Overall, good stuff all around

I will say for what it’s worth for those that did not like this opener. While I for the most part liked the first couple of episodes. I think the show gets better as it goes on (mainly episodes 8 and 9 I really liked)

Megatron was a chad imo.