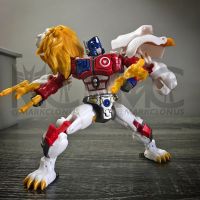 The Legacy Evolution behind the scenes looks continue! Hasbro Transformers designer Mark Maher is once again taking to his Instagram page tonight to share some details, this time on the upcoming Voyager Leo Prime (AKA Lio Convoy)!

“Legacy Evolution Voyager Leo Prime needs to be the king of your Legacy collection! Shu Umezu san just absolutely floored me with this absolute masterpiece of a figure. This guy jumped right out the Beast Wars II animated series and I really couldn’t be happier about it. ☺️
.
This guy has all the features you could ever dream of, his Evo-Fusion Lion claw technique is unmatched. He has his Lion Typhoon attack mode with the sweet Lio missiles and blasters that have all sorts of places to flex them. The missiles even have storage in the underside of the beast hide and can actually be used as a jetpack! All the stuff is blast effect compatible, the blasters that plug in on top can remain hidden under the mane inside the awesomely sculpted lion head. He has a flip open panel that reveals his Energon Matrix.
.
Articulation is out of this world, you even got some awesome range in beast mode!
.
I mean, cmon now people! The colors and actual spray op placement is marvelous.
.
Break out your Yuya san Skywarp to hitch a ride on this absolute beast of a figure. Name off the other characters you would like to see from this great Japanese series!
🦁”

Nah, I don't mod my figures.

Even if I wanted to, my hands are shaky as hell, so paint would probably end up everywhere BUT the eyes.

Some of my Override's red paint has chipped and so in addition to not knowing what type of red to use I'm afraid I'd get everywhere else.

Nah, I don't mod my figures.

Even if I wanted to, my hands are shaky as hell, so paint would probably end up everywhere BUT the eyes.

The only thing I'm still unsure about are the protruding teeth. I know what they were going for, but it just doesn't really work. It looks better when the mouth is open I've noticed, so it will probably be always like that on mine. That bot mode is all kinds of fantastic though, so it's probably going to stay like that for most of it's life.

Clearly he scanned a stuffed Lion on display at Museum than a living one.

But the anime had white eyes with black pupils. They’re probably the way they are for contrast, unfortunately.

Probably a combination of cost and appearances. How many people posted pictures of KD Tigatron and Dinobot figures with wonky eyes because of how the pupils were applied?

The beast head doesn’t look that bad from this angle…

People exaggerate how the lion head looks. Is fine, especially compared to how other feline BW updates look (he's perfectly in line with Cheetor who also has no pupils in cheetah mode).

But the anime had white eyes with black pupils. They’re probably the way they are for contrast, unfortunately.

They were probably made that way to look like the anime version in robot mode.

Someone put him alongside Kingdom Primal already!

(Although being seemingly as tall as the Earthrise Soundwave mould is a surprise. Might be taller than ideal).

I love they got Kaye for this.

Like when Family Guy got Welker for a Megs cutaway joke.

just give me a copy convoy and i'll be fine

Which reminds me we need a Panda Maximal.

Which reminds me we need a Panda Maximal.

Why Derp lion so derp ?