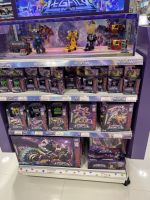 What I've always wished for. The dream is over folks. A Transformers city flowing of kegs & delivered by none other than Kegacy Motormaster.

Metroplex & Motormaster must not be stopped, no matter the cost.

I'll see myself out…

What a nice little Legacy display. I miss when stores like Walmart or Target would do that.
With that being said though, there\'s a lot to unpack here.

Hey i have a question where can i also put my international sighting?