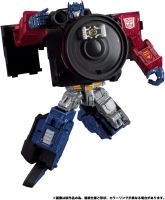 Thanks to TFW2005 user Ultraq we have a look at our first stock images of the new Canon x Transformers Optimus Prime Crossover figure.

On this new collaboration, Optimus Prime transforms into a realistic Canon EOS R5 camera. As we can see from the images, alt mode has been the priority here with Optimus robot mode torso formed by the central part of the camera. We can spot a Matrix Of Leadership inside the main lens/torso too.

We are yet to see an official announcement, but Takara Tomy Twitter have announced that new products will be revealed this August 10. One of the shadow images tweeted is clearly this new Optimus Prime toy and next to him we can see another shadow of a Reflector crossover toy.

Update: Amazon Japan have just updated a listing for this Canon Optimus Prime figure. It’s priced 17179 Yen which is $127.24 approximately. It’s scheduled for release by February 25, 2023.

Stay tuned with TFW2005 for more updates. Click on the bar to see all the new stock images attached to this news post and then join to the ongoing discussion on the 2005 Boards!