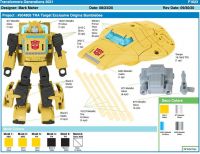 Hasbro Transformers designer Mark Maher has taken to his Instagram to share yet another behind the scenes look at a Transformers figure. This time the spotlight is on Origin Bumblebee:

“OH Origin Bumblebee! I was lucky to be gifted this project after Warden moved off the team.
.
First up is a glimpse of my deco layout for the pack. Doing deco, as I’ve mentioned, is an art in itself and for bigger more complicated projects, is quite challenging. The time consumption is definitely a labor of love! You will also see some inconsistencies in color for the blaster and the jetpack on deco and back of pack. Since those parts were made from PA plastic they wouldn’t take the painted silver ops. But some essential black peices were also in the mold so I couldnt make the mold silver.(Bummer)But I bumped up the color on the rods because it was really difficult to get the same glow as the golden rods that appeared on the episode. I went back and forth in production trying to add as much pearl fleck in the mold as possible to give them the cool looking shimmer.
.
The next drawing was done by @ken_christiansen_art (🤔) but I’m not certain as Warden kicked it off before me. The image to the right of it is Kunihiro san’s block model CAD drawing. I made some adjustments as I usually do, and we went back and forth on a couple different things.
.
I ended up cutting out the golden rod holder on the jetpack, it just compromised to much aesthetics for a nice looking jetpack. I also dipped back into episode 1 to really study this cybertronian BB here. The fun and somtimes difficult thing about old cell animated cartoons is the inconsistencies they contain. Im a stickler on head sculpts, so I really wanted to give BB the plump clean face he rocks in the episode, even if it is a lil on the thick side. Also got rid of the grid pattern he had on his cheeks which I think was a detail from the Siege series.
.
The rest of the images are more for all of you to weigh in on. I used to love to see my painted models on back of pack, but the digital renders are cool too, do yall have a preference?
.
Lastly, the instructions! Anyone have any feedback on those, layout? Colors? Helpful? Confusing? Better to have online transforming videos? Share your thoughts pwease ☺️”

JOHN WARDEN would have NEVER ended up cutting out the golden rod holder on the jetpack! Plus the SO CALLED \"rod holderless\" nice looking jetpack is a fu**ing BLACK (not SILVER) piece of JUNK.. And we now have an explanation for those FU**ING useless rods in the box!

Jaw dropped when I saw this was getting made. Bought 2. More please. There has to be Sunbow design for Optimus somewhere! Can we get a Sunbow \'Sentinel Prime\' too?

Ah right. So he can’t fly but the the toy doesn’t have wheels. I get it now

I still think he's a great little figure, and I'm glad I picked up a couple extra for customs (Glyph!) when Target clearanced them out. I don't mind the leg kibble or his big shell backpack, or even that he can barely pose with the energon rods.

My only real complaints are 1) he never got retooled into a Glyph, and b) now I want "MtMtE, p1" Cybertronian alt Wheeljack, Jazz, and Laserbeak even more.

I think he turned out very well, tho I will echo the criticisms of the rods and jet pack – did we need those? Extra guns would be better; I could use them on all those Legends/Deluxes with no weapons.

Mostly, I need a Wheeljack to pair him with!

This figure could have sold very well in a set of two!

Edit: I do like artwork on the back of packaging, but don't lose the renders – u need to see actual toy in both forms! Instructions: Excellent. White paper and nice use of yellow – the black instructions from previous releases, with gray on black printing… ow, my eyes!!! Origins Bee had easy to follow steps, and I very much appreciate the picture that shows where to peg guns/rocket pack!

They came really close to making a fantastic toy and then fell over into a pile of horse dung.

Seriously Energon Rods that were never a long running feature of the franchise that mostly Wheeljack and Bumblebee interact with and Bee can't even hold them ?

Also those huge lumps on the legs are just ugly, and the missing paint application that leaves the white paint showing isn't great either.

The Jetpack was completely pointless & the money would have been better spent on pinned opening hands that can hold the rods.

The tiny dangerous and asking to break hook tab on the back of the vehicle mode is made of the stupids and a good example of the sort of bad design that Hasbro needs to beat out of Takara's designer's heads.

On a positive note I like that you can adjust his height, and I like that he retains "some" 5mm compatibility – his pistol is also "nice" – maybe they could repaint him as (blue) Glyph and give them grey or silver legs and a grey or silver jetpack (so Bee can have the proper colour one) as I thing the mould is quite friendly to being a fembot – at least compared to the normal Netflix one. a "G2 Gold Bumblebee" version might work decently too – just as the colours would suit him.

So it's typical – a good toy that "should" have been better if the people working on it cared a bit more.

Earthmode Bumblebee likes that the jetpack fits him so perfectly, and Origins Bee likes that he can wield Earthmode Bee's bazooka the way God intended bazookas to be wielded. Am curious if those rods will fit into the old Generation’s clip system clips, or into the hands of a Lego/Mega Construx fig?

Who’s hands could be popped out and the wrist pegs could fit in some little holes, or pre-drilled holes on the side of something that bee/wheeljack could wear on their backs.

Edit: Nm just tried with Mega Construx , rod’s too thicc. The clips to those Constructbots looks like they would work since the areas they clip onto seem about the same size.
View attachment 29596548

While the cliffjumper mold is good i can say that bee\'s version was underwhelming alt mode aside i prefer origin bee because his headsculpt captures the character better compared to netflix bee\'s headsulpt which makes him look lifeless (It was better on bugbite for that reason though) even the yellow color used was better i see netflix bee and see more yellow-orange rather than lemony-yellow origins has.

You are all great folks. The energon rods are to be held in the arms. Bend the arms as if he is hugging them. Exactly the way he holds them in the source media.

I get the logic for removing the rod holders, but man did it negatively affect playability. Those rods are just useless junk I have a in a box somewhere.

I gave mine to MP Wheeljack. If I clump enough in his hands, he holds them well enough.

Why does he need a jet pack when he turns into a flying car?

1) I thought he had wheels in the cartoon?
2) It might just be a hovercraft rather than a flying car.

Is it actually fun to transform? I've passed on him several times due to both size and what looks like an annoying amount of shellforming.

I think he's a lot of fun; the only troublesome point is remembering to hinge his leg kibble in the right order, but I find unfolding his legs and seating everything into saucer mode to be quite satisfying.

Fun transformation, cool as hell alt mode, lots of accessories (even if most of them are unfortunately useless; I appreciate the effort). At least, that's why I like him. But I'm not a toon-accuracy guy, really.

Is it actually fun to transform? I've passed on him several times due to both size and what looks like an annoying amount of shellforming.

All mold 3 parts will darken.
My figures are kept at 70f
Year round

So at first I thought I understood why they cut the energon rod storage gimmick, because I wouldn't have wanted those grooves molded onto Bee's back / the hood of the alt mode… but then I reread it / looked closer and realized that was supposed to be a feature of the removable jetpack, and was only cut to improve the aesthetics of that jetpack. And that swings me over to the side of not liking that decision, because a weird-looking jetpack would be a small price to pay for the rods being even vaguely useful.

(Although really… even then we'd have all been like, "What is this, this looks like crap, we're never displaying this toy this way." We wouldn't know about the alternate universe where the rods were totally useless. And I say that despite kinda liking that they included the rods!)

This is just a fun figure. The silly fact that he has VW Bug details in robot mode just like in the cartoon gives me such "work of passion" vibes. Glad I have him.

likely a reason I didn\'t by that figure. Too much kibble, me no like!

There's really not that much kibble. Just the backpack (which ends up very close to his back to not be an issue) and the legs. It looks much cleaner in person. Plus, how were they really gonna engineer such a small figure without having some margin of kibble? Not really possible bruh

Manags to get the last one on BBTS