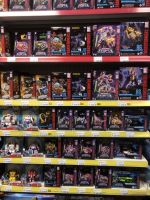 Good news for fellow fans and collectors in the UK. We can report that the new Legacy Wave 2 Deluxe Elita-1, Knock-Out, Tarantulas and Wild Rider have been found at Watford Smyths. At the same store, Velocitron Cosmos, Override and Hauler were available too.

To top it all, the new Legacy Core G2 Megatron, Shockwave and Optimus Prime (re-release) were spotted at Hastings Toymaster. Also, we can also spot Studio Series SS-87 DOTM Bumblebee from Studio Series Wave 17 Deluxe. We had previously reported SS-88 ROTF Sideways which means only SS 86-16 Arcee is missing from this wave.

ooh this might mean the US will be getting them next!

As said above. this is because really there are very limited destinations in the UK (and Ireland) for toys – we don't have department stores on the same scale as the US, and any non-specialised shops (Tesco/ASDA/Dunnes) might at best have some LEGO with a focus on toys for kids below 6.

Smyths is effectively like the Irish Toys'R'Us, sompletely devoted to selling toys (and games), and has since expanded into the UK and mainland Europe. In the UK you have a few other options (Entertainer, Toymaster), but Ireland only really has Smyths and a handful of independent shops, as well as some Toymasters that – for some reason – still have PWT figures (nothing worthwhile though)

It means that our shevels look packed, but outside of Dublin, our capital, we're usually up to an hour away from our nearest source of figures. Also means shelf time (and what dictates a shelfwarmer) is far more broad over here – I was able to get NF Bumblebee and Soundwave while I think wave 2 or 3 of Kingdom was on shelves.

Just found some of the Velocitron figures at the Walmart I work at here in Mass. picked up the one Roadhauler that was left on the shelf also have 1 override left and some Blurrs, Roadrockets, and Burn Outs as well as some Legacy wave 1s

ooh this might mean the US will be getting them next!

Old news, these were available a week ago

and they still are. It only took a week to report the story.

Old news, these were available a week ago

Smyths is the only UK shop that looks like this and many of us have to travel far to get them.

There'a two other UK toychains, Toymaster (a loose confederation of shops) and The Entertainer both have "varying" levels of stock

Supermarkets have abandoned Transformers and most other Hasbro boys toy lines

It's important to point out that SO FAR just solid cases of Cosmos have been seen for the deluxe: None of the other 4 (Road Rocket, Burnout, Blurr & Clampdown) have yet been found though that may change very shortly

My Walmart has 2 Coronation Starscreams in various states of "crushed to hell" and a headless Bulkhead, what they lack in selection they make up for in aesthetic.