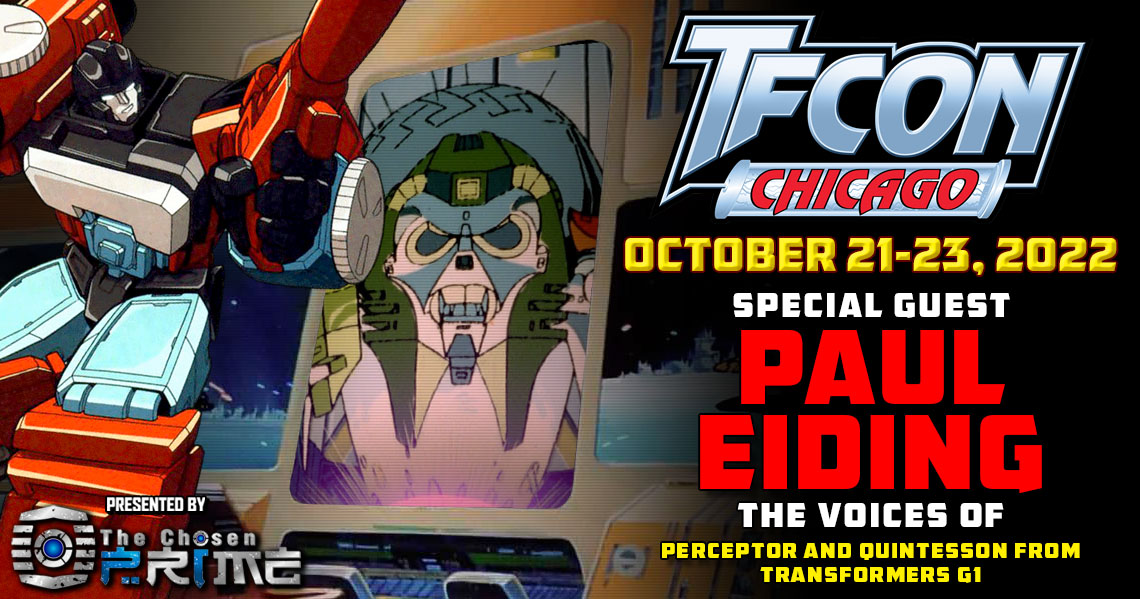 TFcon is very happy to welcome Paul Eiding the voices of Perceptor and Quintesson in Transformers Generation 1 to TFcon Chicago 2022. He is also well known as Colonel Roy Campbell in the Metal Gear Solid video game franchise.

Paul will be taking part in Q&A panels and autograph sessions with the attendees of America’s Largest Fan-Run Transformers Convention. Paul Eiding is presented by The Chosen Prime.

Tickets are available at https://www.tfcon.com

I think the only thing I missed was an Action Toys Machine Robo prototype presence at the con. Not sure what that means for the line.

Good to hear people had a real blast. Thanks for sharing.

Goes to show a TF convention (not limited to TFCon) doesn't need to be official with Hasbro for it to be a great event.

It was great drinking with you at CaddyShack man! Overall incredible weekend

It was great meeting you as well and thank you for stopping by our dealer table. I had a blast and it was actually nice putting some faces to the names on these forums.

Anyone have pics of the costumes?

This was a great show! Foot traffic was insane. I could barely get away from our table. I was helping out Artfire all weekend. Anyways, here are a couple photos and a couple of our table:

It was great drinking with you at CaddyShack man! Overall incredible weekend

Had an awesome time!!! Wish I'd got more pictures, but I was just so caught up in everything. Got to meet David Kaye and have him sign my original boxed Transmetal 1 Megatron! Also Jim Sorenson, great guy, really cool meeting them both.

And I got third party Unicron!!! Oh and a bunch of othet stuff!

I'm back & while it had it's good & bad moments, TFCON Chicago 2022 was an out of this world experience I will never forget!

View attachment 29690809
Friday night featured many firsts for me. It started with (1) hooking up with a group of fellow TFW2005 members my age & (2) being introduced to room sales. It was exciting running around the hotel to many awesome lots of Transformers for sale the night before the dealer room opened. Next was (3) diving into collecting legends class movieverse figures. Many of those tiny, mostly decent figures of the live-action movie cast & then some were at this convention & I ended up getting 16 of them for approx. $74.50, including some multi packs MISB! (4) My new friends & I enjoyed the rest of Friday night opening & showing our first hauls & (5) eating some hype-worthy Chicago deep dish pizza (certainly ordering next time I visit)!
View attachment 29690810
Saturday's dealer room line was endless & the room itself was very crowded for it's small size. Was too preoccupied to see most of the panels & am hoping David Kaye's & Aaron Archer's are uploaded on video soon. Did get another decent haul at both dealer room & more door sales though, including a trio of Cyberverse Gnaws (less than 15 each MISC).
View attachment 29690812
One of them joined me on a ride to a classic diner; couldn't get enough of that spin-punch gimmick, lol.
View attachment 29690811
Sunday saw me saying farewell to my new friends until next time, excavating bins for legends until the dealer room closed, & sharing hauls & long discussions with the remaining fans in the lobby until midnight. Spent most of the AM after making my total haul group shots in my room. Amassed a great haul which included figures for completing some sets, replacements for incomplete/worn figures from my childhood, that legends class horde, & a few newer ones I regretted passing on at retail!
View attachment 29690813

View attachment 29690863
But the best part of this convention by far was being surrounded by my fellow Transformers fans for the first time. I knew very few TF collectors before I came to this con, & met & talked to some even less, but here was where I found my Transformers family in the friends I joined this last weekend. In fact everyone I talked to, showed figures to, & joined wherever they went were all nice people, mostly my generation, who shared my love for Transformers, & that was what I was looking forward to most. To those on & off this site that I met, especially the group of TFW2005 members that I will certainly be keeping in touch with (a few of which are from my home state), thank you for making this one of the best moments of my life. I might just make my first cross-country trek to TFCON in Toronto next year to do this again as soon as possible. Until next time, 'Til all are one!
= )

This was my first Transformers convention and it was a blast. I've gone to the Kane County Toy show for years and even been a dealer there 15 years ago, and the foot traffic at TFCon2022 was busier and even more insane. The dealer room was literally shoulder to shoulder on Saturday for hours. Yes, the Optimus Prime cab was in the back off the main road, in fact if we walked in the way we came we would never have known it was there.

I definitely spent way too much, but had a great time, it was a tight fit but managed to get everything into the trunk!
View attachment 29689224

The main thing on my list was FT-20. I saw the open one at the Toy Dojo booth and was seriously considering it, but then TCP had one with box and everything on Sunday morning and I immediately grabbed it. Shout out to Erik from TCP, it was his personal copy and I'm very happy to take good care of it!

I also grabbed a bunch of older generations figures including Thunderwing and Darkmount from the guys on the back wall. I'm looking forward to spending some time going through everything.

Haha, we drove, but have already hit the tarmac about half an hour ago. If we had fewer obligations we'd have stopped by.

Hope everyone had a blast! My table was more successful than I expected, and the live script reading was as fantastic as ever. If anybody was passing thru the artist alley, I was the lemon table with the matching dress! I've learned a lot from my first tabling and I'm looking forward to trying to make the LA event.

Supposedly an Orlando event was announced for summer '23 at the end of the event staff QnA. Anybody got something they're particular proud of/happy with?

Orlando is next October…. Already planning my trip

As far as cool pick ups, Scored a MIB Caldius ( Lost Light Rodimus) for 80. Vexo Prominon for 120, and a MOSC Animated Rodimus for 35…. Among other things.

Such a great weekend. Went to both TFCon and Pinball Expo on Saturday. Picked up the Ocular Max Tempo figure.

The last TFCon I was able to walk right into the dealer room, this year was packed and had to wait 40 minutes to get in. But it was great to see so much enthusiasm. Also the staff organizing the line were really nice during the wait. Definitely going to the next one

Loved this con, plan on going to next year's for sure.

This little guy gave me an intense love for Iron Factory and that scale of toys. So much character and articulation! View attachment 29688848

Of all my TFCon's I've been to I've never seen so many attendees, this has got to to be one for the record books. Congratulations @Super_Megatron

On Saturday David Kaye's autograph line was from his booth to the wall ALL day. Let's see those autographs!

The official "Show Off Your Autograph Collection" thread

Is anyone who was crazy enough to drive to the con still here and not leaving until tomorrow? Feel up for grabbing a drink or two?

Haha, we drove, but have already hit the tarmac about half an hour ago. If we had fewer obligations we'd have stopped by.

Hope everyone had a blast! My table was more successful than I expected, and the live script reading was as fantastic as ever. If anybody was passing thru the artist alley, I was the lemon table with the matching dress! I've learned a lot from my first tabling and I'm looking forward to trying to make the LA event.

Supposedly an Orlando event was announced for summer '23 at the end of the event staff QnA. Anybody got something they're particular proud of/happy with?

Is anyone who was crazy enough to drive to the con still here and not leaving until tomorrow? Feel up for grabbing a drink or two?

Park is free at the mall but I found a more secure garage for $15. I got a decent haul including delta. Most crowded I remember seeing tfcon.

The garage behind the Embassy Suits had a section for the convention hall across the street. I suspect that's the one you were in. It was virtually empty for the time I was in it yesterday. Fifteen bucks was much better than the thirty one the other half of the same garage was charging.

And, yes, there were far too many people for that space.

Room sales going on still during the day today?