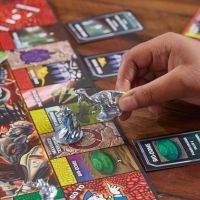 We learned about this Beast Wars themed board game some days ago via a listing in an Australian website, and now we have several new stock images which give us a better look a the board, tokens, cards and other pieces of the game. 14 tokens are included in both robot and beast mode: Optimus Primal, Rattrap, Cheetor, Megatron, Blackarachnia, Waspinator and Dinobot. It’s  good to notice that the game cards feature instructions and rules for Maximal and Predacon characters.

This new Monopoly is listed for $69.00 CAD which is about $54.00 USD. We still have no concrete information of a US release, but we hope it will be announced soon. See the new images after the jump and share your impressions on the 2005 Boards!

There are 17 stasis pods. Just two off from the amount you can count in the first episode when they’re launched.

…not going to lie I wish there were like a lot more stasis pods in the game.

Just got in my set from entertainment earth. Nice embossed cover you can feel the dinosaur scales on the cover

It's up at bbts as well.

Any idea where we can buy this in The US?

Any idea where we can buy this in The US?

(late to the party) Wait, this is ACTUALLY a thing?! OMG!
(starts searching canadian amazon)

Two more images showing off the board and Beast Mode tokens, once again thanks to Banon Hannifey at the Beast Wars Fans Forever FB group.

BTW the same applies to Megatron (look at the t-rex hand in bot mode) and even BA (her head is more squished like the MP).
Considering the lines on Primal's calf, it may be the same for him and Cheetor as well at this point.

I would love an MP Waspinator. It’d be the only MP I’d probably buy.

Link to the source? Thanks!

Woah, even if not perfect, it seems like they tried to keep the pieces in scale! I absolutely love this, I'll have to get one copy for myself

It’s Maximals vs. Predacons in a battle for the Golden Disk! The Monopoly: Transformers Beast Wars Edition board game for kids ages 8 and up is a must for Transformers fans. This 2-6 player game features gameplay inspired by the Transformers universe and iconic Transformers artwork.

Race to take control of key locations and powerful spaceships, obtain Stasis Pods, and wield the Golden Disk! Properties include Bio-Dome, The Ark, and Floating Mountain, and instead of houses and hotels, this edition features Energon cubes and Energon crystals. The player with the most Energon wins the game!

In 1996 the Transformers franchise introduced Beast Wars: Transformers, a new series and toyline that expanded the Transformers universe forever. Beast Wars brought fans Transformers robots that turned into beasts. It introduced the distant descendants of the Autobots and Decepticons, the heroic Maximals and evil Predacons, and immortalized their leaders: Optimus Primal and Megatron, new characters with famous namesakes.

The beloved beasts are back, brimming with 90s nostalgia, and ready to introduce new fans to this exciting twist on classic Transformers robots!

Brought to you by Popcultcha, Australia's largest and most comprehensive Board Game online store. Click here to see the full range of our merchandise.

What the heck is this!?

This has to be one of the coolest versions of Monopoly I've seen in a while, I really dig all the custom pieces they made for it.

Definitely gonna pick this one up for my TF board game collection. All dat toy art.

As someone that has unintentionally started a Monopoly collection this looks awesome. My favorite franchise, my favorite series from said franchise and my favorite boardgame, yes please thank you I\'ll take 1 million.

This is the first time I’ve ever heard the name Grid Trion. Where did it come from?

*oh, nevermind. It was the coordinates.