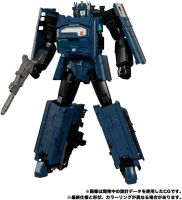 Via Amazon.jp we can share a new set of stock images of the upcoming Takara Tomy Transformers MPG-02 Masterpiece Trainbot Getsuei.

These are big and clear images of Getsuei who is the second figure of the G1 Japan Trainbot team following Shouki. We have several shots in robot mode showing his poseability, extra parts (rails, gun and blasters) combiner Raiden leg mode and the realistic EF65-1000 Electric Locomotive which even has all the electric attachments on the roof. According to a recent Takara Tomy Transformers tweet, pre-orders for Getsuei will start on January 13th in a few hours. We may have additional information and images soon.

Update: Pre-orders are up via Takara Tomy Mall and Amazon Japan for 17600 Yen ($153.58 approximately). Expected for release in late September 2022.

See the new images after the jump and then click on the discussion link below and let us know what you think about the next Masterpiece MPG Trainbot.

IIRC, they gave us an huge hint in the Generation MOOK manga about the comparison btw normal character and combiner

I meant somebody in China getting their copy with their 3/6 Raiden, it's only a matter of time

I'm sure we'll see some pictures of the minifigs next to a partial-Raiden skeleton for scale soon.

IIRC, they gave us an huge hint in the Generation MOOK manga about the comparison btw normal character and combiner

It's a shame they had to fold up so much train in Yukikaze's legs, he looks amazing to me anyway. That silvery chrome is a real nice touch that shows up in combined mode.

This makes me think: I wonder if Kaen might come with 1 or 2 (or more?) minifigures for scale with Raiden. Kaen’s train is the smallest of the group, perhaps TT might throw in some extras, like minifigures, to fill out the release.?.

I'm sure we'll see some pictures of the minifigs next to a partial-Raiden skeleton for scale soon.

Yep! on top of that, one of the most important episode with combiners/normal characters interaction can be recreated: 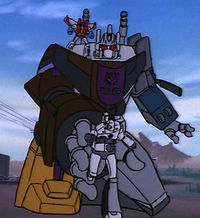 I'm posing these little bots next to Raiden in train mode!

If they would have been able to get that figure a lot closer to that sketch I would be way more excited for it. Still getting the trainbots, but I wish they were closer in look and features to the regular MP line. The lack of extra faces in particular is really bugging me. Especially for Raiden. They should have at least given Raiden an opening mouth. If MPM-5 or MP-41 can have an opening mouth, why not Raiden? His head is much larger. I'm not sure but I don't think Raiden can look up or down much either. In my opinion it's critical for a large bot to be able to look down at the smaller bots. I still feel like MPG is being worked on by the backup MP design team. My opinion!

I agree to an extent. Thing is, I adore diaclone style and toon style so whatever way they go I'm happy. I doubt we'll get many more headmaster characters in MP so Raiden can exist in a vacuum and I'm fine, but boy imagine a full toon raiden from TT. MS would be in the bin

The JNR logo is present on the physical prototype but absent from the CG images.

My thought that Getsuei looked like a train driver with his head design lol.

I think a lot of it is the wow factor because of the size. I have Gabriel think I've transfomed him twice in3or 4 yeas. therest of thetimes he sits in a corner, unless I move him when I mop the floor.

Damn, he’s plenty big! Can’t believe some folks would want something even bigger. The larger a figure gets the less fun and more of a chore it becomes to handle.

It's readily apparent when people don't "handle" their toys and merely let them collect dust at the back of a shelf.