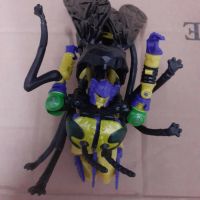 Currently making the rounds on the net is a photo of what seems to be a new Beast Wars Buzzsaw figure.

As with the original it is a reuse of the (Kingdom) Waspinator mold with a new head sculpt – that of the “normal” robot head rather than the mutant one. The image shows him only in robot mode, and he is quite mistransformed to boot, although he overall appears to be very accurate to the aforementioned original figure.

As stated we still have no official word on this photo’s legitimacy, nor how it will be released if it is in fact real, so we advise taking it as a rumor until then.

Oh, he has a Predacon logo on his shoulder!

I'm glad that most BW toys have their respective symbols nowadays (Aside from Grimlock and T-Wrecks for some reason).

Debating whether or not I'll go for this. I technically own three Waspinator molds already (the original in the Fox Kids colors, displayed with the "normal" robot head, the T30 mold five times over accounting for the original and the Waruders, plus the little Targetmaster Waspinators they come with so I got four of those) so honestly at this point I might as well sate whatever beast compels me to keep buying Waspinator molds.

So would it be called the "Future Beast Wars Toys Speculation Thread"? I'm being serious here. If you're starting a new thread I'd like to know what you'll call it.

Already did. Not sure if it was the best title but tried to work around it to not make it redundant.

I'm actually willing to open a new discussion thread for future Beast Wars figures if this lets us ignore some people.