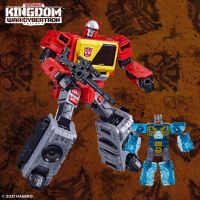 Things are ramping up over here on Transformers! We missed #TransformersTuesday, so Transformers THURSDAY it is! Check out the last 3 toy reveals for War for Cybertron: Kingdom – Deluxe Autobot Slammer, Deluxe Autobot Pipes, and Voyager Autobot Blaster and Autobot Eject. All figures COMING SOON to retail, so keep your (eyes emoji) peeled.
#TRANSFORMERS #MTMTE #WFC #KINGDOM
Autobot Pipes is a partial tool of Huffer and is based on his G1 animation appearance featuring all-new head, waist, chest, tires, forearms, shoulders, and accessories. This figure converts to mini truck mode and comes with 2 pipe blaster accessories and a newly tooled cartoon-accurate head. The back cab even allows you to show off his Autobot emblem.
Autobot Slammer is a heavy partial of Ironworks, featuring 5 new tools! This figure is based off the original 1986 Slammer toy that came with G1 Metroplex and converts to his classic tank mode. Autobot Slammer is also a weaponizer! Break the figure apart to equip other figures with missile launcher, chainsaw, and turret blaster accessories.
Autobot Blaster is inspired by his animated appearance in the G1 series and comes with his cassette tape, Autobot Eject. Autobot Blaster converts to boombox mode. The figure features detailed sculpt on the speakers, mini jetpack sculpt on its back, and side-to-side articulation on the front shin speakers. The Autobot Blaster figure’s finger is extended to press his spring-loaded eject button and automatically pop open his tape deck! Autobot Blaster comes with his classic electro scrambler blaster that Autobot Eject can hold.

See all the mirrored images after the jump and then share your impressions on the 2005 Boards!

Rick Astley Never Gonna Give You Up
View attachment 29450924

Well my son is really happy with his Kingdom Blaster. We finally found him at a Target recently.

Has Blaster been at all available on amazon.com?

This toy would also make for a pretty decent G1 Mainframe, you can even do a lime-and-blue cassette for his partner Push-Button.

I think a redeco'd Kingdom Teletraan-1 would make the perfect Mainframe.

On sale now at amiami and the rest of the JP online (heck, if amazon won't sell him and ebay is scalping him x2) and can't find him at the local TRU………..

He sold out again on Hasbro Pulse.

I'd rather Dr. Wu and other 3rd-party companies concentrate more on mini-cassette bots that HasTak is unlikely to make, like Flip Sides and Rosanna. That being said, their WfC-compatible Chatter (Beastbox and Squawktalk) were released in the classic G1 colors set, Shattered Glass colors set, and black "stealth" set. So if they did Flip Sides and/or Rosanna, they could similarly release them in Eject and Rewind variant colors.

If we're very lucky, we'll start seeing the basic mini-cassettes start coming out from Hasbro as Legacy and SS86 core class figures, like they're doing with SS86 Rumble in the fall SS wave -and- companies like Dr. Wu will pick up the slack with the less well-known figures, like their upcoming Slamdance and others such as Decibel, Legout, Stinger, Nightstalker, Overkill, Slugfest, etc. It boggles my mind that Hasbro still shows no signs of going for the easy money with Selects 2-packs and 4-packs of mini-cassettes based on the simple color redecos. Hopefully in there somewhere we'll get a better G1 Ravage mold and a G1 Buzzsaw.

Blaster, Eject, or both?

It's both. The handle on Blaster's gun fits the ports on both figures' arms with no resistance or issue. In the photos I shared in another thread (it's linked in here on the last page or the one before that) I show off Eject hanging off of Blaster's gun. Laughably, inserting a massive (by comparison) 5mm peg into a tiny figure doesn't cause stress marks but just transforming and posing the little turd does. Go figure. =\

I just mean a straight-up KO in different colors of plastic, not a 3P version. There have been upscaled Siege KOs going for about 50-75% of the retail price, there's no reason to think recolored 1:1 KOs of the cassettes would be that expensive.