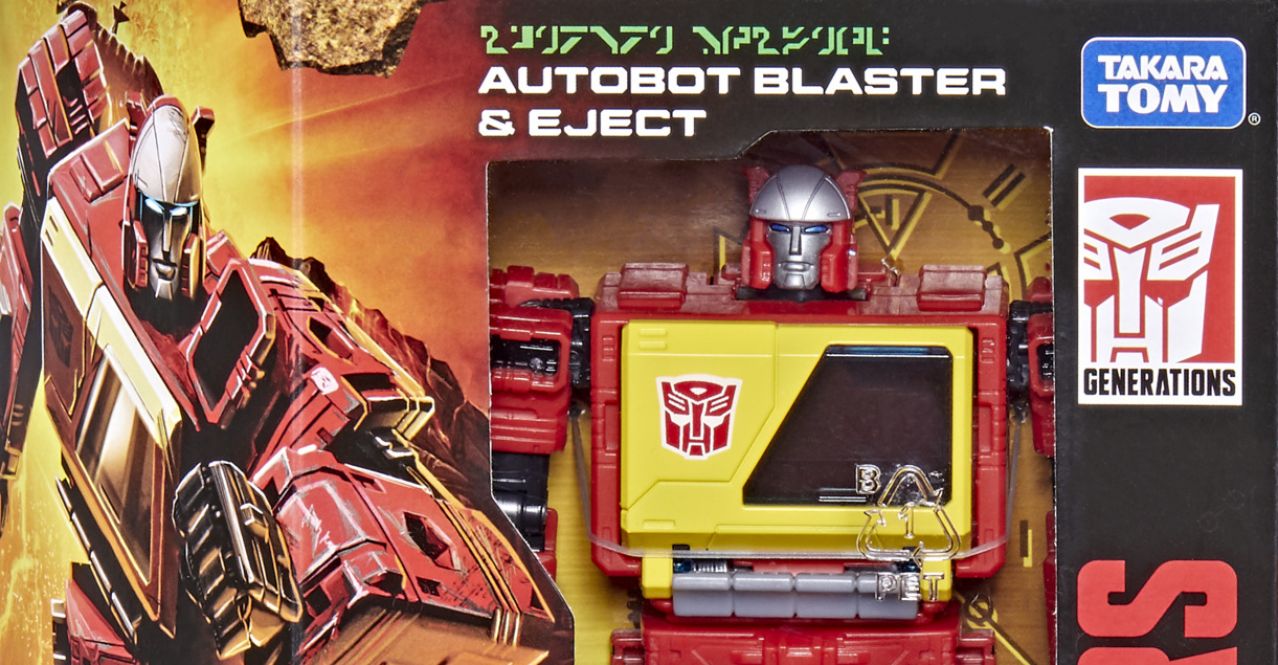 TFW2005 just had a nice roundtable with the Transformers brand team and a wide selection of other fans.  There were lots of new info and tidbits to share, and we will in a bit.  Near the end, they were kind enough to share our first look at Kingdom Voyager Blaster.  He will be part of Kingdom Wave 5 which will not be pre-ordered, but go live on shelf 1/1/2022.  Stay tuned for more details on that.   You can check the early Blaster shots after the break, and then check back later for our notes recap.

Update: Quick notes on today’s panel after the break!

Update 2: Official pics of Blaster and his product info has been added.

War for Cybertron: Kingdom Voyager WFC-K44 Autobot Blaster & Eject stands at 7 inches and is G1-inspired. The Autobot Blaster figure converts into classic G1-inspired radio mode in 20 steps and comes with a blaster accessory. Eject figure converts from robot to cassette mode in 8 steps and fits inside the Autobot Blaster figure’s chest. The figure includes a Golden Disk card that reveals a possible destiny of a key character. Collect other Kingdom figures to reveal all 3 alternate destiny variants for each character! (Each sold separately. Subject to availability.)

With the ancient and highly advanced F.O.S.S.I.L. (Fossilized Osteo-Skeletal Shield Integration Loadout) technology, Fossilizer bots, infused with primordial energy, break apart to weaponize their allies. Use Deluxe Fossilizer figures to beastify the Autobot Blaster figure with bone armor! (Sold separately, subject to availability.) Beastify the battlefield! Worlds collide when the Maximals and Predacons join the fight, coming together with the Autobots and Decepticons in an epic battle that will alter their destiny forever. Primal power floods the battlefield as the fierce beast modes of the Maximals and Predacons are unleashed!

Below are very short notes from the Transformers Brand Team roundtable today. This is ALL PARAPHRASED, jotted down quickly during the event. We will review the audio and refine later today.

Brian K – Combiners, Scramble City style in new line?  Make your own – not the case here. Specific combiner is the end goal.

Jeremy D – Galvatron – Whats up with Extra Unicron parts not being part of the Haslab? Wanted to give some more accessories, combine with a fig to make worth it like the Sentinel drone.

Greg K – Plan to do box sets on Combiners? Mark will like to do it, no plans right now, stay tuned.

Rodimus Primal – Studio Series 86 – Rest of Dinobots, other deep roster characters etc? – No intention to end either 86 or SS as a whole. Thunderwing, Bludgeon, etc – On the list, would like to do.

DJ P & son (young son asked question) – Blaster tease – is Soundwave coming? Would you like at Voyager scale? Might have to draw that up….

BaCon – Will we see other characters in Legacy poster in the line? Breadcrumbs…. smiles.

TFW2005 – Combiner Wars tech, will it work with new Legacy style? May work, but not the focus. Menasor will be Menasor first, not compromise for compatibility. Think more Constructicons and Devastator.

Vangelus – Generations Selects – will it get more niche now that Legacy is multiverse?  Will dip into a wider pool across lines.

Anthony K – How to keep a unified theme when line is multiversal. – Balance. Difficult, working hard to figure it out.

Anthony TFU – Weaponizer types – continuing? Can’t be specific – what’s next is nuts. Would like to continue the ability of fans to do custom builds.

Matt T – Star Saber, – plans to add in more Japanese characters on the table? – Umbrella is expanding, can’t be specific. We are aware of those characters (smiles).

Matt G – Armada 20th in Legacy? They were aware of anniversary, team was excited for it. If they were to do multiverse and not represent Armada, would be blasphemy.

Ben Y – Should we expect non G1 characters to be redone like Bulkhead going forward? Goal is to keep look same across the line. Some won’t get as extreme as Bulkhead, just want the shelves to blend well. Ever evolving. Will listen to feedback.

Ben Y – Early Studio Series expensive, any chance at getting older Voyager/Leader figures back out? Anything is on the table.

Brett S – Legacy launch, what went into the overall idea and theme? A lot was seeded by Warden and then Lenny. Prowl into Barricade lit a match on what could be done with Legacy.

Brett S – While looking for stuff to add, anything giving pause on how to do it? Yes, but they will do it and figure it out if it works with the line.

Matt T – Human characters with leaders beyond SS86? On the table. They are technically accessories, so need to balance what accessories best fit with the figure.

Anthony TFU – Is Legacy a trilogy or just single? Is BW involved in Legacy? – Everything fits, would be a shame to abandon Beasts now. (No clear answer on Trilogy)

Anthony K – How does Rise of The Beasts affect Generations? Developed independently, but they are aware of each other. Won’t not do something in one because of the other if it works.

Vangelus – Very Vangelus question and commentary on wanting a deeper BTS of figures not tied to whatever is being revealed as new now during livestreams.  Will keep in mind. Regular updates on Star Saber coming.

TFW2005 – Quick commentary about the Laser Prime repaint better come correct, just so they know this is serious business (in jest).  Titans – more coming? – Not sure where titans ending rumor came from, but no plans to stop.

BaCon – Toy Fair, SDCC, Event plans? – no plans yet, want to be present whenever and wherever they can based on current situations.

West K – Celebration packs for the WFC Trilogy like Prime Wars? Last ones were great. Can’t say what’s in pipeline. Happy to look back, will watch what people are asking for.

Brian K – Why didn’t Cybertron Bee shown up in Siege? – Not 100% sure, asked if we’d like more origin looks/styles, all were a yes.

Kingdom Wave 5 – 1/1/22 – on shelf only, no preorders. Eject is energon infused, clear plastic.  Will be mainline, mass release, and online retailers will have them.  Probably not via long range pre-orders tho.  More details soon.

That’s about it.  We’d like to thank the Transformers Brand Team and the PR reps for setting it up and having us today!

Stay tuned for some refined notes on the above Q/A session.

Rick Astley Never Gonna Give You Up
View attachment 29450924

Well my son is really happy with his Kingdom Blaster. We finally found him at a Target recently.

Has Blaster been at all available on amazon.com?

This toy would also make for a pretty decent G1 Mainframe, you can even do a lime-and-blue cassette for his partner Push-Button.

I think a redeco'd Kingdom Teletraan-1 would make the perfect Mainframe.

On sale now at amiami and the rest of the JP online (heck, if amazon won't sell him and ebay is scalping him x2) and can't find him at the local TRU………..

He sold out again on Hasbro Pulse.

I'd rather Dr. Wu and other 3rd-party companies concentrate more on mini-cassette bots that HasTak is unlikely to make, like Flip Sides and Rosanna. That being said, their WfC-compatible Chatter (Beastbox and Squawktalk) were released in the classic G1 colors set, Shattered Glass colors set, and black "stealth" set. So if they did Flip Sides and/or Rosanna, they could similarly release them in Eject and Rewind variant colors.

If we're very lucky, we'll start seeing the basic mini-cassettes start coming out from Hasbro as Legacy and SS86 core class figures, like they're doing with SS86 Rumble in the fall SS wave -and- companies like Dr. Wu will pick up the slack with the less well-known figures, like their upcoming Slamdance and others such as Decibel, Legout, Stinger, Nightstalker, Overkill, Slugfest, etc. It boggles my mind that Hasbro still shows no signs of going for the easy money with Selects 2-packs and 4-packs of mini-cassettes based on the simple color redecos. Hopefully in there somewhere we'll get a better G1 Ravage mold and a G1 Buzzsaw.

Blaster, Eject, or both?

It's both. The handle on Blaster's gun fits the ports on both figures' arms with no resistance or issue. In the photos I shared in another thread (it's linked in here on the last page or the one before that) I show off Eject hanging off of Blaster's gun. Laughably, inserting a massive (by comparison) 5mm peg into a tiny figure doesn't cause stress marks but just transforming and posing the little turd does. Go figure. =\

I just mean a straight-up KO in different colors of plastic, not a 3P version. There have been upscaled Siege KOs going for about 50-75% of the retail price, there's no reason to think recolored 1:1 KOs of the cassettes would be that expensive.