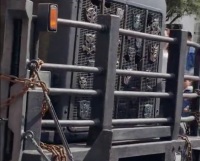 The flow of images of the Rise Of The Beasts Filming in Cuzco, Peru is not stopping. Following our recent round up of images from the “Carnaval Del Cuzco 1984” scene in Cuzco’s main square, now we can share for your a closer look at Scourge’s Grill and more Autobots And Terrorcons scenes in Cuzco streets.

TikTok user @deivissgatopardo shared an HQ video showing Scourge, Optimus Prime and the Terrorcon orange tow truck rolling across the streets and giving us a closer look at the menacing Scourge’s grill which holds a plethora of Transformers insignia. We can spot Autobot, Decepticon, Maximal and other badges. To top it all, we have can also catch a glimpse of Optimus’ license plate.

Courtesy of several Facebook users from Cuzco we have also added some new clear shots of all the cars. Also some new images reveal that it seems they are ready to shoot a chasing scene soon. Stay tuned with TFW2005 for more updates! Now see all the images attached to this news post, and a video of the “Transformers Caravan” after the jump. Then sound off on the 2005 Boards!

Transformers: Rise Of The Beasts – Closer Look At Scourge’s Grill And More Autobots And Terrorcons Scenes In Cuzco - Additional Images