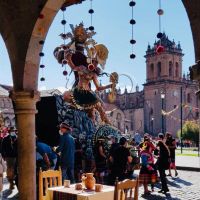 It’s been a pretty busy weekend for the Rise Of The Beast filming crew that has come back to Cuzco to shoot more scenes. We have some new videos, images an information about the recent filming days in the city in Peru.

Take your time to check all the images we have gathered for you after the jump, as well as a video with several scenes of the “Transformers Caravan” in the streets. Click on the discussion link and let us know your impressions on this new update!