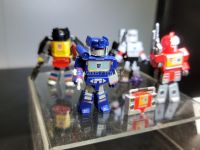 TFW2005 is at New York Comic-Con 2021, and our team has got some images of the new Diamond Selects Toys Transformers Minimates Wave 2.

Minimates are block-styled miniature action figures which were originally produced in 2002 and they worked with several popular franchises. We finally have a look at the second wave of G1 Transformers Minimates which consists of: Megatron, Soundwave, Grimlock and Blaster. each figure will include their respective weapons, plus Grimlock’s sword, Megatron’s energy mace and we can also spot a mini Blaster cassette player which should be included with the 4-pack of figures. The Transformers Minimates Wave 1 4-pack box was also on display.

See all the mirrored images after the break and then share your impressions on the 2005 Boards!

I'm getting a little worried. I was hoping for the mini Blaster but images on BBTS and such don't seem to include it. Its not in the description either. Wtf

The design on Blaster and Soundwave certainly looks like it would hinder the legs, especially Blaster.
I have G.I.Joe set on order, but I like characters choices better for the Transformers.

They are far from the best mini-figs of these guys, but one of my head cannons is the Cons keep Tripticon entertained with headmaster sized dolls.

Yeah, not for me. They've always struck me as knock off minifigs and I'm not even a fan of minifigs.

I have hundreds, maybe thousands of minimates.  I have always loved their style and usually loads of cool accessories.  These guys are no different.  It is definitly a style to get used to.  However, espeically with Marvel, it is great to get so collectible and well done figures at so small and so cheap.  I feel the same for these.  I got the first box, and these are amazing.  It will be one of the few non-transforming Transformers I will collect.

Dammit, I kinda want these ones too.

I've got somewhere between 1-2 thousand of them. Suffice it to say, I am the market demographic for these. But I just can't get behind the Transformer ones.

Now, the GI Joe mates? I am completely down for all of those.

The Battle Beasts were disappointing, however I can get behind these.

That said the lower half of Blaster is pretty bad.

Update: Images from the event thanks to TFW2005 team at the venue.