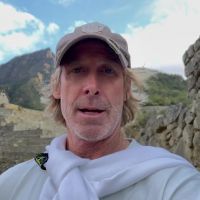 We have two small updates to share with you about the Transformers: Rise Of The Beasts in Peru.

First, we also have an unexpected surprise. Michael Bay has just shared, via his Instagram account, a short video showing him at Machu Picchu. He was all alone in the Inca’s citadel and he mentioned how amazing it was to have a wonder of the world all for himself. Keep in mind that, while Michael Bay is not the director of his movie, he is one of the producers.

Then, we can confirm that the movie crew will be heading to another ancient Inca fortress: Sacsayhuaman. Filming will be on October 6th and 7th, so the fortress and surrounding areas won’t be open for public. According to a video from a well-known Peruvian TV channel, there are plans for a scene where a stone wall will transform into a “golden Autobot/robot”. The reporter even shows the location and the aforementioned stone wall in Sacsayhuaman. Take this with a grain of salt since we are yet to verify if this was accurate information.

Click on the bar to see some images as well as a YouTube mirror of Michael Bay’s video from Machu Picchu. What do you think of these updates? Let us know your impressions on the 2005 Boards!