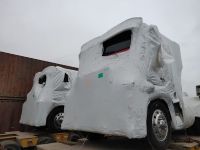 We have some updates about Transformers Rise Of The Beasts filming over the world: Optimus Prime Truck is finally in Cuzco and Mirage has been spotted in Montreal.

Via Transfomrers Perú and Diario Correo website we can confirm that Optimus Prime truck has arrived to Cusco. While filming in the ancient Peruvian city started some days ago, we hadn’t seen Optimus Prime yet. The truck was covered, but it was spotted while it was being parked in a closed location together with a mysterious black van.

Via Instagram users @ramdeenstudios and @mtl_phonetographer we can report that Mirage has been spotted in Montreal (in fact, three of them) and he was seen as part of a scene where he’s being chased by 2 police cars.