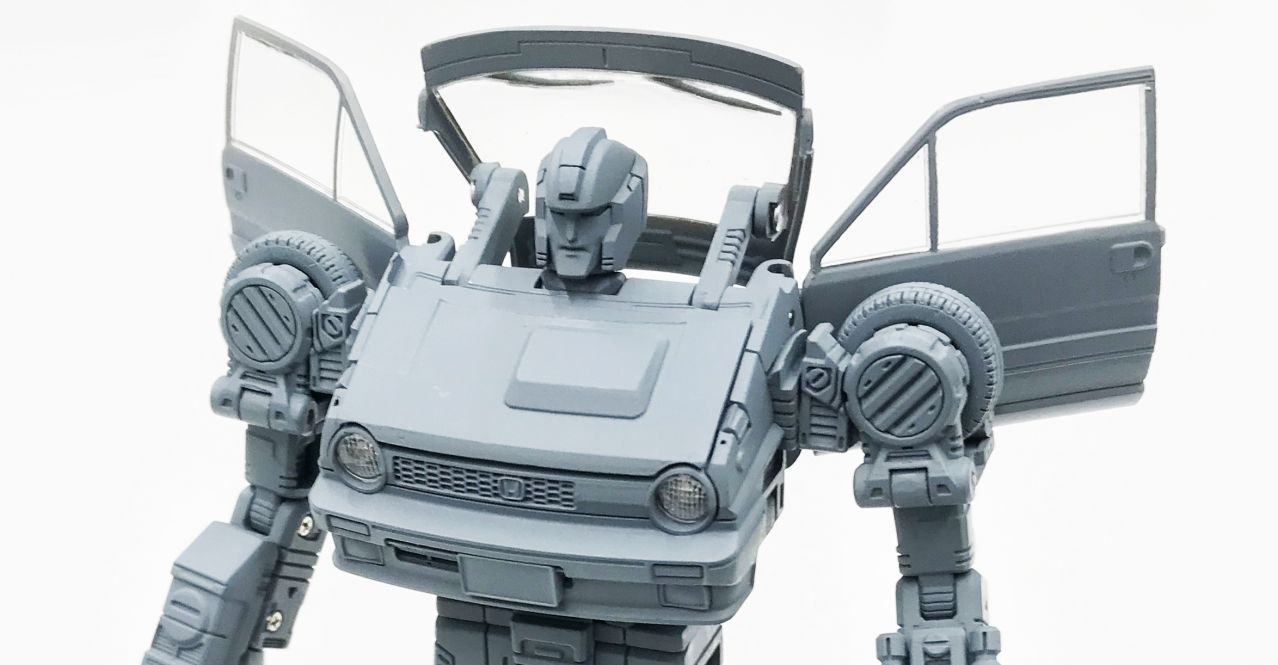 To our surprise, the official Honda Twitter have just revealed our first images of the gray prototype of the new Transformers Masterpiece Skids.

Skids’ first sketches were revealed in December 2020 and now we have a clear look at the robot and the alt mode of the latest installment in the Masterpiece G1 collection. Some fans may notice that the Honda City Turbo alt mode is realistic and robot mode seems to be not cartoon-accurate inspired as the latest Masterpiece releases. The Tweet says that these images were published today in the Figure King Magazine No.277, so we may see some more images in the following hours.

Check out the new images after the break and then join to the ongoing discussion on the 2005 Board!

This will look so nice next to G2 Sideswipe…

Goes back to what I was saying when people wondered why Skids of all guys got an MP. Between him and Starscream they've been able to churn out a handful of quick repaints to help fill out the MP line while working on stuff like Raiden.

And here I was thinking that we'd never see an MP "The Fallen."

I said the same thing to myself. Another $75 out the window next year.

Lol, and here I was JUST saying I didn’t need it.

Dammit. Why they have to go and make him look so cool?

I said the same thing to myself. Another $75 out the window next year.

Dammit. Why they have to go and make him look so cool?

her, it's supposed to be a her, if we follow the Diaclone storyline.

Dammit. Why’d they have to go and make him look so cool?

I wasn't the biggest fan of Reboost and the mould so I think I'll just skip this.

Well it looks like we've got a much more toy-styled head (or at least partial depending on if those lips are painted or molded) for the mold now. Maybe a toy-colors Skids might happen.

so is anyone making filler pieces for the holes in the arms and legs? that is really the only sticking point I have with this mold.

This is coming soon if anyone is interested. Not sure what version this is
Transformers Masterpiece MP-53+B Diaburnout

This is coming soon if anyone is interested. Not sure what version this is
Transformers Masterpiece MP-53+B Diaburnout

Meh. I’ve already done 3 of this mold, I’m not going back in a fourth time.

I can't imagine he will have the wrong head like the Hasbro version. What would even be the point of that?

If so it will be a re-use of the Overboost/Crosscut head.

So, it's Burnout, Reboost, Skids and Crosscut all using the same mold on the deluxe and MP scales, or is there even more?

Any idea what color scheme they're going with on this one? I see that it's called "Diaburnout" so I assume it's a diaclone color.

If so it will be a re-use of the Reboost/Crosscut head. (D'Oh! and corrected)

Any idea what color scheme they're going with on this one? I see that it's called "Diaburnout" so I assume it's a diaclone color.

I'll answer my own question…. Looks like it'll be black and red. Black main body and red highlights if the images I found are correct. BTW, I didn't find MP-53+B pics just whatever popped up for "diaclone burnout".

I've spent most of the last few days in bed with Covid sleepiness, and I've had various bots keeping me company.

MP Skids is just excellent, isn't he? Probably the best MP figure since Sunstreaker, and one of the most fun to fiddle with, right up there with Wheeljack and Inferno. This is what I used to love about the Masterpiece range, before it dipped in the 40s.