PREVIEWSworld announced the upcoming arrival of War For Cybertron Nemesis Prime to the Threezero line of 10″ collectible figures, which includes WFC counterparts Megatron and Optimus Prime, limited to a 1,000 piece run with an SRP of $179.00 and due in shops July 28th.

Check out the full product details and pictures after the jump!

Update: Look for pre-orders from our site sponsors!

From Threezero. Hasbro and Threezero are thrilled to introduce the evil leader Nemesis Prime in the Transformers DLX Collectible Figure Series! Using the Optimus Prime sculpt from the Transformers: War For Cybertron Trilogy, this figure is available exclusively for PREVIEWS in North America! At 10″ tall, the Transformers: War For Cybertron Trilogy – DLX Nemesis Prime collectible figure features approximately 50 points of articulation, a die-cast metal frame, and LED illuminated eyes and chest cavity. Accessories include Ion Blaster, Energon Axe, Energon Shield, a total of five pairs of interchangeable hands, and a DLX Action Stand for various expressive poses. Like other DLX series figures, Nemesis Prime features a die-cast metal frame for increased playability, with a finely-detailed paint application that showcases the war-torn weathered style representative of the War For Cybertron Trilogy. The Nemesis Prime color scheme is a limited edition variant that does not appear in the series and this PREVIEWS exclusive figure is limited to only 1000 Pieces, so order now!  Requires AG13 x2 Batteries, not included.

Don’t miss out! Use comicshoplocator.com to find a local retailer and pre-order yours today. 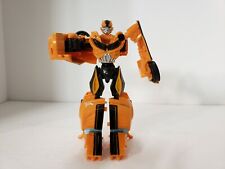 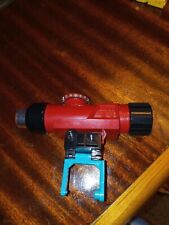 Preordered one from BBTS. Interesting it’s higher prices than Megatron and Optimus

Nemesis looks great with that axe

Not a massive fan of stuff like this, but this is making me sold

I can understand some people want premium format figures, I can never and will never understand non transforming Transformers especially awful funkos and absurdly expensive ones like this. I mean iy is transformers, they should transform?

To me, personally, Transformers is a brand. The characters are what matters, and a non-transforming figure, if done well (like… not the RED line), is much better than a crappy or mediocre transforming one, regardless of cost (I collect Hot Toys, so for some, I can see the cost being an issue).

I do agree with you… Funkos suck, I apologize to all who enjoy them though, everyone has their own things.

I can understand some people want premium format figures, I can never and will never understand non transforming Transformers especially awful funkos and absurdly expensive ones like this. I mean iy is transformers, they should transform?

I'm not knocking it. But I think would have been a hell of an opportunity for 3A to get some love for making premium transformable figures.

You're an adult who buys children's toys and this is where you draw the embarrassment line?

You people crack me up, so dramatic

Hasbro’s not gonna fuck you bro

BBTS also has this available for preorder now.

The DLX line is prettt niche to begin with, and this style of figure might be better suited for the Movie designs, but it's interesting that either ThreeZero felt the Netflix series was enough of a thing to make expensive figures of, or that Hasbro may have approached them with the idea.

I'm a sucker for the black and teal so I'll happily add this to the Nemesis shrine.

I also just saw the emgo vid. While I don't collect these types of figures, I can easily admit that this figure makes my transforming siege version look like a Happy Meal toy. The difference in quality, craftsmanship and build is significant.

I watched EMGOs review and this thing is awesome. I had my doubts but its awesome. We have a good selection of non-transforming figures to choose from these days. We got RED Line from Hasbro, Super7, Three Zero and Flame Toys.

Up on EE, for those who are interested. Limit 1 per customer, so I will pick up my second copy from an LCS.

What the heck? It looks like a mainline figure but more expensive and it doesn't transform…

I\'d be legit embarassed to own this.

You're an adult who buys children's toys and this is where you draw the embarrassment line?

You people crack me up, so dramatic

Anime thrusting pose? Hell yeah, but I definitely won\'t be buying this.

A repaint of a figure based on a cartoon

Which is based on a figure

Based on the original cartoon

And much more expensive

IMO this seems incredibly redundant, especially when the onscreen models are literally almost exact representations of the WFC toys.

I\'d be legit embarassed to own this.

Not interested in the Primes but I would buy a Siege Sideswipe version of these.

While I very much appreciate that the Threezero DLX line is all extremely well built, painted and articulated (I have all the live action figs either in hand or on order), I feel such efforts are waisted with the WFC designs. They look little different from their $30 mainstream counterpart. I also don't care for the WFC designs so that makes me very biased. Fantastic for those whom like this sub line of the DLX.