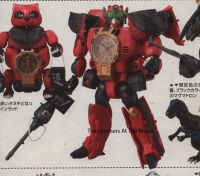 Courtesy of Transformers At The Moon we can share for you images of the rare Beast Wars Neo Lucky Draw Red Heinlad.

This is another rare and mysterious campaign price figure released only in Japan while back in 1999. This a special red and black redeco of the Heinrad toy. This new images come via the pages of the recently published Transformers Beast Wars Beast Generation Book (only in Japan). This was a very obscure item, with only one small pic seen before. Now a new challenge comes: Try to find the toy itself. It is still unclear how many of these toys were made, but many of the lucky draw items from that era were limited to 10 units or even less.

Check the mirrored image on this news post after the break and the sound off on the 2005 Boards! 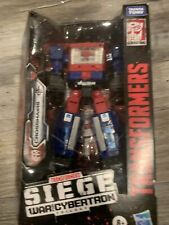 wait he\'s a racoon and a wach at the same time? IM PAYIN DOUBLE

Scored the original/default color waaaaaaaaaay back in 2010 at ebay from a HK seller. Great alarm clock, runs on AAA iirc, got rid of the batteries as I wanted to avoid shorting them out if the batteries leak.

Too bad Takara or Hb never re-issues/designs type like these toys that have a real practical use. Heck, even the original robot who would become Blaster was an actual functioning radio.

More of the other BWII Maximal repaints

Transformers At The Moon – http://www.transformertoys.co.uk

I can NOT believe Ive never seen these, just WOW!

That would result in poor circulation

… even for a Lucky Draw.

I would really dig an updated Magmatron. Such a interesting and kinda ridiculous design…but Beast Wars in some facets leans into that.

Its a tanuki with a watch, and…noticeable gentleman bits? Well! At least they didn't shy away from tanuki anatomy and lore.

The squid dude is cool.

I dunno, but it should ALL be brought back.

Transfans has posted some scans of these too. Most are the same as TF The Moon's but the first pic seems to be a scan of the book's page.
TransFans

I blame the isolationism/localpatriotism of japanese TF fans. I mean how many you even know who post on these boards? I bet there are other similar hidden things we do not know about simply because not many of them check or post on these boards. And in the era of a (mostly) functioning google translate that makes me able to read most japanese pages in english (and even buy stuff from Yahooauctions via J-Subculture) there is no excuse for this isolation anymore.

That Black looks like Gray Magmatron, and besides it lacks a bit of gold and blue, I want to think that it was a prototype of the Black Magmatron that finally came out and that the flash in the photo made it very clear. 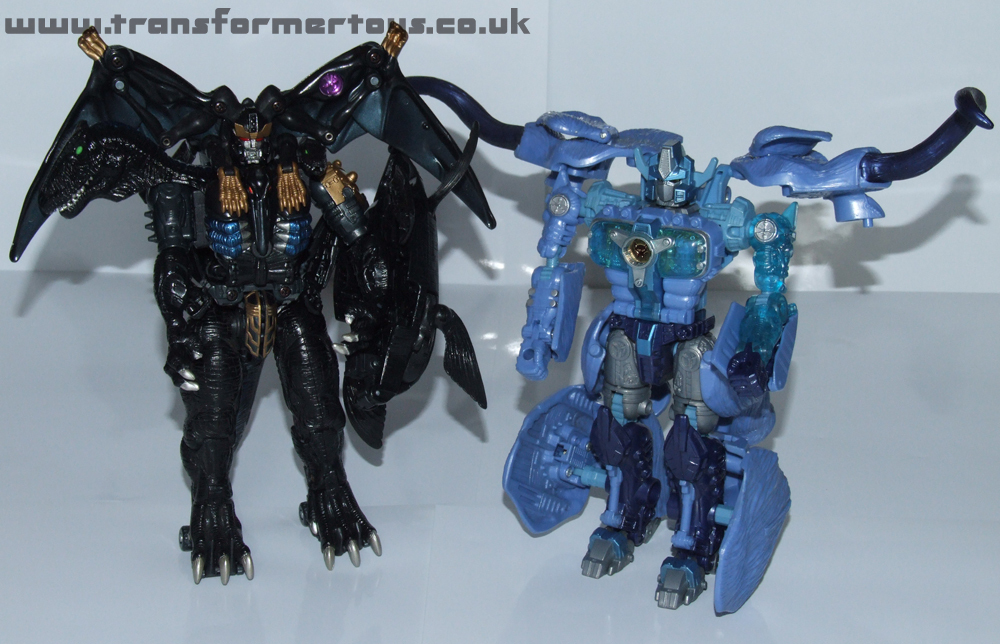 EDIT: I also see that Blue Big Convoy the blue is painted in different areas, I will continue to think that they were prototypes before the final product came out.

I never knew these existed, thanks.

Whoa hey…Is that appropriate for the front page?…Just hanging right out there for all to see, huh?

Suddenly these things become acceptable when they are cultural differences.

I mean, to my knowledge the Ghibli film about Tanuki (Pom Poko) wasn't censored either and they literally bounce around on their balls in that.

I mean, I would have loved that all black Magmatron.

Is that a big convoy LD figure of is it ultra mammoth. If you look closely the tusks look white where big blue convoy had blue tusks

Whoa hey…Is that appropriate for front the page?…Just hanging right out there for all to see, huh?

It's not as 'explicit' as other Tanuki statues that exist, but I think it resembles joints / tucked away parts enough to be okay.

They should repaint him as this guy.View attachment 28873504

Not that I recall, but we may have missed that pic.

Different event. Here is a picture of what I am referring to. I even posted it here before, but nobody cared.

It was on display at one of the transformer anniversary events with lio convoy.

Not that I recall, but we may have missed that pic.

I do like the cotton candy Claw Jaw and the salmon Spittor.

This was our only image of this figure so far. 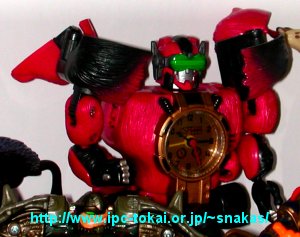 It was on display at one of the transformer anniversary events with lio convoy.

Whoa hey…Is that appropriate for the front page?…Just hanging right out there for all to see, huh?