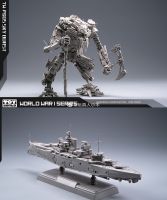 Third party company Toyworld is showing us, via Weibo, the next installments in their World War I & II series: TW-FS05 Sky Burst (WWI Battleship Jetfire).

These figures, planned for the Studio Series scale, are inspired by the World War I & II Transformers seen in The Last Knight film. In a very original design choice, Jetfire transforms into a powerful WWI battleship. Robot mode still looks recognizable as Jetfire’s design in ROTF, with a solid and detailed alt mode. To make things even more interesting, it includes an stand for the battleship and Jetfire can still combine with Studio Series Optimus Prime.

We still have no concrete information about price or release date, but stay tuned with TFW2005 for more updates!

Click on the bar to see the mirrored gallery on this news post and then sound off on the 2005 Boards! 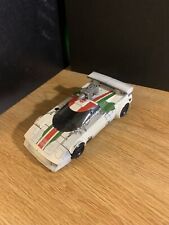 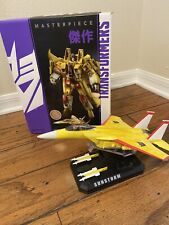 Reminds me what's this guy gonna come with? Other than the stand and his axe/cane

Reminds me what's this guy gonna come with? Other than the stand and his axe/cane

The supplier just told me that Sky Burst might be launch next month.

That image of this guy combined with Optimus has so much Kantai Collection/Azure Lane vibes.

$199 is even more expensive than their standard F01 and F09 Optimus. I know it includes Starscream body but F09 is bigger and also has plenty of accessories. Even the $135 Starscream is also quite pricey for their size.
$120-140 Jetfire and $90-100 Starscream was what I expected after collecting Bee and Bulldog.

It seems to be a smart (yet annoying) move by TW. They release normal version with Starscream parts, and then repainted versions without those extras but even more expensive.
So I just don't think it's possible for any repaint of these to be cheaper.

Until there are some discount or I earn a huge project, I'm also out and not getting anything else even Barricade and Hot rod.

I got the last one at TFSource, and although I baulked at the price, I hadn't found it anywhere else and didn't want to miss out whilst 'hoping' that it would later appear somewhere else.
I guess that is where they have us over a barrel. Prices go up because unlike a few years ago demand for 3rd party is becoming ever greater than supply.

Just saw the preorder prices and yikes, I'm not seeing where the 200 bucks comes from. Hopefully someone can get it and see how the combination with Prime works but unless I see a price drop, I might be out too.

Already up at ShowZ for $199. So Not a huge difference than.

Yeaaaah even when accounting for TFS's insanely inflated prices, I'm guessing this guy is gonna land around at LEAST $175-200 at places like showz. And for that reason, I'm out.

I'm okay with it if it looks cool ya know? For example UT Dragoon looks like he has a beard to me which I think looks good on him. A badass knight with a beard. Works okay with Bayverse Hound too. Although that is mostly because without he looks off.

Is it the same from comics?

They likely chose to make him the whole ship because, unless they planned to sell other figures to make up the other parts of the boat, no one would by a figure that turned into half a boat.

While I’m actually glad they made him the entire battleship (and prefer it) I’m pretty sure I would’ve bought the citadel only version too, unless they handled the rest of the ship poorly or something. Random thought but I think that would be cool to have as a legends figure

One of those friends huh?

While you are all arguing about ships and planes, a friend of mine saw that and shouted "Since when Jetfire transforms to the Titanic…..?"

I want to believe he didnt see the gun batteries….I really want to….

One of those friends huh?